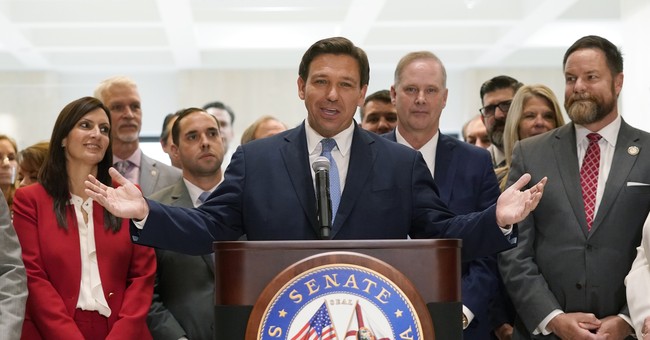 As we’ve previously reported, the mainstream media and the “progressive” left have been braying like mules for the last several weeks over the Florida parental rights legislation that critics have falsely labeled the “Don’t Say Gay” bill.

To his credit, Gov. Ron DeSantis has responded accordingly to the outcry and various fake narratives surrounding the bill, noting that it does not in fact “ban” saying “gay” in public school classrooms and that in actuality, what it does is prevents age-inappropriate lesson plans on sexual orientation and gender ideology in K-3 classrooms, and enshrines parental rights when it comes to discussions of such sensitive subject matters with children.

Upset that their attempts at getting DeSantis to look like the bad guy over this bill have at best had “mixed results” in terms of polling, the media have taken to suggesting that DeSantis’ defense of it as well as him supposedly “wading into culture wars” that Democrats started might backfire on down the line with Florida voters.

The problem with that argument, however, is that even among Democrat primary voters, DeSantis is faring well on this issue per a recent poll taken on the Democrat gubernatorial primary race:

More specifically, and as “Florida man” reporter Marc Caputo observed, curiously absent from that tweet and the article it referenced was where Democrat voters in that same poll stood on the most controversial aspect of the parental rights bill:

FL Capitol Dems opposed it & made it a top messaging priority

(This is unmentioned for some reason in the story I QTd. This poll jibes w/others I’ve seen) https://t.co/6HBMz2MW4d pic.twitter.com/bfS9ulp58A

The elephant in the room here for Democrats is that there has been a noticeable shift in said “culture wars” over the last couple of years when it comes to parental involvement in their children’s education, which we saw play out against Democrats in the 2021 gubernatorial election in Virginia.

Conservative voters were mobilized against Terry McAuliffe, who infamously declared that he didn’t think parents should be telling schools what they should teach during a heated back and forth with Glenn Youngkin about explicit materials being taught in classrooms, and who also repeatedly said in contentious interviews that the debate over CRT being implemented was nothing more than a Republican “dog whistle.”

That had a ripple effect not just with conservatives but also with independent voters and conservative Democrats who refused to give McAuliffe a second (non-consecutive) term as governor in the state in part based on his iron fist declarations about public education and the role of parents in that process.

In my opinion, a very similar scenario is playing out in Florida, where we maybe could see DeSantis be given a reelection victory of resounding proportions in the state among the same type of voters and then some because of the way he’s handled these “culture war” issues when they’ve cropped up.

Parents and those who agree with them every time these controversial topics come up for public debate have made clear that they are a force that will have to be reckoned with, and that is very bad news for Democrats, especially in a climate where Dems have anointed themselves as the ultimate arbiters of what’s best for children.

You love to see it.

Related: The Most Important Thing to Remember in the Lia Thomas Debate