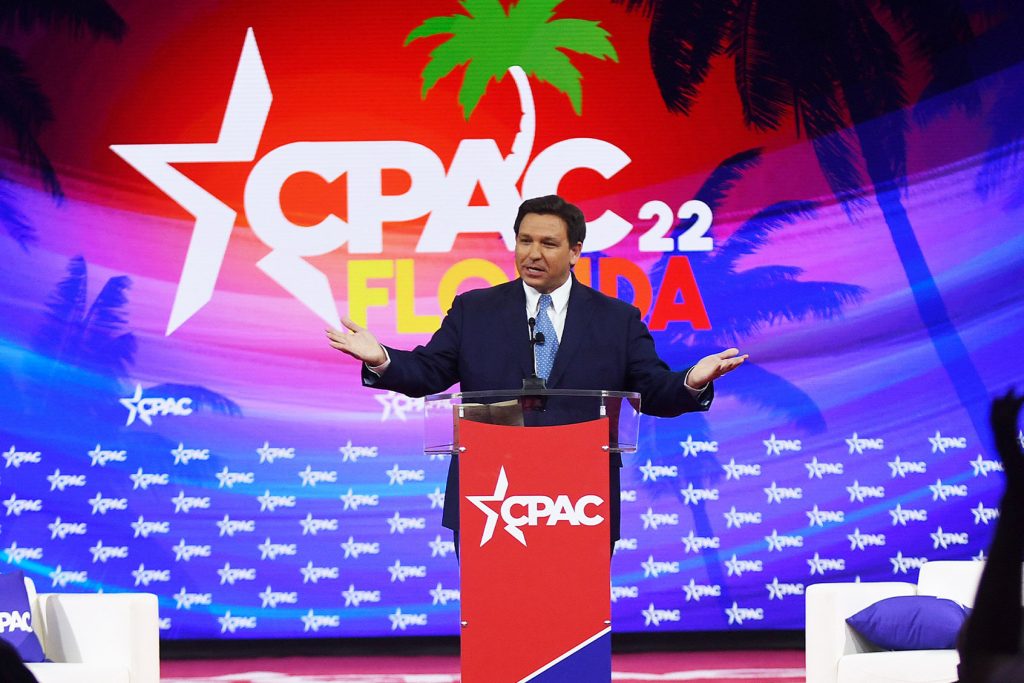 Vladimir Putin recently launched an intercontinental missile meant to threaten the members of NATO with nuclear annihilation. Florida Gov. Ron DeSantis has gone after the Walt Disney Company as a warning to all “woke” corporations.

Call it the masculinity-obsessed right’s inter-corporate missile, resetting the traditional terms of mutual grift between corporate America and the Republican Party.

The conservative right has been squirming uncomfortably in recent years as it watches corporate America introduce diversity, equity and inclusion (DEI) programs, and apparently Disney’s belated mild rebuke of DeSantis’s “Don’t say gay” law led to this showdown between the formerly more-than-chummy CEOs of corporate America and Republican politicians.

But the Trump cult is not your grandfather’s GOP, or even your father’s. (I think it’s fair to call it your conspiracy-obsessed uncle’s or white nationalist cousin’s GOP.)

As others have pointed out, this was gratuitous: DeSantis already had his victory, when he signed the law in March prohibiting discussion of sexual orientation and gender identity in the early grades of public schools. But, as Charlie Sykes writes at the Bulwark, this move against Disney — taking away its self-governing tax-break status after more than a half century — was about retribution: “Florida Republicans made no secret of their motivation here: it was payback, and a mailed-fist threat to other businesses who might engage in wrongthink.”

One instantly thinks of the disgraced former president’s reflexive threats and vindictiveness, always hard to distinguish from the Mafia’s characteristic method of persuasion: “It would be a shame if something were to happen to your Reedy Creek status.”

Which reminds me of a story I heard when I worked at a restaurant in New York, some years back. One of the managers, Johnny, told me a story about a little guy who came in one day, before the place had officially opened for business, asking where he wanted the cigarette machine. Johnny had responded, “Oh, we don’t want a cigarette machine.” The little man paused, frowned and looked at him pointedly. He said, “I didn’t ask you that. I asked you where you wanted it.”

That sums up the choice we are facing in America: We can have a democracy, or a Russian-style mob government run by autocrats and oligarchs.

Is this when we will finally see if corporate interests are really in charge in the United States? I know I’m uncharacteristically rooting for corporate America in this melee. Most business leaders, I think, fully understand the vast economic advantages of this little thing called democracy.

If I were Bob Chapek, CEO of Disney, I’d be tempted to simply announce a five-year plan to move Disney World out of Florida, to, say, somewhere near Atlanta. (Given that rising ocean levels due to climate change will likely start affecting the coastal areas that bring so many tourists to Florida, it might well be time to plan that move anyway.) Even better, I might choose my hometown of St. Louis, which was Disney’s original plan for the location of its second theme park. (I would be remiss not to note that Colorado Gov. Jared Polis, a Democrat, has tweeted his offer to provide a new home for Mickey Mouse and friends.)

The overarching intent of DeSantis’ move (as in the arcing of a so-called Satan II missile) is to send a Putin-like warning to all corporations who view their DEI efforts as the right, and smart, thing to do — for the business, for employees and for shareholders. Companies are trying to attract the best talent and are moving to sweep away impediments to women or people of color reaching executive-level positions, and to be more welcoming to members of the LGBTQ+ community and people who face physical or mental challenges.

You could view this corporate effort as one embracing the traditional American experience of strength in inclusivity: We are stronger when we include more voices, when we don’t leave people behind. The melting pot, say, without quite so much “melting” needed. We take you as you are. How many times does it need to be pointed out that immigrants believe in American values and score higher on basic tests about citizenry than a goodly portion of citizens?

Corporations are embracing the traditional American value of strength through inclusivity — but that doesn’t go down well with white nationalists or squeaky-voiced Fox News hosts.

That message does not go down so well with members of the religious right or white nationalists, or with men like Tucker Carlson, who are just in a tizzy about masculinity issues. (How is the very soft-looking Carlson, with his squeaky voice and constant complaining, understood by anyone as a spokesman for the “masculinity movement”?) So they fill their time with conspiracy theories and memes about Nancy Pelosi giving illegal aliens free cell phones, to distract themselves and their friends from real-world crises like the pandemic and climate change.

Leaving certain people behind — members of “out” groups — is not really something that serves corporate interests, but it remains a core tenet of some religions (remember the popular “Left Behind” series of novels?). Republicans are doing everything they can to leave voters of color behind by making it more difficult to cast ballots in urban areas, or by removing people from the rolls entirely.

Putin continues marching his troops into Ukraine, ruthlessly bombing its cities, targeting civilians and taking all the territory he can (albeit not with much success, to this point). Something similar is happening with the religious right in America, which is fighting a holy war on several fronts and destroying everything it can: public education, women’s rights, LGBTQ+ rights, voting rights.

We should be seeing a map every night on the news of the thrusts (Fifty “classical” charter schools ordered by Tennessee? A senator says the Supreme Court was wrong to make interracial marriage legal?), and how much territory of our democracy has been overrun.

Can anyone do that for us — show the mounting losses in human rights and human dignity? In fact, let’s show the losses and show the forces of democracy making gains. There’s a war going on here — and in Europe — just as in Ukraine. In May, the Conservative Political Action Conference (CPAC) will descend on Budapest, with Hungarian Prime Minister Viktor Orbán, an autocrat and Putin admirer, as keynote speaker. Can there be any doubt that Putin was partly motivated to start his war when he did to roil NATO countries, potentially get his lackey back in office in Washington and maybe put Marine Le Pen in power in France?

Well, here’s to NATO holding strong — and Vive la France. (While we’re at it, hura to the Freedom Movement in Slovenia.) Let’s hope America’s voters learn from the mainstream media what is truly at stake and do as well as our French allies, without whom we would never have created our democracy in the first place. May their example help us to do it again.

Read more on Ron DeSantis and his feud with Disney: