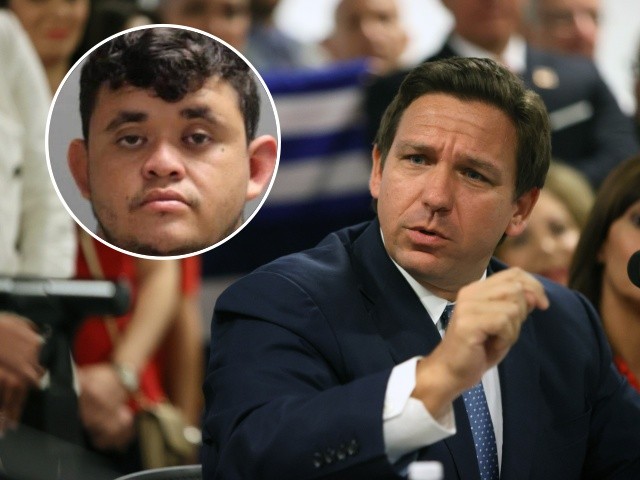 As Breitbart News reported, 24-year-old Yery Noel Medina Ulloa, an illegal alien from Honduras, was arrested and charged with murdering 46-year-old Francisco Javier Cuellar, a father of four children, after police said Ulloa stabbed and beat the man to death in his living room.

Ulloa initially came to the United States-Mexico border months ago, posing as an Unaccompanied Alien Child (UAC) named “Reynel Alexander Hernandez” in the hopes of being released into the U.S. interior.

Ultimately, Biden’s Department of Homeland Security (DHS) was duped and Ulloa was released via the Department of Health and Human Services (HHS) program that resettles UACs with sponsors and family members across the U.S.

In response, DeSantis slammed Biden for carrying a “reckless” Catch and Release policy that facilitated the release of more than half a million border crossers:

“[Ulloa] has been detained, should have never been in this country, to begin with, and definitely should not have been dumped in the state of Florida,” DeSantis told the New York Post in a statement.

“This is not the way you keep people safe, it’s reckless, and it’s wrong,” DeSantis said. “… I’m going to see what we can do … of course, [I] have a pending lawsuit against the administration challenging their catch and release policies. But this is what happens when you engage in reckless policies.”

Last month, a Post report detailed how Biden has been flying thousands of border crossers and UACs to various states, including New York, Connecticut, and Florida, in the middle of the night. The White House later confirmed the flights.

DeSantis has been intensely proactive against Biden’s lax interior immigration enforcement. In April, for instance, he directed a statewide crackdown that requires state agencies to notify local police every time a criminal illegal alien is released into their community as a result of Biden’s orders.

“These are convicted felons who are here illegally. If you can’t remove them, then what do you have? Just a complete … open border,” DeSantis said at the time.

John Binder is a reporter for Breitbart News. Email him at jbinder@breitbart.com. Follow him on Twitter here.