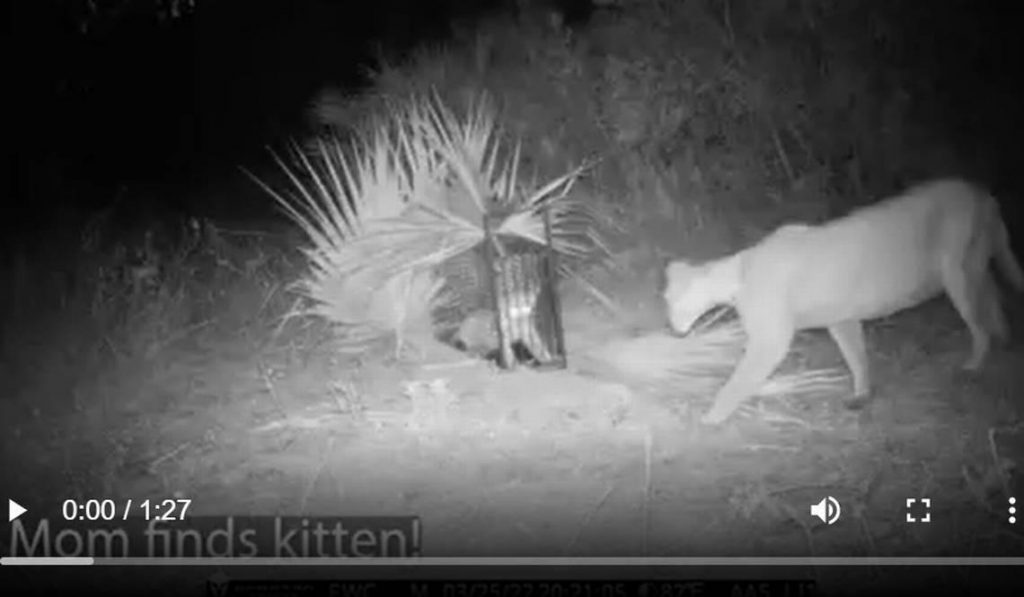 Warning: This video may be the cutest thing you have seen in a while.

Thank you, Florida Fish & Wildlife Conservation Commission for capturing it and making our weekend.

On Friday, the agency posted a black and white clip on its Facebook page of a beautiful reunion between a Florida panther and her lost kitten, and then gave followers the back story:

Back in March, after the 4-month-old somehow got separated from her mother in Collier County, staffers launched a search in the area, to no avail.

The kitten was taken to Naples Zoo and a towel with its scent was placed in the area where it was found.

When that didn’t work, biologists then tried to attract the Florida panther with her actual baby, by placing the little one in a cage in the same area. After two days, the FWC was almost about to give up, the agency’s post says. Finally, after the third night, Mom finally appeared.

Livestream video captures the sweet moment the adult panther happens upon the cage and the kitten begins to meow loudly in recognition.

A biologist opened the cage, the Fish and Wildlife says, and out pops the kitten, scampering over to Mama.

“Reunited and it feels so good,” reads the text on screen, referencing the classic “Peaches & Herb” song.

Later footage shows the pair together walking, Mini Me tailing closely behind.

Though the kitten is wearing an expandable collar in the clips, it will soon drop off, the FWC says, adding both animals will be monitored in case they happen to split up again.

The post ends with a reminder that Friday is Endangered Species Day, and the Florida panther’s current status is listed as endangered. There are only about 130 left in the wild.

READ MORE: How did another endangered Florida panther die? The killer was on the road