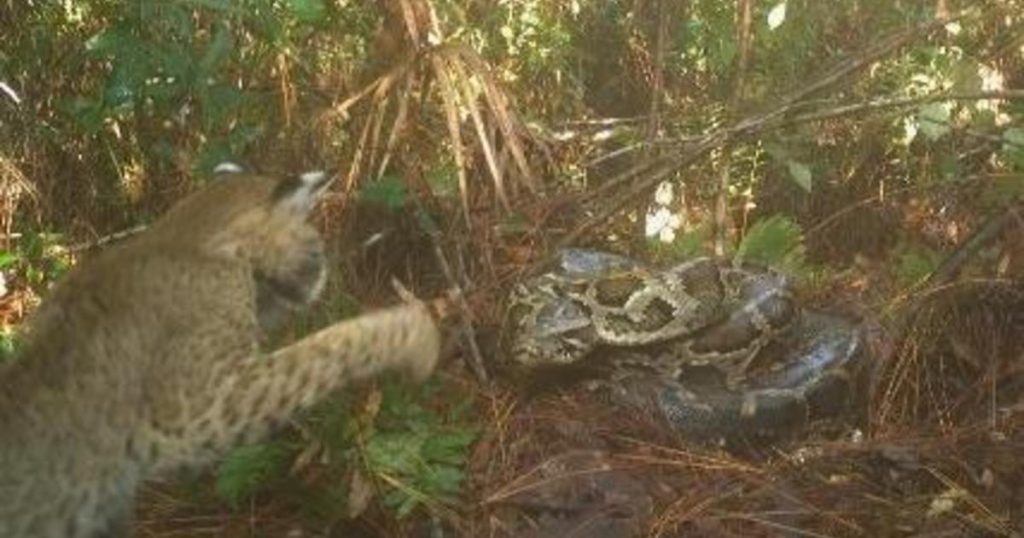 Unprecedented video shows a bobcat raiding the unguarded nest of an invasive Burmese python for eggs and a standoff that followed when the 14-foot snake returned to her nest in the Florida Everglades.

The footage in the Big Cypress National Preserve marks the “first documentation of any animal in Florida preying on python eggs” and the first evidence of any animal in the Everglades fighting back against a Burmese python, according to a report by the U.S. Geological Survey.

The trail cam video, captured by USGS cameras from June through August of 2021, shows a curious bobcat stalking the python’s nest of eggs. The native animal can be seen on June 1 approaching the unguarded nest and eating the eggs, then returning the next day, digging at the nest and biting more eggs.

CBS Miami reports that over the course of several days, the male bobcat can be seen “consuming, trampling, caching, and uncovering the eggs while the python is gone, but also confronting the much larger snake and trading blows on at least on occasion,” according to the USGS.

Researchers said the photos suggest the approximately 85-pound python at one point struck at the bobcat, which weighed about 20 pounds. They said subsequent images show the “python back atop her coils, facing the bobcat, which can then be seen swiping at the python from the left side of the frame, then moving to the right as the python visually tracks the bobcat.”

Days later, when biologists arrived, they moved the female python and found the nest had been destroyed, counting 42 “inviable or destroyed” eggs.

Over the next several weeks, the camera captured a bobcat “investigating the site and scavenging the destroyed eggs and eggshells,” researchers said.

The research was published last month in the journal of Ecology and Evolution.

Captive Burmese pythons let loose by Hurricane Andrew’s destruction in 1992 have flourished in the southern Florida ecosystem, decimating local species in the process.

Today the Everglades are overrun with the giant snakes and it’s had devastating consequences. A 2012 study by the U.S. Geological Survey found that after Andrew exacerbated the Burmese python invasion of the Florida Everglades, populations of raccoons and opossums dropped roughly 99 percent and some species of rabbits and foxes effectively disappeared.

Stephen Smith is a senior editor for CBSNews.com

Thanks for reading CBS NEWS.