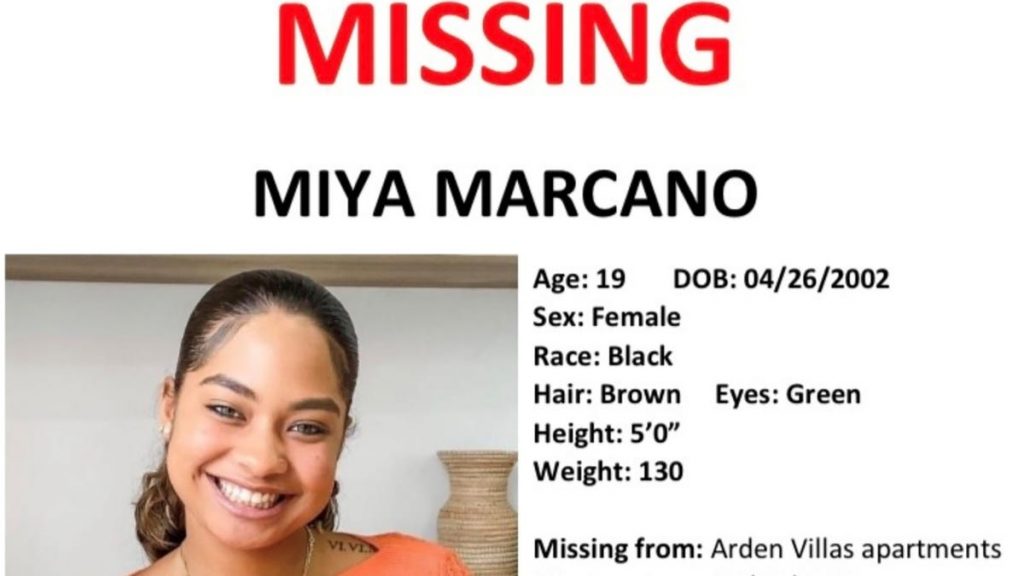 Authorities in Florida are still searching for a missing 19-year-old college student after a person of interest in the case was found dead Monday in what deputies said was an apparent suicide.

Miya Marcano, a student at Valencia College in Orlando, Florida, was last seen Friday around 5 p.m., the Orange County Sheriff’s Office said. She lived and worked at Arden Villas, an apartment complex about a mile from the University of Central Florida — one of the largest schools in the country by enrollment.

On Friday, she was working at the apartment complex and got off around 5 p.m. About 30 minutes prior, a maintenance worker at the complex used a master key fob to access her apartment, Orange County Sheriff John Mina said.

That maintenance worker, Armando Caballero, 27, had worked at the complex since June and was being investigated by the Sheriff’s office, Mina said, and was considered a person of interest in the case.

“He had demonstrated a romantic interest in Miya. This was repeatedly rebuffed by Miya,” Mina said.

Do you know where they are?: 43 missing persons cases the FBI needs help solving

‘Some good from this awful tragedy’: Gabby Petito family remains confident in FBI

USA TODAY Opinion: It’s OK to want justice for Gabby Petito and acknowledge the thousands still missing. We should.

STILL MISSING: The red shirt (left) is what Miya Marcano was wearing when last seen on 9/24. She also had on jeans & a black hoodie.

On 9/27, person of interest Armando Caballero was found dead in an apparent suicide.

Caballero had told deputies during questioning he’d last seen Marcano at work around 3 p.m. Mina said deputies had issued an arrest warrant for him after discovering that he used a master key fob to access her apartment and were looking for him over the weekend.

But on Monday, authorities found Caballero dead at another apartment complex he also worked for in Seminole County, which is just north of Orlando. Mina said “it appears he has killed himself.”

“Miya is still missing. Her disappearance is suspicious and our detectives and her family members, obviously suspect foul play,” Mina said.

Her aunt, Pia Scarbriel Henry, offered a desperate and tearful plea for Marcano to come home, sending a message directly to her niece.

“I know you’re alive. I know you’re out there,” she said. “You know we will never sleep one night until we get you home. We miss you. We know that you’re strong.”

Her aunt detailed how each member of her family is doing everything they can and praying for her safe return home.

“You are the family’s princess,” she said. “This family believes in God. We believe in hope, and we have faith.”

Mina said the Sheriff’s office has poured resources into finding Marcano but asked for anyone who may have seen the 19-year-old or Caballero call law enforcement at 407-836-4357.

Everyone’s talking about Gabby Petito: But they’re having the wrong conversation, experts say