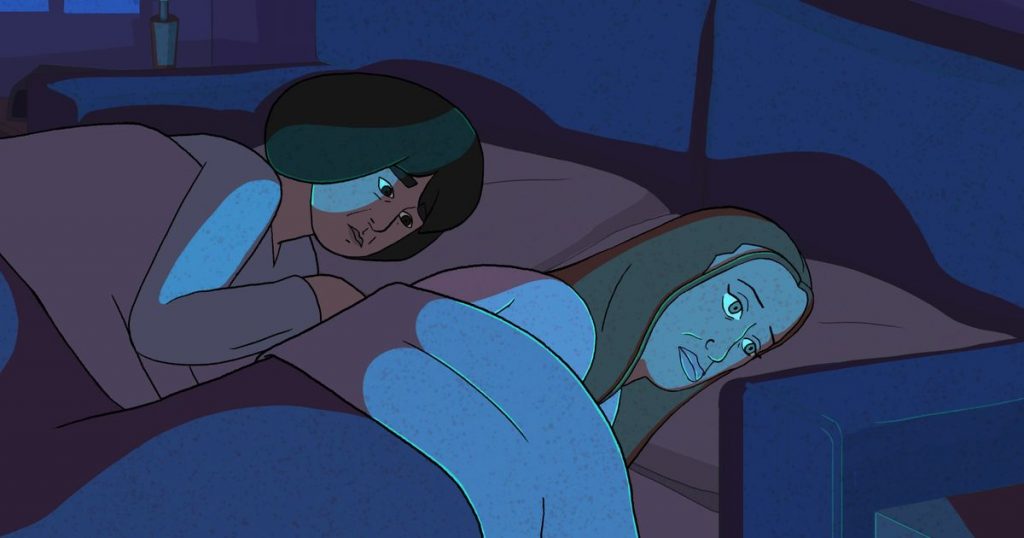 PEN15 is one of the most formally experimental shows on TV these days — something for which it doesn’t get nearly enough credit. Full of elaborate trick shots and absurdist touches, the show’s second season really stood out for its visual aplomb. That gave me high hopes for its one-off animated special, which would give it an even bigger sandbox to play with.

Unfortunately, “Jacuzzi” is a letdown in the visual department, feeling more like a 2 a.m. Adult Swim castoff than a thoughtful riff on its sophisticated source material. Executed in a flat, clip-art-esque style, the animation features little to no facial movement, a huge liability for a show that’s so reliant on the performances of its gifted leads. The scenes filmed through a “camcorder” are outright headache-inducing. While animating PEN15 may have been a necessity imposed by the pandemic, it feels like Hulu used it as an excuse to cheap out.

That’s a real shame, because the writing and voice acting in “Jacuzzi” remain up to the second season’s high standards. Following Anna, Maya, and Anna’s recently divorced dad, Curtis, as they vacation in a Florida tourist trap, it has plenty of the show’s trademark humor, heartbreak, and deep-cut Y2K nostalgia (remember hair wraps and Aqua’s “Candyman”?). That makes it even harder to watch without thinking of how good a live-action version could have been.

“Jacuzzi” picks up exactly where last fall’s finale left off, with Curtis driving Anna and Maya home from the play’s cast party in his new midlife-crisis convertible. The transition from live-action to animation doubles as a time jump, as the trio set off on a spring-break road trip from the girls’ mystery hometown (PEN15 has never been clear on exactly where it’s set) to what appears to be Daytona Beach (I’m basing this on its boardwalk Ferris wheel — a rarity in Florida, where I grew up).

In keeping with PEN15’s no-bullshit take on the teen years, the vacation is a disappointment from the jump. The motel is shabby, the boardwalk is comically overpriced, and the beach is off-limits thanks to an influx of jellyfish. Still, none of that is enough to dampen the girls’ enthusiasm until they unwittingly fall into the path of an insecure tween’s greatest enemy: a caricature artist. He renders Anna with an exaggerated nose and Maya with a moon face and slight mustache, sending both girls into a tailspin of insecurity about their looks.

This leads to the episode’s sole attempt to play with the possibilities of animation, portraying Anna and Maya as their “ugly” selves for the remainder of its runtime. The idea of making the girls’ insecurities visible is a sound one, but it also feels unresponsive to the story; even when they encounter romantic success (or what passes for it to a 13-year-old), their self-perception doesn’t change. Since the episode is otherwise so visually flat, the transformation quickly fades into the background, with no other surrealist touches to anchor it.

The most compelling section of “Jacuzzi” follows Maya and Anna on a trip to a “nightclub” for tweens, where they hope to reunite with a pair of cute boys they met at the hotel pool. Instead, they fall in with some older teens, who treat them to virgin daiquiris spiked with airplane bottles of booze. The dynamic between the girls and the “cool kids” is perfectly executed, rendering every shade of the older kids’ contempt, amusement, and protectiveness toward Maya and Anna. The contrast between the sad, bland environs of “Indaclub” and the undercurrent of genuine danger is painfully authentic, as Maya cadges liquor from a creepy older guy and Anna goes over the line with chugging drinks to impress the older kids.

As good as these scenes are, I wish the episode had given a little more of its runtime to the B-plot, a burgeoning romance between Curtis and Aline, the hotel’s manager. The second season did outstanding work with Anna’s parents’ divorce, and Curtis’s chagrined admission to Anna that he kissed Aline and it “made [him] feel really bad” is something I would have liked to have seen actually play out onscreen. A divorced parent’s first dalliance with a new romantic partner is a huge deal for a kid, but Anna’s feelings about it don’t get enough exploration here.

“Jacuzzi” does have a happy ending, or what passes for one in the world of PEN15, as Anna and Maya are validated by some mutual interest from their crushes right as they’re about to head home. (Their attempts to out-”baby” and “honey” each other with the boys, whom they barely know, are hysterical.) It’s a little pat, but a nice change of pace from the often grim episode endings of last season. Still, while Curtis concludes the episode by telling Maya and Anna that they’ll “look back on [vacation] someday and really like it,” I can’t say I’ll feel the same about this special. I’m excited for PEN15 to go back to “real life” — and real actors — soon.