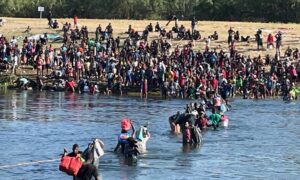 Mark Krikorian, executive director of the Center for Immigration Studies, has studied immigration-related issues for decades.

He sat down with The Epoch Times at the National Conservatism Conference in Orlando, Florida, shortly before delivering his speech at the event, “Mass Immigration vs. Modern Society.”

The following conversation has been edited for length and clarity.

The Epoch Times: I’ve written a few times about the environmental impact of immigration, and particularly illegal immigration. I’ve focused on carbon emissions in their home countries versus the United States. You’d expect this to not be controversial, but this is something it seems to me you can’t discuss without being immediately accused of xenophobia or bigotry. What do you think that’s about—because I get the sense that’s changed over the past few decades.

That was not controversial in the past, when the population issue was mainly a matter of domestic fertility—in other words, when most population growth was driven by Americans having kids, then it was okay to be concerned about population growth on the Left, because that was, in a sense, a way of being anti-American.

The Epoch Times: If you look at the response to countries that have adopted pro-natalist policies, I think that’s a very consistent theme.

Say what you will about the Club of Rome and some other groups, but at least there was more consistency there on immigration—but that seems to have fallen by the wayside.

Mr. Krikorian: I think the reason there was that consistency—it’s not so much because the people making those arguments hated America or hated the West, necessarily—although I think probably a lot of them did—it’s that they weren’t forced to confront the contradictions in their own worldview.

In other words, that non-whites are inherently superior to whites—morally, objectively superior—which is kind of a starting point for much of the Left. [As] an inversion of an older, pro-white racism, this is anti-white racism.

Personally, I’m not a population or environment alarmist, but if you’re worried about carbon emissions, one of the things you have to be worried about is large-scale immigration. How can you not? And yet, people aren’t.

That’s the companion sentiment to giving China a pass as a country for building coal plants and all the rest of it, is because you can’t really criticize China, because they’re a non-Western country.

Even though the economies of the West have become much less harmful to the environment, you still have to focus on that, because focusing on China as the biggest driver of further problems for the environment is somehow racist, just as talking about the Wuhan virus is racist, even though that’s obviously where that came from.

They’re different versions of the kind of pathological self-hatred of the elites in the West. And one of the ways that shows up is this attenuation—really, disappearance—of concern about immigration driving increased carbon emissions.

Mr. Krikorian: It’s the same idea—pathological self-hatred. Christians from the Middle East are still seen as somehow more like us, and therefore bad, even though they’re the ones getting the [expletive] end of the stick in the Middle East.

The Epoch Times: Are there any other clear-cut environmental hazards or threats to ecosystems that are related to mass immigration?

Mr. Krikorian: The big [issue] is the carbon emissions and, generally speaking, water use and all the rest of it. The other is the on-the-ground, immediate impact that illegal flows in a fragile ecosystem like the Southwest have. It devastates the flora. You’ve got smugglers knocking over saguaro cactuses that took two hundred years to grow. You don’t just plant a new saguaro cactus, you know what I mean?

The mass illegal flows of people are much more damaging [to the Southwest] than they would be anywhere else.

The Epoch Times: One thing I often think about is, beyond what’s happening just across our borders, when you have massive numbers of people traveling, often on foot, across thousands of miles, you’d expect that to have an impact.

Mr. Krikorian: Especially where there are bottlenecks.

The Darién jungle of eastern Panama—it’s called the Darién gap, because there’s a gap in the road system. You could drive from Anchorage, Alaska, almost to Tierra del Fuego, expect for the Darién gap, where there’s no roads.

Mr. Krikorian: Completely lawless. And people are pouring through there, laying waste to the environment there. So it’s a similar phenomenon.

The leader of one of the Indian groups, the chief who lives down there, is screaming bloody murder because people are just overrunning their turf. It damages their way of life and ability to earn a living.

The Epoch Times: I’m also wondering about your remarks today: “Mass Immigration vs. Modern Society.” What do you mean by that?

Mr. Krikorian: What I mean by that is that’s sort of my unified field theory for immigration restriction. Everybody comes to immigration from a different angle. Some people are worried about security issues. Other people are worried about workforce or environment or government services or assimilation. My point is they’re all the same thing. They’re all ways that mass immigration is incompatible with the goals and the characteristics of a modern society.

The immigrants aren’t the problem, because the immigrants really aren’t particularly different from anyone a hundred or two hundred or three hundred years ago. What’s different is us. Modern society is different in kind from anything that’s existed in the past. We are running a 19th century immigration policy in a 21st century country, and it doesn’t work.

Immigration is just a federal government program that we can upsize or downsize or change any time we want. It’s just like farm subsidies or small business loans or something else.

The Epoch Times: And yet we spent the last few years discovering that despite what the federal program may be, individual cities can apparently declare themselves sanctuaries and operate independently.

Mr. Krikorian: There is that. They can’t formally amnesty anybody, but by not cooperating with ICE [Immigration and Customs Enforcement], ironically, what they’re really doing is protecting criminals, because the only people that ICE picks up from non-sanctuary cities are people who were arrested for local crimes.

Editor’s note: in its Fiscal Year 2020 report on enforcement and removal operations, ICE reported that 68 percent of its administrative arrests were of convicted criminals, while 22 percent were of people with pending criminal charges and 10 percent were of other immigration violators.

Nathan Worcester is an environmental reporter at The Epoch Times.

More articles from this author