Parkland students like me were told to get over our grief. We didn’t get the support to do it. 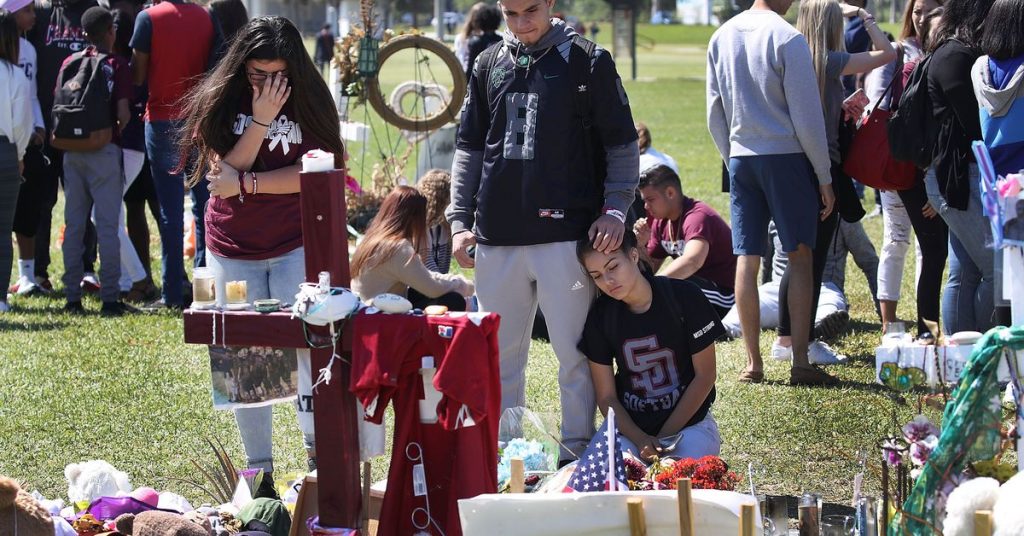 Students from Marjory Stoneman Douglas High School stand together at a memorial in March 2018 in Parkland, Florida. | Joe Raedle/Getty Images

Two Parkland survivors have ended their lives. I’ll never forget the day when 17 of my classmates and teachers were gunned down in one of the deadliest school shootings in our nation’s history. I’ll also never forget the collective anxiety, fear, and grief everyone at Marjory Stoneman Douglas High School felt in the months following the tragedy.
I remember struggling with not sleeping or eating. I remember quitting varsity track and field after six years, giving up my position of captain. I remember struggling with an assigned essay for one class, as the constant thought of my lost friends weighed on my ability to focus. When I confided in my teacher that I was unable to write, she told me to put my grief in a box and complete the paper.

This was not an unusual encounter with Marjory Stoneman Douglas teachers and administrators after the shooting. Two weeks after the shooting occurred, students and teachers were expected to return to the campus and the crime scene. The mental health professionals made available were largely inaccessible and insufficient for the more than 3,000 students and staff navigating their trauma and grief. In the following months, my graduating class walked across the stage without any information or resources now that we were in the real world. There was no plan for us.
This week, two more of my classmates and fellow survivors have been lost to this tragedy, this time by suicide. As the nation mourns, we must ask what we did and what we should be doing to support the mental health of those who survived Parkland and other mass shootings.
The mass shooting generation
My generation is the generation of mass shootings. We all grew up with regular active shooter drills in our classrooms. The unluckiest of us experienced real violence firsthand. Yet a deeper understanding of mental health lacks precedence in the national conversation. When the shock wears off and the news cameras leave, we can’t abandon the survivors. If we do, we risk more tragedies.
After the Parkland shooting, mental health resources to survivors and students at our school were woefully inadequate. When asked for comment, Broward County Schools told Vox that they “focused on the wellness of students, faculty, families and the community,” which included opening five locations for mental health support, bringing more than 25 mental health clinicians to the school along with two additional guidance counselors, and therapy dogs. But these additions weren’t nearly enough for our school population. Therapists were only available on a day-to-day basis, meaning a student seeking counseling multiple times would likely be working with a different person each time. Students were not able to build the trusting relationships necessary to help survivors feel comfortable talking about trauma.

Kyra Parrow
Memorials in from of Marjory Stoneman Douglas High School in February, 2018.

I also felt that understanding and sympathy from administration and staff varied. Many students felt that their traumatic experiences were put on a comparative scale based on where the student was on the day of the shooting. Of course those who experienced the shooting directly were left with incomprehensible trauma. But the grief of all other students also shouldn’t be invalidated. The therapy dogs, painting rocks, and hugs provided were a bandage to deep mental wounds that needed stitches.
Then we were expected to return to our studies like normal. If we struggled with assignments, we were told to put our emotions aside, as if grief were a tangible object that could be locked away and forgotten about. For me and many of my classmates, this belief was accepted. The expectation of sweeping our hardships under the rug would eventually cause a ripple effect of repression. This was the new normal we were forced to become accustomed to.
Suicide prevention and mental health are gun issues
After we graduated, there was little discussion on how to move forward without a support structure. It became easier to bottle up emotions than to deal with them. This dangerous cycle is what eventually leads to undiagnosed and untreated mental health disorders.
The terror and trauma continues. A year later, I still fear sitting in classrooms, and many of my former classmates feel the same way. But on top of that, we fear that the tragedy we experienced will be mirrored in a different community somewhere else in this nation; we are, after all, the generation of mass shootings. We have been fortunate enough to have breathed new life into the conversation of gun violence and elevated it to the forefront of the American consciousness for the past year. The complacency of our Congress justifies our fears even more.

Kyra Parrow
Students at the March For Our Lives in Parkland, Florida in March, 2018.

Mental health and gun laws are connected issues. Nearly two-thirds of all gun deaths in the US are suicides: an average of 59 deaths a day. One of those deaths was my classmate and survivor Sydney Aiello, who died by firearm suicide last week.
We must prevent the next mass shooting or the next suicide. That’s why I support extreme risk protection orders, which are a powerful tool that our state legislatures can pass to help deal with both issues. They allow family members and law enforcement to petition for an order that temporarily relinquishes firearms from those who are exhibiting signs of a behavioral crisis.
If a protection order had been in place, the Parkland shooting could have been averted. Law enforcement went to the shooter’s house more than 40 times, and knew of his longstanding history of violent instances, but had no legal way of making him relinquish his firearms.
Extreme risk protection orders also serve as a tool for suicide intervention: A study by the University of Indiana found a 7.5 percent decrease in firearm suicide in Indiana in the 10 years following the enactment of the law. It is legislation like extreme risk protection orders that can address our nation’s public health epidemic of gun violence, whether it is preventing suicide or averting mass shootings.

We are the generation of mass shootings — but we don’t have to be. Our nation has the opportunity to halt this with key legislation that can not only save lives but put the terror and fear at ease for survivors and help create a road to recovery.
Kyra Parrow is a freshman in college, studying in Orlando, Florida. She has co-founded an organization led by survivors and youth across the nation called Zero USA, which works toward the goal of zero deaths from preventable gun violence.

First Person is Vox’s home for compelling, provocative narrative essays. Do you have a story to share? Read our submission guidelines, and pitch us at firstperson@vox.com.
Read More