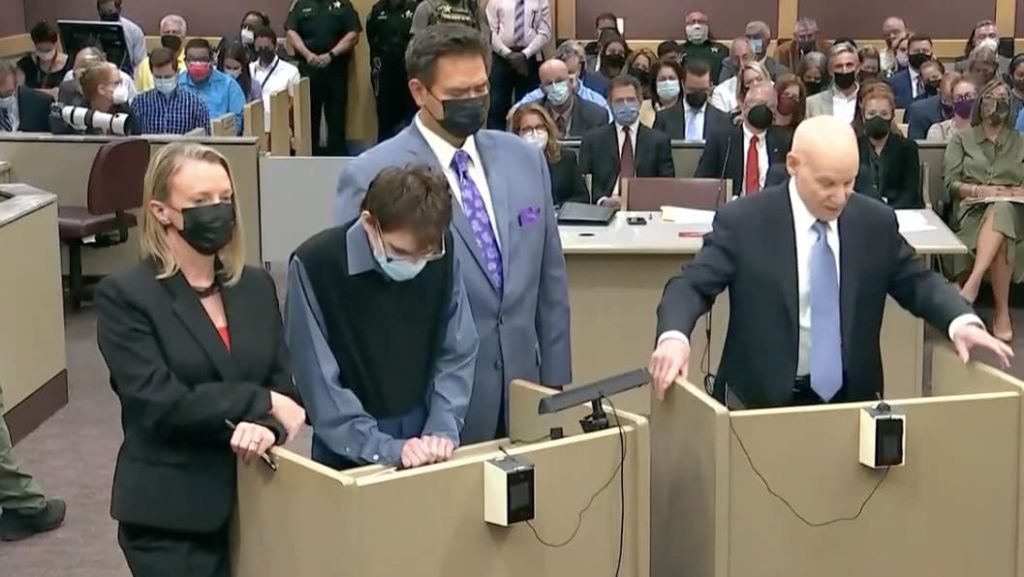 Cruz, 23, appeared before Circuit Judge Elizabeth Scherer, who explained the penalties Cruz is facing. Scherer told him that his guilty pleas precede a penalty phase during which a jury will decide whether Cruz will be sentenced to death or face life in prison. In all, Cruz pleaded guilty to 17 counts of first-degree murder and another 17 counts of attempted first-degree murder.

“Life in prison means life with no parole—there’s no parole in Florida, do you understand?” Scherer said. “Do you understand that in a lot of states, life means…in 25 years, they’ll consider you for release…but [in] Florida we do not have that. Life means you are in there for the term of your life, and you do not come out until you are no longer alive. Do you understand?”

Cruz, in a surgical mask and glasses, nodded and said he understood.

Cruz’s seven-minute killing spree took place on Valentine’s Day 2018, when he took an Uber to the school and gunned down his victims with an AR-15 semiautomatic rifle. Cruz had been expelled from Stoneman a year earlier for threatening behavior.

When Cruz was given a chance to address the court, he said, “I am very sorry for what I did, and I have to live with it every day. And if I were to get a second chance I will do everything in my power to try to help others… I know you don’t believe me, but I have to live with this every day, and it brings me nightmares and I can’t live with myself sometimes.”

He then went on a bizarre tear about society’s ills.

“But I try to push through, because I know that’s what you guys would want me to do. I hate drugs, I believe this country would do better if everyone would stop smoking marijuana and doing all these drugs and causing racism and violence out in the streets…I can’t even watch TV anymore,” Cruz said.

He added he wished for the victims’ families to decide whether or not he lived or died. The judge patiently explained to Cruz that this was a decision to be made by a jury, as prescribed by Florida law.

In an email, Debbi Hixon, whose husband Chris was shot and killed by Cruz during the rampage, told The Daily Beast: “I am appreciative that we have moved through the guilt phase and are going to the sentencing phase in January. This has been too long and we are ready to get through this part of our nightmare.”

Fred Guttenberg, whose 14-year-old daughter Jaime was also killed by Cruz that day, said he wants Cruz to pay with his life for what he did.

“I left the courthouse to go visit my daughter at the cemetery,” Guttenberg told The Daily Beast. “There was no peace, there was no closure. But for my family, this was a really important step for us to finally move forward from this nightmare of a legal process that has been part of our life now for 3 1/2 years. So, that’s reality. As for how I feel about what happened in the courtroom today, it was an important step to what I hope is the ultimate punishment… I don’t have any grace for him. I want the penalty phase to go forward and I want him to get the death sentence.”

Cruz espoused anti-Black, anti-Jewish, and anti-LGBTQ views, and had a particular hatred for “liberals,” according to a 2018 report by the Florida Department of Law Enforcement. In one photo obtained by investigators, Cruz, whose late mother allowed him to buy guns against the advice of mental health professionals, can be seen wearing a red MAGA hat and a bandana around his face. In private Instagram messages, Cruz reportedly boasted of having written a letter to former President Donald Trump.

In November 2018, while locked up and awaiting trial, Cruz attacked a correctional officer keeping watch over him and subsequently pleaded guilty to four counts of battery and other related charges.

According to the arrest report in that case, the officer asked Cruz to stop dragging his sandals on the ground while walking in the dayroom area. Cruz “responded by displaying his middle finger,” before tackling and punching the officer, the report states, adding that Cruz then grabbed the officer’s stun gun and discharged it, then struck the officer “several more times” before finally retreating to a nearby seat and allowing himself to be taken into custody.

For that, Cruz faces an additional 14 months added onto his sentence.