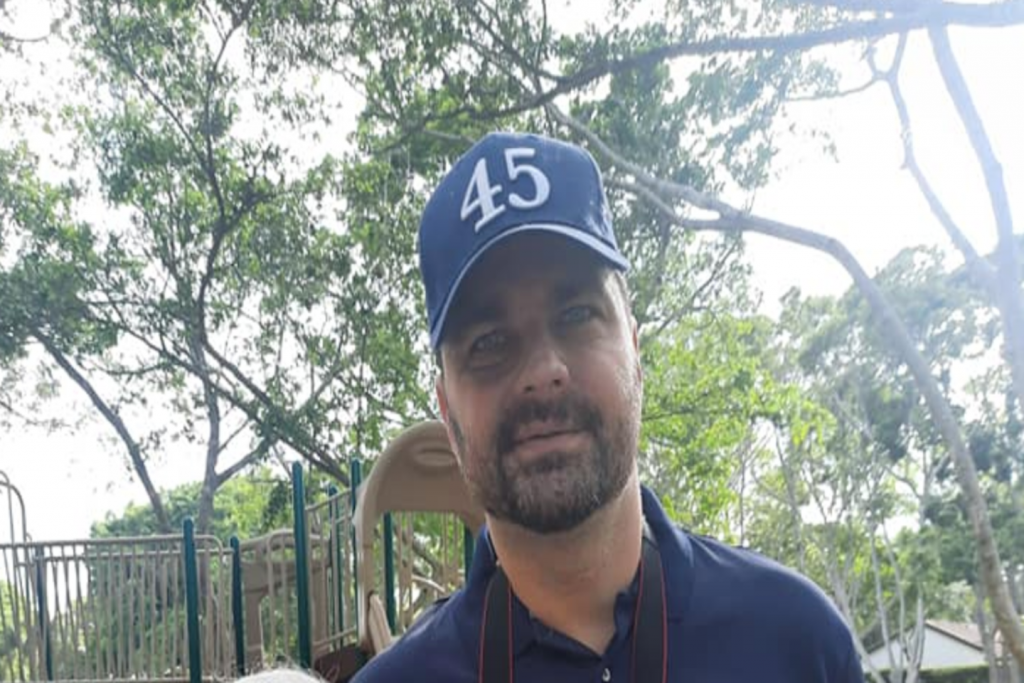 Unraveling viral disinformation and explaining where it came from, the harm it’s causing, and what we should do about it.

Want the best of VICE News straight to your inbox? Sign up here.

One of QAnon’s most prolific, popular, and antisemitic influencers has been revealed to be a deeply religious 39-year-old Trump supporter in Florida.

Researchers at Logically on Friday published an investigation into the identity of GhostEzra, an antisemitic QAnon figure, identifying him as Robert Randall Smart of Boca Raton.

Smart, who is married with one son, appears to have operated a number of online businesses, including as an Amazon reseller, selling everything from dog food to garden equipment.

Pictures of Smart on social media show him surrounded by family and often wearing a “45” baseball hat in support of Donald Trump.

In October 2020, Smart attended Donald Trump Jr.’s Fighters Against Socialism tour “with his Colombian wife and their small son,” and was quoted in the South Florida Sun Sentinel about the dangers of socialism: “It starts small. A little bit here and a little bit there, and it turns into a Venezuela.”

Smart also appears to be deeply religious. His online accounts show him checking into several evangelical Baptist churches in his area, and his family’s social media accounts are filled with religious images and memes.

But the online persona of GhostEzra, which Smart has crafted since it first emerged in December 2020, is deeply disturbing.

The account has made claims about Jewish control of Big Pharma, the media, and central banking. The account has also claimed that Jews are responsible for both world wars and that the people who “identify as Jewish but are not actually even Jews” have a goal of “total world domination and control.” He has linked his followers multiple times to neo-Nazi propaganda, including a 12-hour film that, among other claims, asserts that Jews created communism with a goal of “total world domination.”

And as a result, the comments under the account’s Telegram posts now “effectively function as a neo-Nazi discussion forum,” the Logically researchers wrote. GhostEzra’s Telegram channel currently has over 330,000 followers, while his account on the far-right network Gab has over 113,000 followers.

QAnon is an inherently antisemitic movement, and while the GhostEzra account is currently the most overtly antisemitic QAnon influencer, he is far from the only one. Earlier this year a VICE News investigation unmasked a Denver-based chiropractor as the person behind the antisemitic account IET.

Smart was unmasked by the investigators after he posted several of his own photos through his GhostEzra account. One of the photos showed the Florida Emergency Alerts Systems displayed on a television set.

While the image posted to Telegram showed only the portion of the picture with the screen, by altering the exposure on the image, Logically’s researchers were able to reveal the rest of the image—which included pictures of Smart’s family lined up above the TV.

A picture of Smart posted on his wife’s Facebook page shows him standing in front of the same TV.

The researchers were then able to narrow down GhostEzra’s location after he posted about the rising price of gas. The post was accompanied by a picture showing a close-up picture from a gas station.

“By looking at U.S. national averages and trends for gas prices, we were able to narrow the location of the gas station in the photo down to three possible states,” the researchers wrote. ”GhostEzra’s posting patterns also suggested that they were located in the Eastern U.S. time zone. This information enabled us to identify the exact location of the gas station pictured to be St Andrews Boulevard in Boca Raton, Florida. ”

The major breakthrough in the investigation came however when GhostEzra posted a screenshot of themselves watching a livestream. In the bottom-left corner of the image the researchers saw a livestream chat displaying the phrase: “Chat publicly as Robert S…”

The researchers were then able to identify Google and Yelp review accounts with the same name and the same profile picture. Notably, they found that an account with the name “Robert S” had left a review for his local Jewish Center, giving it a one-star rating and writing “not nice.”

GhostEzra’s emergence as a powerful figure within the QAnon movement coincided with the disappearance of Q, the conspiracy’s anonymous leader. Several high profile figures have attempted to fill the void left by the absence of Q, but only GhostExzra has succeeded in gaining a huge following despite increasingly antisemitic, transphobic, and violent rhethoric.

The account has become so popular that a lawyer for Ezra Cohen, a former Trump official who many believed was Q, felt the need to clarify on Twitter that his client was not running the account.

“GhostEzra has become a leader in the QAnon community at a time when the movement has sorely lacked any kind of organized direction,” Mike Rothschild, author of the book “The Storm is Upon Us: How QAnon Became a Movement, Cult, and Conspiracy Theory of Everything” told VICE News.

At a time when many QAnon influencers are attempting to disavow the QAnon branding and make their conspiracy theories more palatable to a mainstream audience, GhostEzra moved in the opposite direction.

“The account gleefully and consistently posts antisemitism, bizarre conspiracy theories, violent ideation, and transphobic ‘questions’ about what women are really men and what men are really women, most of which more mainstream platforms don’t allow anymore,” Rothschild said. “As Q becomes more watered down and mainstream, GhostEzra stands apart as wedded to its most bizarre aspects, and against monetizing these beliefs.”