On This Day, April 24: Hubble Space Telescope launched into space 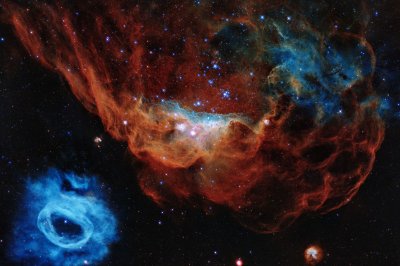 On April 24, 1990, the Hubble Space Telescope was launched into space from the Kennedy Space Center in Florida aboard the space shuttle Discovery. File Photo courtesy of NASA | License Photo

In 1704, the Boston News-Letter became the first U.S. newspaper to be published on a regular basis.

In 1800, the U.S. Congress established the Library of Congress.

In 1913, the Woolworth Building, designed by architect Cass Gilbert, an early proponent of skyscrapers, opened to the public and its tenants.

In 1914, the Easter Rising began. Irish republicans armed themselves in rebellion against the British government. Nearly 500 people died –including more than 250 civilians — during the six-day skirmish, and the British executed 16 rebels.

In 1957, the Suez Canal was reopened to shipping after being shut for more than five months following a conflict between Egypt, and the trio of Israel, Britain and France.

In 1980, Operation Eagle Claw, the attempt to rescue 52 embassy staff held captive in Tehran, ends with the death of eight servicemen when a helicopter crashed into a transport aircraft.

In 1983, German endurance racing driver Rolf Stommelen died during a crash at the Riverside International Raceway in California. He was 39.

In 1986, the duchess of Windsor, Wallis Warfield Simpson, for whom Britain’s King Edward VIII gave up his throne, died in Paris at age 89.

In 1990, the Hubble Space Telescope was launched into space from the Kennedy Space Center in Florida aboard the space shuttle Discovery.

In 1996, the Palestinian National Council voted to drop its official commitment to the destruction of Israel.

In 2005, Benedict XVI was installed in Rome as the 265th Roman Catholic pope.

In 2013, a building that housed clothing factories collapsed in Bangladesh, killing more than 1,000 people.

In 2020, the U.S. Food and Drug Administration issued a warning about serious and potentially life-threatening side effects of chloroquine and its sister drug, hydroxychloroquine, including heart rhythm problems that have been seen in clinical trials. The malaria drugs had been used in clinical trials for treatment of COVID-19.