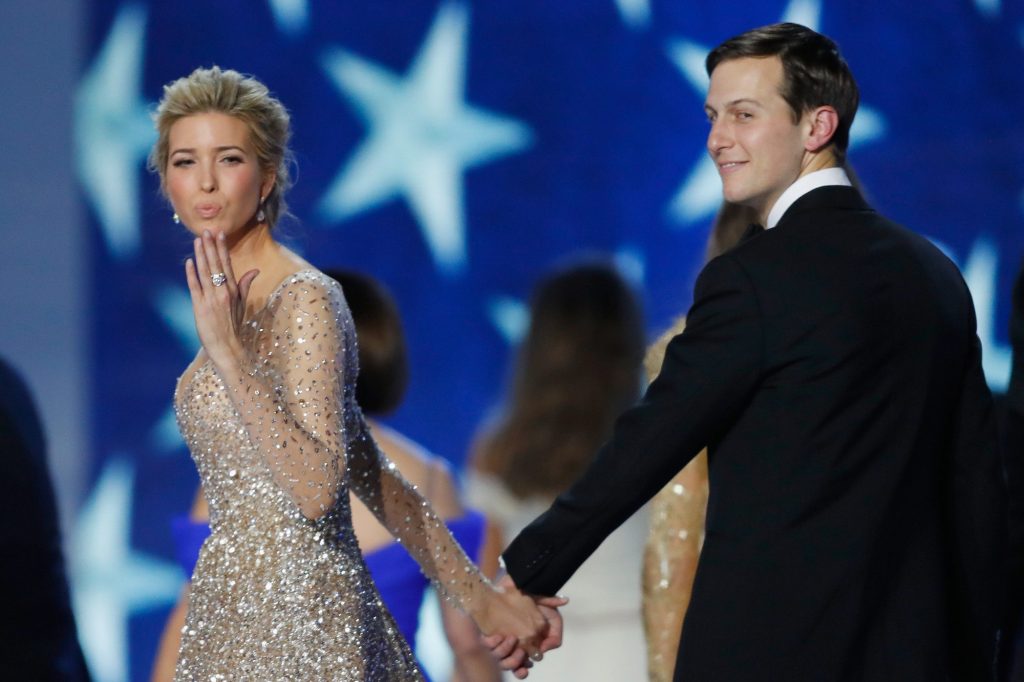 One of the most irksome features of the Trump administration, besides the racism and the mass casualties from COVID-19 and the insurrection was the elevation of Donald Trump’s daughter and son-in-law to senior positions in the White House, despite them literally having no business being there. Entirely lacking in any self-awareness whatsoever, Ivanka Trump and Jared Kushner clearly didn’t see things that way, and thus thought it totally reasonable for them to advise the leader of the free world without having any relevant experience between them. (No, the Ivanka Trump Fine Jewelry line doesn‘t count.) That’s how Kushner horrifyingly became one of the key players in the government’s coronavirus response, and how Ivanka was able to sit alongside so many world leaders as though they were equals that this fine outlet was able to get a whole slideshow out of it.

While the former first daughter reportedly, and disturbingly, believes she could be the first female president, it’s quite clear that this duo views themselves not as former aides to the president of the United States with designs on higher office, but as something significantly more regal than that, having spent years cosplaying Prince and Princess of the Contiguous United States. Except, obviously, they’re not, as an anecdote from a new book by Stephanie Grisham, former White House press secretary and former chief of staff to the first lady, neatly demonstrates. Per The Washington Post:

[Grisham] is particularly negative about the president’s daughter, Ivanka Trump, and her husband, Jared Kushner—both of whom held senior White House positions. She wrote that the first lady and White House staff called Ivanka “the Princess” who regularly invoked “my father” in work meetings, and Grisham dubbed Kushner “the Slim Reaper” for his habit of inserting himself into other people’s projects, making a mess and leaving them to take the blame.

Tellingly, Grisham writes that Ivanka and Jared tried to push their way into meeting Queen Elizabeth II alongside the president and first lady, a wild breach of protocol on a state visit, but were thwarted when they couldn’t fit into the helicopter. “I finally figured out what was going on,” Grisham writes. “Jared and Ivanka thought they were the royal family of the United States.”

After four years of watching the poster children for nepotism actively damage the country with their own incompetence, it’s nice to hear they were on the receiving end of a diplomatic “you’re not on the list.” In fact, it’s almost as gratifying as world leaders visibly asking themselves, “Who is this and how did she get in here?“

Yes, this is happening, and you’ll never guess the political party responsible:

An Oregon school board on Tuesday voted to ban educators from displaying Pride flags, Black Lives Matter symbols or other emblems in the classroom that are considered “political, quasi-political or controversial,” despite pushback from teachers, lawmakers and residents. The conservative majority on the school board in Newberg voted 4 to 3 to adopt a policy that has attracted national attention, criticism and protests in the weeks since it was introduced. The decision in suburban Portland follows a pair of recent racist incidents at Newberg Public Schools. In one of them, a staff member showed up for work in blackface in an apparent protest of the district’s coronavirus vaccine mandate for employees and was subsequently fired.

Brian Shannon, the Newberg School Board’s vice chairman, introduced the measure over the summer. He said in the Tuesday evening meeting that the policy championed and adopted by him and his conservative colleagues is “very straightforward” and “shouldn’t be controversial.” “We don’t pay our teachers to push their political views on our students. That’s not their place,” Shannon said. “Their place is to teach the approved curriculum, and that’s all this policy does, is ensure that’s happening in our schools.”

The new policy was denounced by the school board’s three liberal members who apparently controversially believe there’s nothing wrong with espousing equal rights for LGBTQIA+ individuals, and people of color. “I think the point of this is to show that you are trying to sow division with extremist views and you have no interest in listening to the community,” school board member Brandy Penner said in the Tuesday meeting.

YouTube is taking down several video channels associated with high-profile anti-vaccine activists including Joseph Mercola and Robert F. Kennedy Jr., who experts say are partially responsible for helping seed the skepticism that’s contributed to slowing vaccination rates across the country.

As part of a new set of policies aimed at cutting down on anti-vaccine content on the Google-owned site, YouTube will ban any videos that claim that commonly used vaccines approved by health authorities are ineffective or dangerous. The company previously blocked videos that made those claims about coronavirus vaccines, but not ones for other vaccines like those for measles or chickenpox.

Misinformation researchers have for years said the popularity of anti-vaccine content on YouTube was contributing to growing skepticism of lifesaving vaccines in the United States and around the world. Vaccination rates have slowed and about 56 percent of the U.S. population has had two shots, compared with 71 percent in Canada and 67 percent in the United Kingdom. In July, President Biden said social media companies were partially responsible for spreading misinformation about the vaccines, and need to do more to address the issue.

“You create this breeding ground and when you deplatform it doesn’t go away, they just migrate,” Hany Farid, a misinformation researcher at the University of California at Berkeley told the Post. “This is not one that should have been complicated. We had 18 months to think about these issues, we knew the vaccine was coming, why was this not the policy from the very beginning?”

Surprise: The Chairman of the Joint Chief of Staff isn’t taking orders from a Trump lackey whose nickname is “Candyman”

As Trump hints at 2024 comeback, democracy advocates fear a ‘worst-case scenario’ for the country (Washington Post)

Is It Ever OK to Get Stoned With a Client? And Other Questions as Pot Comes to Work (WSJ)