Observations from Week 12 in college football: It was a great weekend for Cincinnati 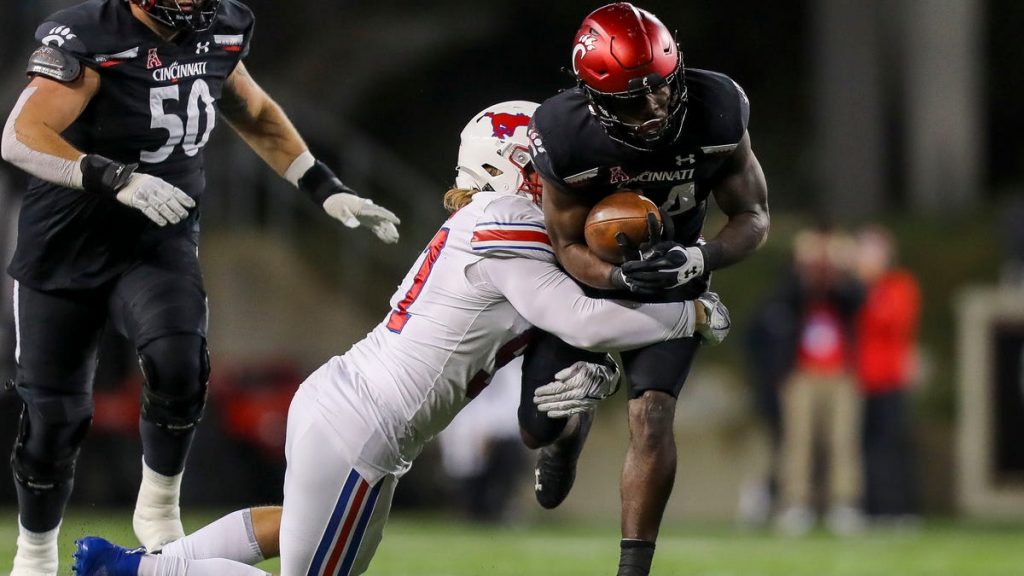 After a couple of close victories against overmatched opponents raised concerns about whether the Bearcats were College Football Playoff-worthy, they dominated SMU in an emphatic victory that should change some opinions on the committee.

The Mustangs were expected to be a dangerous opponent. They were averaging almost 500 yards and 42 points per game — ranking them sixth in the country in both categories. Cincinnati made them look like a high school team for much of the night. When SMU took over the ball early in the fourth quarter, it trailed 48-0 and was being outgained 512-104.

The Bearcats are now confirmed to face Houston in the American Athletic championship game in what should be another opportunity to pad their profile with the Cougars ranked in the committee’s Top 25 last week.

HIGHS AND LOWS: Winners and losers from Week 12

The weekend got even better with Oregon’s loss to Utah which should put the Bearcats in control of their playoff destiny. Ranked No. 5 last week, they should rise into the top four, though there is a possibility Michigan could pass them. Even if that were to happen, the Wolverines will play Ohio State next week, and Georgia and Alabama — the No. 1 and No. 2 teams — are set to play in the SEC title game.

You can definitely say anything about this season. Cincinnati still could be passed by the Big 12 champion, however you have to like its chances of becoming the first Group of Five team in the semifinals with two more wins.

The end-of-season rivalry between the Gators and Seminoles will be renewed next Saturday after last year’s hiatus and the programs couldn’t be going in more opposite directions.

Dan Mullen’s time at Florida appears to be winding down with his team in a dramatic freefall less than 12 months after almost beating Alabama in the SEC title game. An overtime defeat at Missouri dropped the Gators to 5-6 and was their fourth consecutive conference loss.

Florida State is also 5-6 after beating Boston College for its fifth win in seven games. It’s been a remarkable turnaround in Mike Norvell’s second season after an 0-4 start that included a loss to Jacksonville State.

So these teams that have played some of biggest games of the 90s are reduced to playing a bowl-elimination game with the loser missing out on the postseason. It seems unreal but a lot of things seem that way in this unlikely season.

UCLA slowly has gotten back to relevance

Not all rebuilds operate like a microwave and not all progressions are linear. So while there were rumblings about Chip Kelly’s future midway through his fourth season, the Bruins are actually in a pretty good place after their demolishing of rival Southern California. A win next week against California would give UCLA eight wins, which is one fewer than the two seasons combined before Kelly arrived.

It was always going to take time for the former Oregon coach to bring in the unique talent required to run his offense. The first two years were disappointing because the progress wasn’t as tangible as expected. The team was also among the youngest in the country and has finally matured. The Bruins were close last year with a 3-4 record that had four losses by a combined 15 points.

Some of those losses have turned to wins this year. And the record could have been better. Star quarterback Dorian Thompson-Robinson was hurt in a three-point loss to Oregon and missed the following week against Utah. UCLA has scored 106 points in the two games since his return. The challenge now is to build on the success next year to get back to the top of the Pac-12.

Penn State may have found its quarterback of future

It’s always important to temper expectations around the first big debut performance of a quarterback, especially against a weak opponent. Graham Mertz looked like a future star for Wisconsin after a near-perfect game against Illinois before struggling last year. Caleb Williams of Oklahoma has looked ordinary the past two weeks, making his stirring comeback defeat of Texas seem like a long time ago.

However, if you are a Penn State fan you have to be comforted by the play of Christian Veilleux, who threw for three touchdowns in a defeat of Rutgers. Three-year starter Sean Clifford will be moving on after the season and the Nittany Lions faced uncertainty at the position next year. So when Clifford was forced out of the game Saturday, it was an early glimpse at what next season might look like. Veilleux, a true freshman, was 15-for-24 for 235 yards and showed good mobility and comfort after some early struggles in his first game.

Those are all important qualities as Penn State looks to improve its offense next season. The Nittany Lions had a defense good enough to win the Big Ten. Their lack of offense is what cost them close losses to Iowa, Ohio State, Illinois and Michigan. With Veilleux possibly giving a boost to their passing game in 2022, it’s possible the offense can carry its weight and get the team over the hump.