Nicholas Crawls Into Louisiana From Texas, Dumping Rain In Areas Struck By Ida 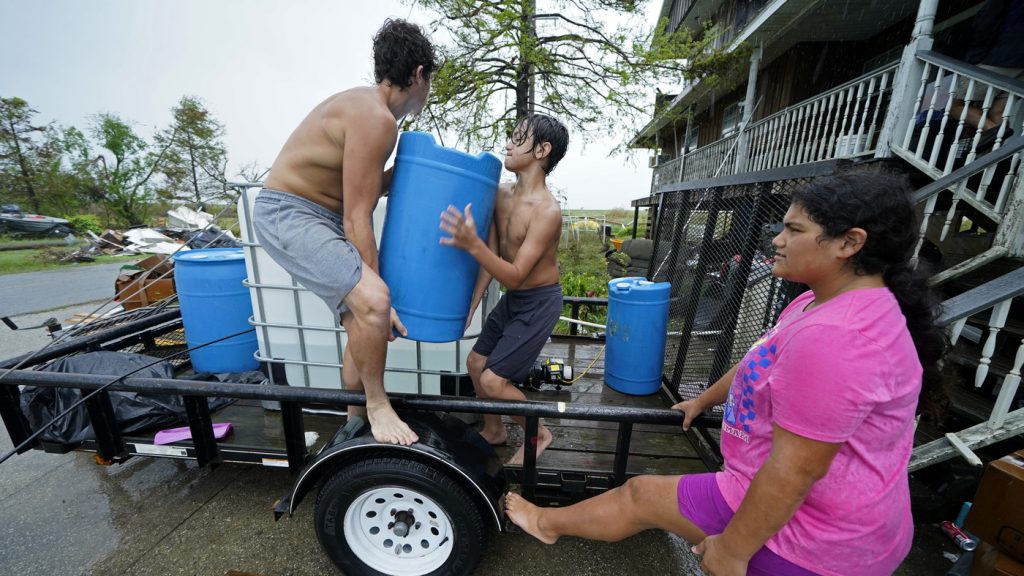 Teenagers move barrels of rainwater they collected from Tropical Storm Nicholas, in the aftermath of Hurricane Ida in Pointe-aux-Chenes, La., on Tuesday. They have had no running water since the hurricane, and collected 140 gallons of rainwater in two hours from the tropical storm, which they filter and pump into their house for showers.

Teenagers move barrels of rainwater they collected from Tropical Storm Nicholas, in the aftermath of Hurricane Ida in Pointe-aux-Chenes, La., on Tuesday. They have had no running water since the hurricane, and collected 140 gallons of rainwater in two hours from the tropical storm, which they filter and pump into their house for showers.

POINTE-AUX-CHENES, La. (AP) — Nicholas weakened to a tropical depression as it crawled from Texas into southern Louisiana on Wednesday, unleashing heavy rain across a landscape where Hurricane Ida destroyed thousands of rooftops now covered with flimsy tarps.

Forecasters said Nicholas would slow to a stall over central Louisiana through Thursday, with plenty of water still to dump east of its center, drenching the Gulf Coast as far as the western Florida Panhandle. Southeast Louisiana faced the biggest flooding threat, and Gov. John Bel Edwards warned people to take it seriously, even though Nicholas was no longer the hurricane that made landfall in Texas on Tuesday.

“This is a very serious storm, particularly in those areas that were so heavily impacted by Hurricane Ida,” Edwards said.

Forecasters warned people along the central Gulf Coast that up to 20 inches (50 centimeters) are possible through Friday in places across a region still recovering from Category 4 hurricanes — Ida weeks ago and Laura last year.

Galveston, Texas, recorded nearly 14 inches (35 centimeters) of rain from Nicholas, the 14th named storm of the 2021 Atlantic hurricane season, while Houston reported more than 6 inches (15 centimeters). The New Orleans office of the National Weather Service said late Tuesday that as much as 10 inches (25 centimeters) of rain could fall in parts of Louisiana, with some areas seeing particularly intense periods of 2 to 3 inches (5 to 8 centimeters) of rainfall per hour.

In the small Louisiana community of Pointe-aux-Chenes, Ida peeled open the tin roof of Terry and Patti Dardar’s home, leaving them without power and water for more than two weeks since. Nicholas made the damage that much worse, soaking the upstairs. But it also provided them with badly needed water, which their son Terren and grandchildren collected in jugs and poured into a huge plastic container through a strainer. From there, a pump powered by a generator brought the water inside.

His mom, Patti, said the family didn’t have anywhere else to go after Ida, so members were doing their best during Nicholas.

Men cover a roof with tarps in Louisiana on Monday, a week after Hurricane Ida swept through the area.

Men cover a roof with tarps in Louisiana on Monday, a week after Hurricane Ida swept through the area.

Gov. Edwards noted that 95,000 electric customers were still without power more than two weeks after Ida hit. And he said the new storm could mean some who had regained power might lose it again. Homes already badly damaged by Ida were not yet repaired to the extent that they could withstand heavy rain, Edwards added.

Energy companies working to restore power to remaining areas in the state said Wednesday that they were watching Nicholas closely but didn’t expect it to affect their restoration times.

A spokesman for Entergy Louisiana said Nicholas so far has not caused any delays to previously announced times to restore power. Crews cannot operate when lightning is within 10 miles (16 kilometers) and can’t put bucket trucks in the air at winds greater than 30 mph (50 kph), said Jerry Nappi. But once conditions improve they would quickly resume work.

“These are tough guys, and they relish all of this,” he said. The coop services about 21,000 customers across five parishes including parts of the hard-hit Terrebonne and Lafourche parishes. Ticheli said the coop has returned power to about 75% of its customers with the remaining 25% mostly in the hardest-hit parts of southern Terrebonne parish.

In the weather-battered city of Lake Charles, in southwestern Louisiana, Mayor Nic Hunter said ahead of Nicholas the city prepositioned assets should they be needed, and city crews scoured the drainage system to keep it free from debris that might cause clogs and flooding.

Lake Charles has been hammered. Hurricane Laura caused substantial structural damage across the city of nearly 80,000 residents. Weeks later Hurricane Delta ripped through the same area. Freezing temperatures in January burst pipes across the city, and then a May rainstorm swamped houses and businesses yet again.

The mayor says he’s naturally worried about how his people are coping.

“With what people have gone through over the last 16 months here in Lake Charles, they are very, understandably, despondent, emotional. Any time we have even a hint of a weather event approaching, people get scared,” he said.