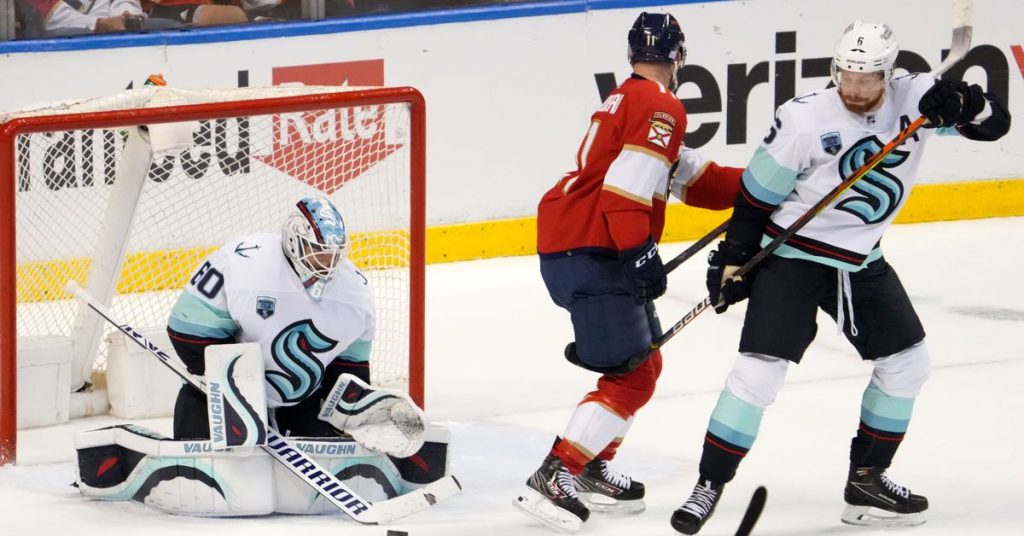 Jordan Eberle scored twice, and Ryan Donato and Jamie Oleksiak (empty-netter) added one goal each as Seattle ended Florida’s season-opening 11-game win streak, which matches the NHL record set by the 1963-64 Chicago Blackhawks for the longest home winning streak to open a season.

Driedger went 21-8-4 with the Panthers the previous two seasons, but this was just his third start and his first win with the expansion Kraken.

Patric Hornqvist scored for the Panthers, who lost a home regular-season game for the first time since April 22 against the Carolina Hurricanes — a span of 15 consecutive contests without a loss.

Cale Makar had three assists to extend his point streak to six games, Gabriel Landeskog, Nazem Kadri and Devon Toews had two assists each, and Jonas Johansson stopped 26 shots for Colorado, which has won seven of its last eight.

Matt Duchene and Luke Kunin had goals, and David Rittich had 29 saves for the Predators.

Mikko Koskinen tied his season-high with 36 saves to lead Edmonton to a win in Las Vegas on a night the two leading scorers in the NHL were kept off the scoresheet.

Ryan Nugent-Hopkins, Zach Hyman and Jesse Puljujarvi scored goals for Edmonton, which won despite Leon Draisaitl (40 points) and Connor McDavid (36) both going without a point in the same game for the first time this season.

Koskinen improved to 11-2-0 with the victory. Chandler Stephenson scored a goal for the third consecutive game and Reilly Smith also scored for Vegas. Robin Lehner finished with 27 saves.

Lucas Raymond scored 26 seconds into overtime as Detroit beat visiting Buffalo in the extra period for the second time in as many meetings this season.

Raymond skated into the Sabres’ zone and fired a wrist shot from the top of the left face-off circle that beat Buffalo goalie Dustin Tokarski between the legs.

The Red Wings also won their second straight overall and improved to 7-2-2 at home. Buffalo lost for the fifth time in its last six games and is now 2-5-2 on the road.

Jordan Kyrou and Justin Faulk also scored for the Blues, who won for just the third time in their last 10 games. Vladimir Tarasenko earned three assists, Robert Thomas had two helpers and goaltender Ville Husso made 24 saves for St. Louis.

Adam Boqvist had two goals and an assist for the Blue Jackets, who lost for just the second time in their last seven games. Boone Jenner also scored for Columbus and Joonas Korpisalo made 27 saves.

Josh Anderson scored twice, and Jonathan Drouin, Christian Dvorak, Artturi Lehkonen and Tyler Toffoli also scored for the Canadiens, who had been 1-5-1 in their previous seven games and picked up their second win in 12 road games.

Sidney Crosby had a goal and two assists, and Evan Rodrigues and Jeff Carter also scored for the Penguins. Pittsburgh goaltender Casey DeSmith, making just his fourth start and first since Nov. 13, made 28 saves.

Viktor Arvidsson and Arthur Kaliyev also scored, Anze Kopitar had three assists, and Cal Petersen made 30 saves for the Kings, who had lost four in a row to start a seven-game homestand.

Michael Del Zotto and Connor Brown scored, and Filip Gustavsson made 33 saves for the Senators, who have lost five in a row and are 1-10-1 in their past 12 games.

Jason Robertson tallied the game-winning goal and added an assist as Dallas claimed its fourth straight win by edging host Arizona in Glendale.

Robertson broke a 2-2 tie midway through the second as the Stars won for the sixth time in their past seven games.

Roope Hintz netted his team-leading seventh goal, and Jacob Peterson tallied once. Joe Pavelski dished out two assists for the Stars, who are 7-3-1 in November.

Kyle Connor scored twice, including the late game-winning goal, to lead visiting Winnipeg to a victory over Calgary.

Paul Stastny and Andrew Copp also scored, and Blake Wheeler collected two assists for the Jets, who snapped a five-game losing skid. Goaltender Connor Hellebuyck turned in a stellar 34-save performance, 16 of them in the third period, en route to erasing a two-goal deficit.

The Flames had all of the third-period momentum until Connor broke the tie with 4:51 remaining in regulation. Off an odd-man rush, he one-timed a top-corner, short-side shot for his 14th goal of the season. Copp added an empty net goal, which snapped a 13-game drought, to round out the scoring.