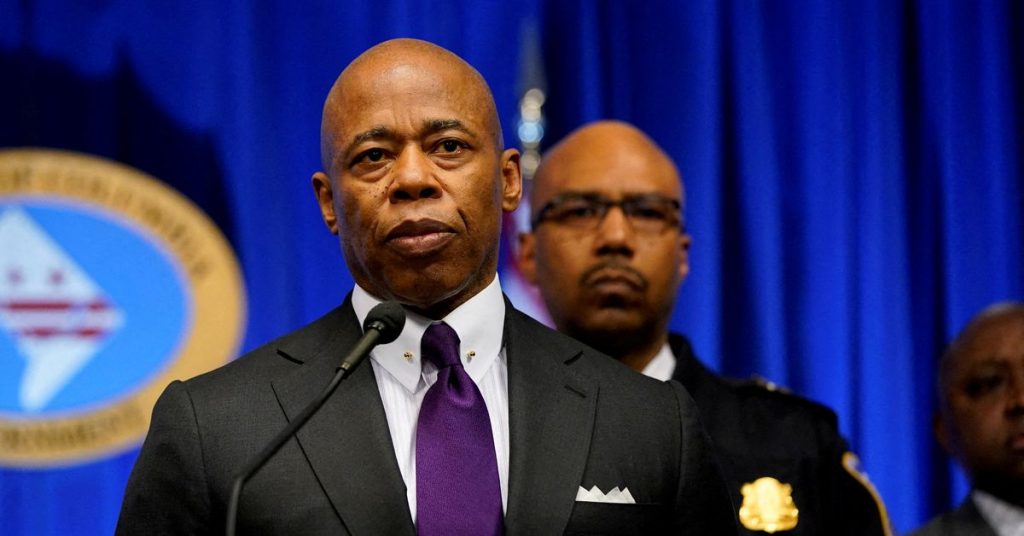 New York City Mayor Eric Adams speaks during a news conference about recent shootings of homeless people in both New York and Washington, at the John A. Wilson Building in Washington, U.S., March 14, 2022. REUTERS/Elizabeth Frantz/File Photo

Signed by Florida Governor Ron DeSantis on March 28, the Republican-backed law takes effect in July and prohibits classroom discussion on sexual orientation or gender identity for children in kindergarten through third grade, or from about ages 5-9, in public schools.

“Come to a city where you can say and be whoever you want,” Adams said in a statement.

“Today, we say to the families living in fear of this state-sponsored discrimination that you will always have a home in New York City.”

Adams made the announcement at New York’s City Hall while standing beside an example of one of the billboards, which he said have been donated and will not cost taxpayers.

“People say a lot of ridiculous things in New York. ‘Don’t say gay’ isn’t one of them,” reads a black and white billboard with “Don’t say gay” in the rainbow colors of the LGBTQ Pride Flag.

DeSantis press secretary Christina Pushaw said on Twitter that the law was “defending parental rights” and if those opposed leave for New York City, which she called “a crime-ridden dystopia,” that would only benefit Florida.

DeSantis and other Republican politicians across the United States say they want to give parents more control over what young children learn in school.

Florida parents filed a lawsuit to block the measure, saying it will have the effect of discriminating against lesbian, gay, bisexual, transgender and queer (LGBTQ) students.

They claim it not only violates students’ First Amendment right to receive information and ideas, but also is unconstitutionally vague and fails to define what discussion is and is not allowed in schools.