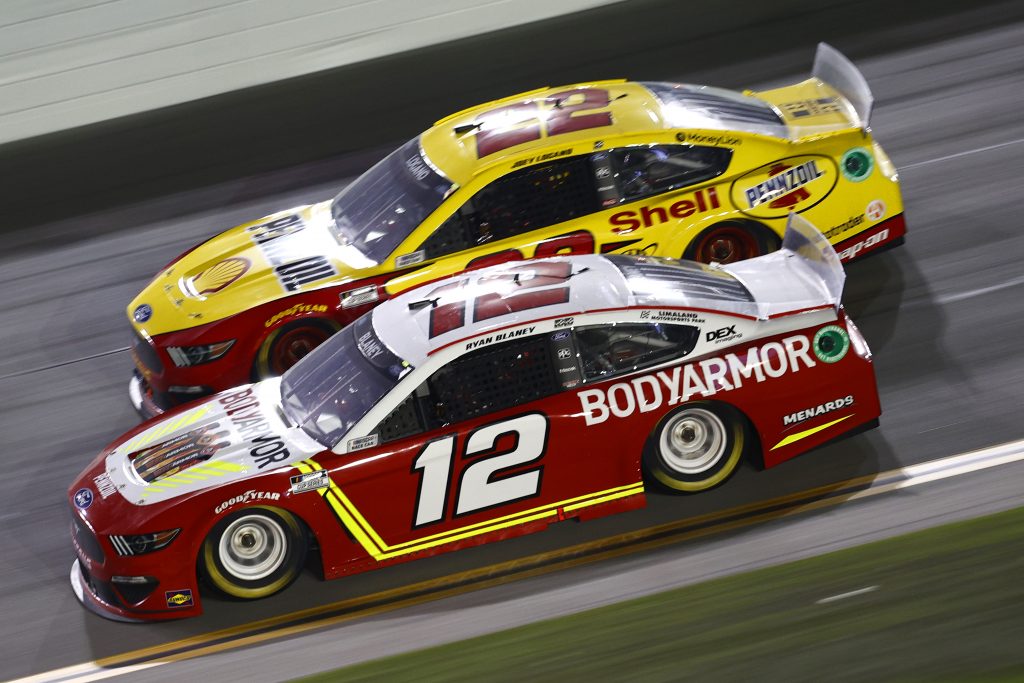 A caution-filled race went into overtime, and Blaney simply survived down the stretch as a horde of drivers crashed behind him with one lap remaining. The final caution ended the race, giving the 27-year-old the victory.

Take a look at the incident that brought out the caution on the final lap of the #CokeZeroSugar400. pic.twitter.com/zA7a6LVpKm

He also moved to a tie for second with Martin Truex Jr. in the playoff standings with the win. Kyle Larson is still in first, and Tyler Reddick grabbed the 16th and final available playoff spot after Saturday’s race.

Here’s a look at how it all went down from Daytona.

No room for error.

Three-wide racing throughout the pack 😳.

Another hairy moment occurred when Ross Chastain brushed against the fence, but he remained unscathed.

Daytona 500 winner Michael McDowell was not as lucky, as his motor blew up, ending his night early:

No repeat at @Daytona for @Mc_Driver.

Michael McDowell’s motor blows up. We’ll see the Daytona 500 winner next weekend at @TooToughToTame as he gets ready for the playoffs. pic.twitter.com/sz3JIduTLj

Ultimately, this stage belonged to Chase Elliott, who surged ahead of the field and also got rid of some trash along the way.

A little aerodynamics in action as Chase Elliott gets some trash removed from his grille. #CokeZeroSugar400 x #NASCAR x @Daytona pic.twitter.com/JGuyMyFqYv

Ol Clyde looked like he got launched out of a canon!@chaseelliott | @DAYTONA pic.twitter.com/L2D6gfug64

Credit to Kyle Busch for the incredible save, though.

No, the car nearly pointing in the wrong direction did NOT crash. pic.twitter.com/f6w0rYn0Zg

The victory marked Elliott’s third stage win of the 2021 season.

The back of the pack saw a crash as Aric Almirola and Alex Bowman both went spinning.

Aric Almirola and Alex Bowman go for a ride at @Daytona. #CokeZeroSugar400 #NASCAR

There wasn’t too much action for the rest of the stage, which Joey Logano ended up winning:

That’s how you know the end of Stage 2 is near. pic.twitter.com/VdQYoiEcw9

A very eventful third stage took place. Of note, Logano, Elliott and Kevin Harvick each took the lead in the span of a single lap.

Three RWR cars involved in this one. Less than 20 laps remain in the final race of the regular season on NBC!

Bubba Wallace, who would have made the playoffs with a win, took the lead at one point:

A push makes the No. 23 light, but @BubbaWallace hangs on and takes the lead at @DAYTONA! pic.twitter.com/pAujqDtPmZ

However, all hell broke loose with a late crash that brought out a red flag. Truex Jr., William Byron and Tyler Reddick were notably involved.

Huge implications for the #NASCARPlayoffs with less than 15 laps remaining!

Jeff Gluck of The Athletic gave some insight.

Replay shows Truex had to check up and got turned and then clobberd byron. Reddick then got into him. Bowman got a piece of it too.

Reddick possessed the 16th and final playoff spot entering the night, and he held onto that as he was able to meet the minimum speed and get back on the track.

The aforementioned crash happened with under 13 laps left. Eventually, red turned to yellow and then green, leading to a frenetic finish.

Logano then slammed into the wall but somehow was able to avoid the other cars and make it to pit road:

And then, all hell broke loose once again.

A huge wreck at the front of the field with only three laps remaining changes everything! pic.twitter.com/ObFtG6xYju

Take another look at the wreck that changed the complexion of the #CokeZeroSugar400. pic.twitter.com/103eiIaNRn

IT’S THE BIG ONE!

Gluck gave more context into how this one went down and who was involved.

Looks like Elliott made one extra move too late and it cost him. Triggered a big wreck. Custer, Bell, Hamlin, KyBusch, DiBenedetto, Keselowski, Bell, Preece, Bowman, even more.

💭 “He double moved. On him. Good job,” @mattdracing is told re: @chaseelliott‘s blocking of him.

When all was said and done, the field went into overtime. Kelly Crandall of RACER provided the lineup, which featured a whole host of drivers looking for a win to clinch that 16th playoff spot.

In the end, Blaney outlasted the field following the crash and earned back-to-back wins.