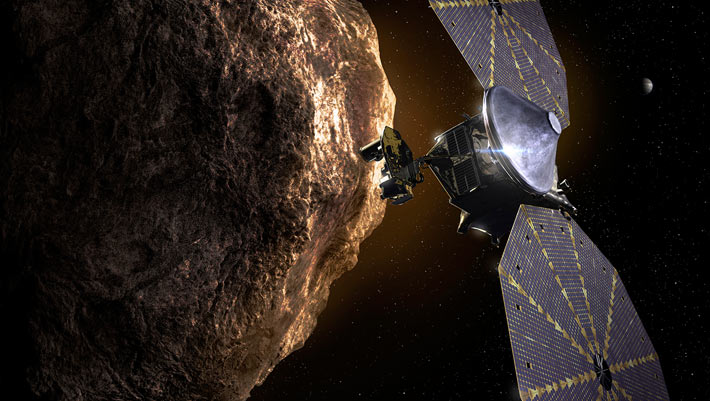 NASA’s Lucy spacecraft was launched on October 16, 2021, at 5:34 a.m. EDT aboard a United Launch Alliance (ULA) Atlas V rocket out of Space Launch Complex 41, Cape Canaveral Space Force Station, Florida. About an hour after launch, Lucy separated from the second stage of the rocket. Its two massive solar arrays, each nearly 7.3 m (24 feet) wide, successfully unfurled about 30 min later and began charging the spacecraft’s batteries to power its subsystems. Lucy sent its first signal to Earth from its own antenna to NASA’s Deep Space Network at 6:40 a.m. EDT. The spacecraft is now traveling at roughly 108,000 kph (67,000 mph) on a trajectory that will orbit the Sun and bring it back toward Earth in October 2022 for a gravity assist.

The swarms of the Trojan asteroids associated with Jupiter are thought to be remnants of the primordial material that formed the giant planets.

Jupiter Trojans orbit the Sun in two loose groups, with one group leading ahead of Jupiter in its path, the other trailing behind.

Clustered around the two Lagrange points equidistant from the Sun and Jupiter, they are stabilized by the Sun and its largest planet in a gravitational balancing act.

NASA’s Lucy spacecraft will be the first space mission to study the Trojans asteroids.

The mission takes its name from the fossilized human ancestor — called ‘Lucy’ by her discoverers — whose skeleton provided unique insight into humanity’s evolution.

Likewise, Lucy will revolutionize our knowledge of planetary origins and the formation of the Solar System.

Lucy’s first Earth gravity assist in 2022 will accelerate and direct its trajectory beyond the orbit of Mars.

The spacecraft will then swing back toward Earth for another gravity assist in 2024, which will propel Lucy toward the Donaldjohanson asteroid — located within the main asteroid belt — in 2025.

Lucy will then journey toward its first Trojan asteroid encounter in the swarm ahead of Jupiter for a 2027 arrival.

After completing its first four targeted flybys, the spacecraft will travel back to Earth for a third gravity boost in 2031, which will catapult it to the trailing swarm of Trojans for a 2033 encounter.

“Lucy embodies NASA’s enduring quest to push out into the cosmos for the sake of exploration and science, to better understand the universe and our place within it. I can’t wait to see what mysteries the mission uncovers!” said NASA Administrator Bill Nelson.

“Today’s launch marks a genuine full-circle moment for me as Lucy was the first mission I approved in 2017, just a few months after joining NASA,” added Dr. Thomas Zurbuchen, associate administrator for the Science Mission Directorate at NASA’s Headquarters.

“A true mission of discovery, Lucy is rich with opportunity to learn more about these mysterious Trojan asteroids and better understand the formation and evolution of the early Solar System.”

“We started working on the Lucy mission concept early in 2014, so this launch has been long in the making,” said Lucy principal investigator Dr. Hal Levison, a researcher at Southwest Research Institute.

“It will still be several years before we get to the first Trojan asteroid, but these objects are worth the wait and all the effort because of their immense scientific value. They are like diamonds in the sky.”

This article is based on text provided by the National Aeronautics and Space Administration.