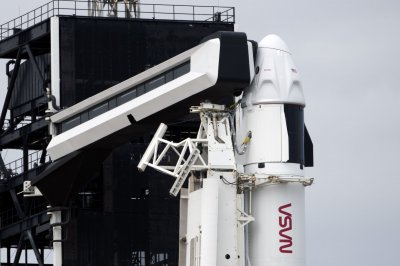 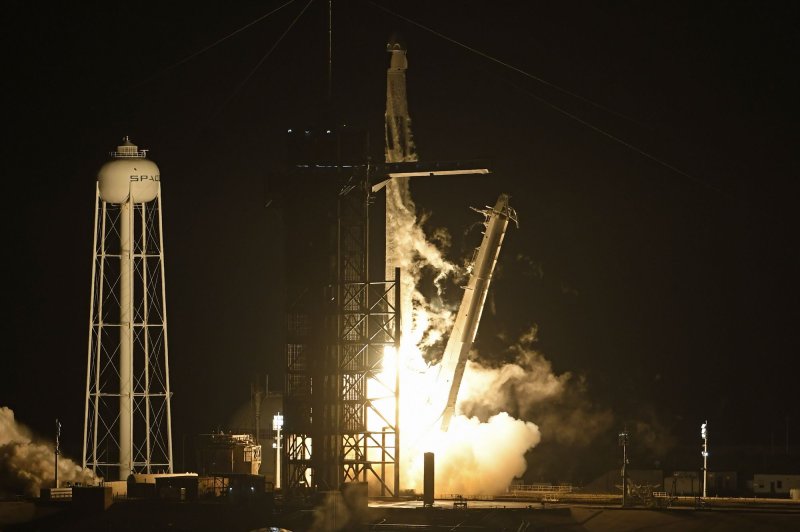 A SpaceX Falcon 9 rocket launches members of the Crew-3 mission to the International Space Station at 9:03 p.m. Wednesday from Kennedy Space Center in Florida. Photo by Joe Marino/UPI | License Photo

The SpaceX Falcon 9 rocket and Crew Dragon capsule rose into the cloudy night sky as planned at 9:03 p.m. EST from Complex 39A at Kennedy Space Center. Clouds glowed bright in a large area of the sky above the pad, lit by the rocket’s fiery exhaust plume.

Light rain that had fallen earlier Wednesday cleared the coastal area about two hours before launch, after the crew rode in white Tesla sedans to the pad.

The launch originally had been planned for Oct. 31, was bumped up a day earlier and then moved back at least three times.

“Sometimes you try to fly on Halloween, but you get the trick instead of the treat,” mission commander Raja Chari joked in final comments to mission control before liftoff. He added that the crew was honored to be scheduled for flying through space on Veterans Day, which is Thursday.

As the capsule entered orbit about 14 minutes after launch, crew members waved to the onboard camera and Chari said, “It was a great ride, better than we imagined.”

The crew looked “really calm” on the way to orbit, Sarah Walker, director of Dragon mission management at SpaceX, said during a post-launch press conference.

“It was all really smooth, probably the quietest countdown I’ve heard on console yet, and the weather finally cooperated,” Walker said.

One of the previous delays was due to concerns that rough weather in the Atlantic Ocean would jeopardize a landing of the capsule at sea in the event of an emergency abort.

The launch is the fourth for SpaceX carrying astronauts, and the fifth carrying people after the all-private Inspiration4 mission in August.

Despite the successes, NASA is trying to remain vigilant for any problems with hardware or systems, Steve Stich, the agency’s commercial crew program manager, said in the conference.

“We’re really trying to get into this cadence of looking at all the data, not becoming complacent, digging into problems. And that’s the kind of culture we have,” Stich said.

The astronauts heading to the space station are Chari, 44, pilot Thomas Marshburn, 61, and mission specialists Kayla Barron, 34, and Matthias Maurer, 51, a German astronaut. Chari, Barron and Maurer will be making their first trip into space.

Maurer will be counted as the 600th person in history to fly into space, according to NASA, while Barron is the 601st.

SpaceX successfully recovered the first-stage booster on its new Shortfall of Gravitas drone ship in the Atlantic Ocean.

The capsule, named Endurance, is on its maiden voyage with a few upgrades SpaceX added based on two earlier Crew Dragons.

The crew is to spend six months in orbit performing science experiments, spacewalks and space station maintenance before returning with a splashdown off the coast of Florida.

Such experiments include multiple studies of astronaut health during long periods in space, plant growth without soil in microgravity and a demonstration of sensors that could help flying robots navigate spaceships like the space station.

The launch comes on the heels of SpaceX Crew-2 Dragon returning from the International Space Station on Monday night. Once at the space station, Crew-3 will join NASA astronaut Mark Vande Hei and two Russian cosmonauts who are still on board.