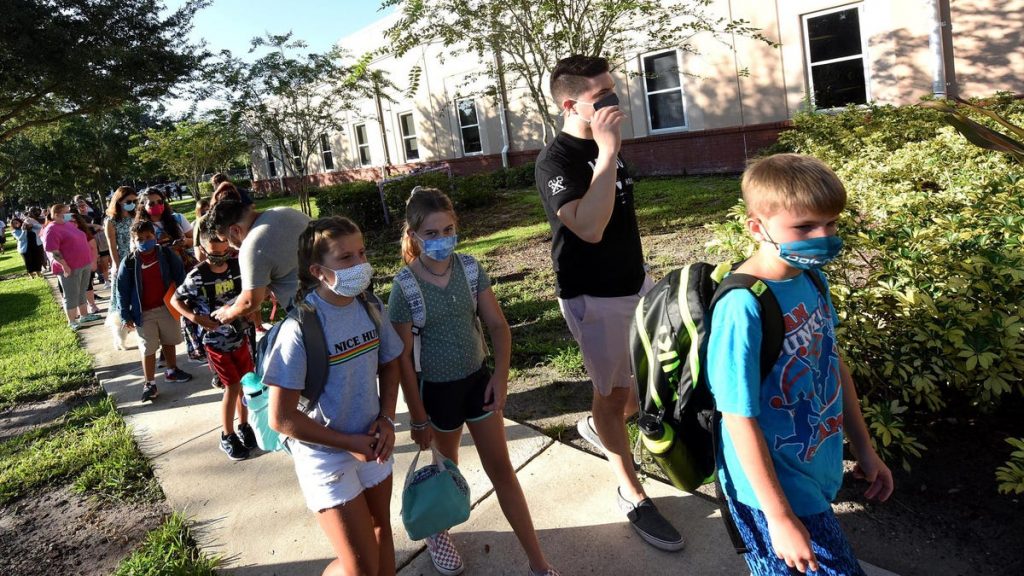 A majority of Florida adults approve of school mask mandates despite a state-level ban against them and do not support the state withholding funding from districts that require masks, a new Quinnipiac poll finds, as a growing number of Florida school districts have flouted the state policy in recent days to impose their own mask orders.

Separately, 54% believe schools should be allowed to mandate masks—as they are now prohibited from doing by the state—while 44% support the Florida government’s position that parents should instead decide whether or not their children should wear masks.

A larger majority, 69%, believe it’s a bad idea for the state to withhold school leaderships’ salaries if they mandate masks, while only 25% support it.

While only 20% of Republicans support schools imposing mask orders, Floridians of both parties disapprove of the funding cuts, with 52% of Republicans saying it’s a bad idea versus 91% of Democrats.

Most Floridians also back vaccine mandates for teachers, with 60% supporting them.

Beyond schools, 68% believe local officials should be able to mandate masks indoors if necessary—local governments in Florida, like schools, are also prohibited from imposing enforceable mask mandates—and 59% support everyone being required to wear masks indoors.

73%. That’s the percentage of Floridians that believe the spread of Covid-19 in the state is a “big problem,” with 59% saying it’s “out of control.” A 61% majority believes the state’s outbreak was preventable.

Florida’s order barring mask mandates in schools—one of nine such state restrictions that have been enacted nationwide—has become a major source of controversy as a new school year begins while the state is facing a massive Covid-19 outbreak. The state board of education voted to formally sanction the first two districts that imposed strict mask mandates last week, and said it would withhold an amount of funding equivalent to school board members’ salaries from the districts if they did not comply with the state rules. Rather than falling in line after the state took action, however, more districts have instead followed suit in recent days and also voted to revolt against the state by mandating masks. At least eight Florida school districts now require masks—up from two a week ago—including those covering many of the state’s largest cities, such as Miami, Tampa, Palm Beach, Jacksonville, Sarasota and Tallahassee.

Even more Florida school districts could vote to impose mandates and violate the state policy, with school administrators in Orange County—where Orlando is located—facing pressure to enact their own mask requirement. The state has threatened more consequences could be coming for the new districts that have implemented mandates, with Christina Pushaw, spokesperson for Gov. Ron DeSantis, telling Forbes in an email last week school board members “found to be in violation of state law will face consequences.” There’s also a chance that the school mask mandate ban could be struck down in court, as a three-day hearing kicked off Monday in one of the multiple lawsuits that’s been filed against the state policy.

DeSantis, who has fought against imposing Covid-19 restrictions and downplayed the severity of the state’s outbreak, received slightly negative marks for his leadership in the Quinnipiac poll, with 46% saying he is “hurting efforts to slow the spread of Covid-19” versus 41% who say he’s helping them. The governor still retains support among Republicans, however, with 75% saying he’s helping and only 12% saying he’s hurting efforts.