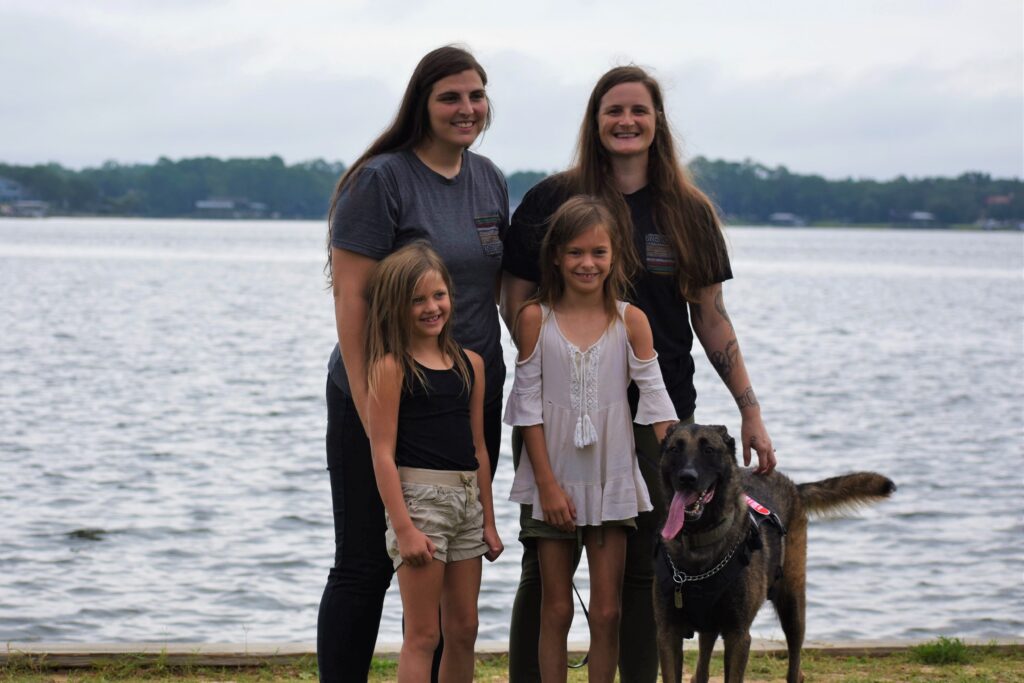 “American Humane is thrilled Luna will get the retirement she deserves, amongst a loving family where she can bask in the Florida sun,” said Dr. Robin Ganzert, president & CEO of American Humane. “All brave military K-9s deserve restful retirements with those who care for them most – the men and women they serve alongside.”

Luna is a seven-year-old Belgian Malinois who served at Osan Air Base in Korea as a patrol dog. At 80 pounds, Luna is large for her breed and full of life. After injuring her leg, Luna was unable to make a full recovery and, as a result, was retired early. Now that she’s with her beloved battle buddy and new family in Florida, Luna will be able to enjoy a well-earned retirement.

“It’s wonderful to have Luna home and relaxed,” said SSgt Allio Easom. “I cannot wait to take her on hikes and make sure she enjoys her retirement.”

MWD Luna is now a permanent member of SSgt Allio Easom’s family in Florida, which includes her wife and two young daughters. SSgt Allio Easom has served in the U.S. Air Force for nearly nine years and for the past five has worked as a handler. While stationed at Osan Air Base, Allio-Easom began working as a trainer, keeping all the patrol and explosive dogs in tip-top shape for their duties. Out of the dogs she worked with at Osan, Luna was by far her favorite.

Eglin Federal Credit Union President/CEO Jerry Williams said “EFCU has served our local military families since 1954. Co-sponsoring with Emerald Coast Harley-Davidson and hosting the reunification of Luna with SSgt Allio Easom, was an awesome privilege. SSgt Allio Easom has recently been stationed at Hurlburt Field. When we were contacted by American Humane for support we immediately said ‘Yes.’ This a great program and a small way to show our gratitude to the men and women of the U.S. Armed Forces.  It also demonstrates the importance that Eglin Federal Credit Union and Emerald Coast Harley-Davidson place on building lasting relationships. The reunification at our Fort Walton Beach branch was a great day not only for Luna and SSgt Allio Easom, but also for all of us who had the opportunity to celebrate this emotional and happy reunion.”

American Humane Veterinarian Dr. Lesa Staubus traveled to Florida to ensure Luna’s health and safety during her long journey home from Korea. American Humane has worked alongside the U.S. Armed Forces for more than a century. Whenever retired MWDs need assistance getting back home, American Humane is happy to help reunite these brave K-9s with the people who care most about them – their former handlers.

“Military Working Dogs play an invaluable role in keeping our men and women safe, both at home and abroad. Their well-trained noses can sniff out dangers better than any modern technology,” said Dr. Ganzert. “It’s only fitting that these dogs who devote their lives to the defense of freedom are afforded a joyful retirement.”

Retired MWDs often have medical issues stemming from their physical jobs. American Humane recently launched a Military Working Dog Reunification fund which will make it possible to bring even more of our K-9 veterans home, thanks to the generous help of donors and supporters. Proceeds from this fund will also help provide free specialty and preventative medical care to make retired MWDs as healthy and comfortable as possible during retirement.