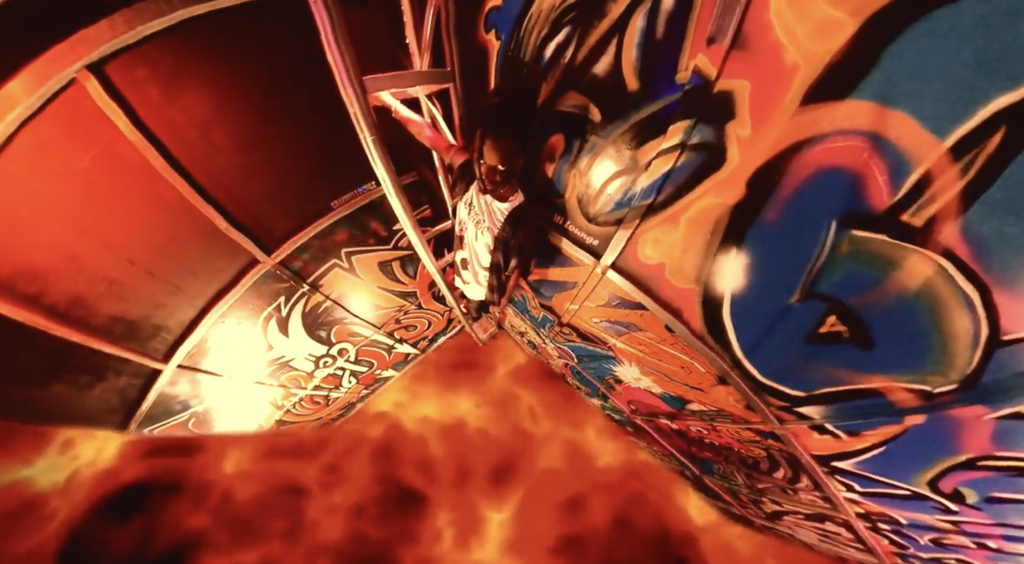 Marlo Smith is completely self-made—a multi-disciplinary artist and musician who has self-released all of his projects. Having spent half of his life in Washington Heights, New York and the other half in Broward County, Florida, the independent rapper learned hustle and patience in equal measures. Presently based in Harlem, Smith caught up with Noisey to discuss “B*TCH,” a banger in which he raps about resilience over deep metal guitars. The song’s repetitive hook, “B*tch, I’m back!” builds steadily throughout the track, picking up momentum and power with each heightened reiteration. These aren’t just words; they’re a statement of purpose.

The video for “B*TCH” is a tribute to the Florida vivacity that has informed his life and artistry and was filmed with a team of friends and collaborators that have helped Marlo in crafting his releases, including J Sebastian, B-Hall, The Tane, and FiELDTRip. It features the crew dancing and rapping in parking lots, accompanied by shots of Marlo climbing through the flames of an industrial wasteland. The visuals literalize his ascent: rising from the depths and propelling to new heights with each project.

“I wanted to encapsulate that fun and outlandish energy—that front-porch, parking-lot-party energy, but I was also intending to tap into my friends, our triumphs and shortcomings, people we’ve lost, and put that on display with the song,” he said of the video.

“B*TCH,” with its reverb guitars and brooding drums, is also a hearty introduction to more new music coming from Smith this summer with his next release, Project Flawda. In revisiting the path that led him to creating the EP, Smith said that a difficult transition in his life resulted in a moment of transformation. Returning to Florida after losing his academic scholarship from St. John’s University in New York in 2009, he wasn’t sure if he would ever find success so he “turned to music and writing as therapy,” as Smith recalled.

Smith is reflective about what it took to get him to where he is today—pausing to articulate the role that his fear of failure played in his ultimate journey.

“Every coin that has heads also has tails. There is duality in everything,” he said. “I’m very much a thinker, for better or worse.” For him, that level of deep contemplation has also led to bouts of anxiety. “I used to feel bad about having it and it felt debilitating, but I recognize it to be something that comes with the territory of caring. I have accepted that because I think there are great things that come from it.”

Smith’s catalog is rooted in experiences that were pivotal to the rapper’s maturation. Smith’s first EP, Black Boy, grew from a collaboration with an unlikely connection that he built at his retail tech job.

“I got a job for Sony training Best Buy reps. There was another rep for the competitor, Samsung, who was supposedly my mortal enemy, but we ended up talking,” he said. “That rep, Kelvin Dickens, became my producer, graphic designer, and creative director.” Black Boy, their first team up, was a concise but fully baked debut that was handled with meticulous care; its tracks are stacked with poetry about self-advocacy and self-reflection.

Smith remembers every last detail about his first EP’s release, down to the sticks of palo santo—a wild tree native to Peru and Venezuela which is believed to have purifying properties when it’s burned—at the listening party. “I had every detail planned out,” he said. “I was hoping it could be a truly multi-sensory experience, so even the calming smell was intentional.”

Smith finds opportunities to make magic out of the disparate connections in his storied life, whether it’s using his mother’s artwork as inspiration for his album covers or referencing pop cultural figures like Bad Boys’ Mike Lowrey—the police officer played by Will Smith in the long-running film franchise—in his music. He taps experimentally into sounds and wordplay that distance him from the ordinary, while interlacing his lyrics with messages of triumph. As he prepares for new horizons, B*TCH” is an invitation to release the fire within from an artist who has learned to love the heat and channel it.

ORIGINAL REPORTING ON EVERYTHING THAT MATTERS IN YOUR INBOX.