Marina Mokhnatkina is the PFL’s new queen of Sambo 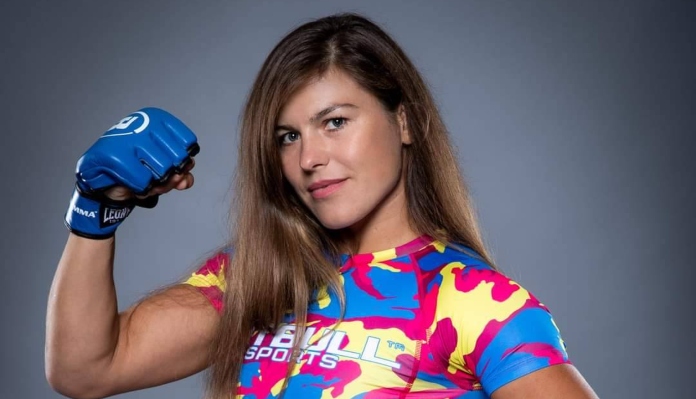 Russia’s Marina Mokhnatkina is on her way to the PFL. After achieving everything she could in Sambo, her intentions are clear: conquer MMA.

Mokhnatkina made the move to Florida’s Sanford MMA in February 2021 after initially negotiating with the neighboring American Top Team. The male-dominated gym originally greeted the 33-year old with skepticism, but she was quickly welcomed after her skills were displayed. Now, Mokhnatkina is the lone woman training at the gym daily.

Training with men was nothing new for Mokhnatkina despite the change of scenery. Back home, she recalls her female teammates considering her a “harsh” sparring partner that they didn’t really want to train with. Ultimately, that was and has become no problem for the Perm native as Mokhnatkina finds that the guys make fighting women in actual fights a bit easier.

Overall, the training climate is much different in America compared to Russia. Mokhnatkina has managed to branch out and receive that hard-to-achieve attention that doesn’t quite come in Russia.

“Unfortunately, in a majority of organizations in Russia, there are actually no women’s divisions,” Mokhnatkina told BJPenn.com. “For example, ACA (Absolute Championship Akhmat), they don’t have any women’s fights.

“Another problem, even if you fight for a promotion which has those weights and categories, it’s very hard to find an opponent for you. Because there are not many of them. That’s why many of the professional women fighters, they already move or start fighting abroad in different promotions and also look for how to develop, how to improve. I just followed their path.”

Mokhnatkina fought four times in her native country before getting the call from Bellator MMA. With the Fight Night Global promotion, she went 4-0 with all four of those victories coming via submission under three minutes — two of which were even under a minute.

Seeing the American side of MMA after her time in Fight Night Global made Mokhnatkina realize that Russia still has a lot to learn in more ways than just providing women with a platform. Noting that Bellator was simply a lot more organized, the Sambist felt the difficulties of adapting in full force upon her 2019 promotional debut opposite Australia’s Janay Harding.

The fight resulted in Mokhnatkina’s second career loss in what also happened to be her 145-pound featherweight debut. However, the challenges that she’s been tasked with up until this point are exactly what she hoped for — it’s still just the beginning.

“In Sambo, I had a vast career,” Mokhnatkina said. “I achieved everything that could be achieved. If you look at Sambo, I’m one of the most award-winning athletes. With human beings, you always want to reach other peaks, that’s why I decided to go further so there was nothing else to develop and that’s how I came to my current situation [in MMA].

“I’ve been observing PFL for a while now, and also many friends, many people I know, they’re now competing with them. What happened with Bellator? They offered us a contract, we viewed it, we didn’t like it. It was not so attractive and there were not many perspectives there. But PFL, once they knew I was in negotiations and I was free to sign, they gave me a good offer which was very reasonable and we just agreed and signed on that.”

With 10 gold medals in Sambo to her name, Mokhnatkina’s arrival in the PFL comes as somewhat of a surprise. Just this past June, a big unanimous decision win over the No-8 ranked Amanda Bell was attained.

Although it was only two fights over the course of two years, the Sanford MMA product found her time in Bellator extremely valuable as she prepares to embark on this next journey.

“In general, yes,” Mokhnatkina said of her Bellator experience being a positive one. “This [run] in Bellator gave me a lot in terms of improving my skills, getting more experience, being more goal-oriented. If you consider when looking back on the last two years, I didn’t fight at all because there was the long-lasting pandemic and other circumstances. After that, considering that I always had a dream to come to the U.S. and test myself here, it was a great opportunity. I’m thankful for it and I don’t feel like a newcomer anymore in the field of MMA in this country.”

As we kick off the start of August 2021, the PFL anticipates the start of this year’s playoff season. Each division will see their final four combatants slowly whittled down to the last men and women standing.

Mokhnatkina will miss out on the one-million-dollar grand prize this year in her new home of the 155-pound lightweight division — that doesn’t mean she won’t still get a chance to break in the new gloves.

Aug. 19 showcases the heavyweight men and lightweight women as the finals will be decided between each weight class’ semifinalists. Additionally, Mokhnatkina gets right back in action when taking on one of the sport’s pioneers, “The Striking Viking” Kaitlin Young.

“She’s a striker, she has great kickboxing and in general it will be interesting to see the battle between the grappling and the striking,” Mokhnatkina described. “I’m preparing very much and I think that will be an amazing experience because I understand that for the future in the Grand Prix there are no weak opponents so you need to fight with the best and more experienced [fighters] to go to the higher level.

“Before that fight [with Bell], as I mentioned it was a long time without a fight, so I intentionally wanted to lead that fight with the striking because I didn’t want to finish it quickly. In order to enjoy, in order to practice more and give me some time, and even at the end of the three rounds I was ready to fight more because I didn’t lose a lot of strength. So that was the idea. I think I needed to work more on that in that particular fight itself. Because in the past, for example, I could try to do grappling and put people on the ground, and sometimes when you hurry it can lead to mistakes and negative consequences.”

Mokhnatkina has many reasons to be excited for the start of her PFL tenure. Already locked in for next season’s tournament, cutting less weight will be nice — mostly for the restoration factor between relatively quick turnarounds.

Oh, there’s also that aforementioned huge prize that comes along with being the lightweight champion… In a sport where fighter pay continually finds itself as a hot-button issue, what more motivation from a numbers perspective could there be than seven figures?

“Yes, of course, it’s motivation to get the first place,” Mokhnatkina said. “And if you look to other promotions, I would say not many, maybe none, are ready to pay such a big monetary reward to women fighters. When you see that you’re so valued, of course, you try to do your best to work more because that’s our main thing.”

It’s no secret how difficult achieving the label of PFL champion has become, however. As evidenced by this season alone, numerous champions and notable names have struggled — so much so that some are missing out on the playoffs entirely.

For the women’s lightweights specifically, there’s one gargantuan obstacle that needs to be overcome to capture the gold — undefeated 10-0 two-time Olympic gold medalist Judoka, Kayla Harrison.

Aside from all the other bonuses of being on the roster, the challenge and test are still a major point of appeal for Mokhnatkina. When it comes to someone like Harrison, it’s impossible not to fantasize about an encounter.

“Of course I would like to meet and compete with such a high-level opponent,” she expressed. “Because, first of all, it means you’re already at the same high-level [yourself] if they consider you for this fight. Second, it’s very intriguing to see what will happen with the Sambo fights the Judo.

“What I understand is that she like everyone else is a human being. If you prepare well and do everything well, everyone has a chance to win. Just considering my current teammates, the guys, I feel myself more and more confident during any fight since I started training right here [in Sanford]. So it helps and improves, motivates a lot.”

In the end, Marina Mokhnatkina is just following her dream of being the best martial artist she can be. By simply competing, she helps carry a torch that progressively illuminates the cavern that is the talented pocket of women from her homeland.

“In general, for our women, especially fighting here, it helps a lot to motivate and give a good example to others,” Mokhnatkina stated. “Because, for example, even if you take myself, I receive a lot of letters, messages from people from Russia or even from the U.S. saying thank you. While at the same time saying, ‘[You’re] very pretty, as a woman you’re also a very professional fighter.’

“I think more women from Russia are competing in this type of sport. It shows that we’re equal with the men and our rights are not violated [or] looked at on a low side, and etc.”