Though Florida may seem like a distant state with very little in common with Massachusetts, Alejandra Caraballo, a clinical instructor at Harvard Law school, says Florida’s most recent anti-LGBTQ legislation isn’t an isolated instance.

The “Don’t Say Gay” bill has garnered a lot of media attention and has dominated conversations about LGBTQ rights lately.

The bill, dubbed “Don’t Say Gay” by opponents, is actually titled “Parental Rights in Education.” It seeks to ban certain instruction of sexual orientation and gender identity in the classroom and is now awaiting Gov. Ron DeSantis’s signature. He is expected to sign it.

“This has just been an unprecedented attack on LGBT rights,” Caraballo said.

The text of the bill says instruction by school staff or third parties “on sexual orientation or gender identity may not occur in kindergarten through grade 3 or in a manner that is not age appropriate or developmentally appropriate for students in accordance with state standards.”

“I can’t believe we are here in 2022 with them doing this,” Caraballo said. “We’re seeing attacks of LGBTQ people that folks didn’t think was possible post Obergefell. Trans folks are really the canary in the coal mine, but these attacks are ramping up.”

If DeSantis signs the bill, it will go into effect in July. Caraballo said this bill, in some ways, resembles Senate Bill 8, Texas’s abortion bill. Similar to that bill, “Don’t Say Gay” is enforced through private litigation — the state sets some standards in the bill, but the enforcement mechanism is not state-run.

“The problem with that is that essentially schools are gonna be very risk averse,” Caraballo said. “These lawsuits can be costly to defend. Because so many of the terms in the law are so vague and undefined, they’re probably going to take the most expansive reading of these bills.”

Caraballo said once the bill goes into effect, a major rollback of LGBTQ-friendly policies at schools is likely. She said there will likely be some early lawsuits that contribute to more “scared reactions” to the bill. She said there are also potential First Amendment issues.

“I can imagine if someone in second or third grade brought up that they had a female teacher [who] brought up that she had a wife. If a student brings that up to their parents, the parents may be upset and file a lawsuit,” Caraballo said. “You have this chilling effect. And that’s the point right? It’s not necessarily that they want a ton of lawsuits to file, it’s the chilling effect by the threat of lawsuits.”

The bill also singles out a specific group by limiting discussion of the LGBTQ community, which Caraballo says could open it up to “a whole host of serious legal ramifications and challenges and infringement for people.”

This bill is not the only anti-LGBTQ legislation in process though, Caraballo said.

“This isn’t an isolated event. So this year, there’s over 115 specifically anti-trans bills proposed,” Caraballo said. “We’re seeing the largest unprecedented number of anti-LGBTQ bills in history. … This isn’t coming out of nowhere, right? This is a very strong reactionary movement. … If you look at the trends, like it’s only getting worse year after year.”

There are multiple states trying to pass sports bans for transgender kids. In Tennessee, there are bills pending that would restrict gender-affirming care for minors. Even as close as New Hampshire, proposed legislation is targeting LGBTQ people. The bill in New Hampshire would redefine how the state views sex and limit it only to the gender marker is at birth.

Caraballo said she is not aware of any legislation targeting the LGBTQ community in Massachusetts.

“For a lot of people who haven’t been paying attention, they’re caught off guard about the ‘Don’t Say Gay’ bill in Florida,” Caraballo said. “I think people need to pay more attention to what is happening around the country and their state legislatures. We’re going to probably have more anti-LGBTQ bills passed this year than we’ve had in decades. … It’s a real issue, and I think people need to pay attention more to it.”

All in all, 2022 is poised to be the year with the most anti-LGBTQ legislation in United States history.

Caraballo has been very vocal about this specific bill on Twitter in recent days. And she is not alone. Both supporters and opponents in Massachusetts have taken to Twitter to share their thoughts. Candidate for attorney general Quentin Palfrey tweeted his opposition to the bill earlier this week.

Revere City Councilor at-large Steven Morabito joined the chorus against the bill a few days ago.

The “Don’t Say Gay” bill has also gained traction in everyday conversation because of Disney’s involvement.

The Orlando Sentinel reported Feb. 24 that Disney had given money to every single sponsor and co-sponsor of the bill. Disney has since pledged money to the Human Rights Campaign (though the organization won’t accept it until meaningful action against the bill has been taken) and has made public statements on the matter, though fans are not satisfied with the response.

Caraballo said this type of legislation has a massive ability to hurt LGBTQ kids. Not having the language to describe your own orientation or gender identity can make the coming out process harder for many people.

The bill has also drawn criticism from the White House.

“It is certainly something that is not helping, you know, young people who are members of the LGBTQI+ community who are already vulnerable, already being bullied,” White House press secretary Jen Psaki said when asked about the Florida legislation in February.

Caraballo said it is important to support the LGBTQ community both in Texas and locally.

“Try and find smaller local community orgs in your local community,” Caraballo said. “If you’re upset about what’s going on in Texas, donate to the Transgender Education Network of Texas. … They’re really leading the fight. In Florida, you’ve got groups like Equality Florida, but you’ve got like smaller groups like Arianna’s Center in Miami.”

Donating time, money, and clothes are all great ways to help out, Caraballo said.

“If you know somebody who’s queer, anybody whose trans, reach out to them and make sure they’re OK” Caraballo said. “It doesn’t have to be anything big, just, ‘Hey, how are you doing?’ Because I think we’re all suffering a really, really hard time right now.”

Stay up to date on all the latest news from Boston.com 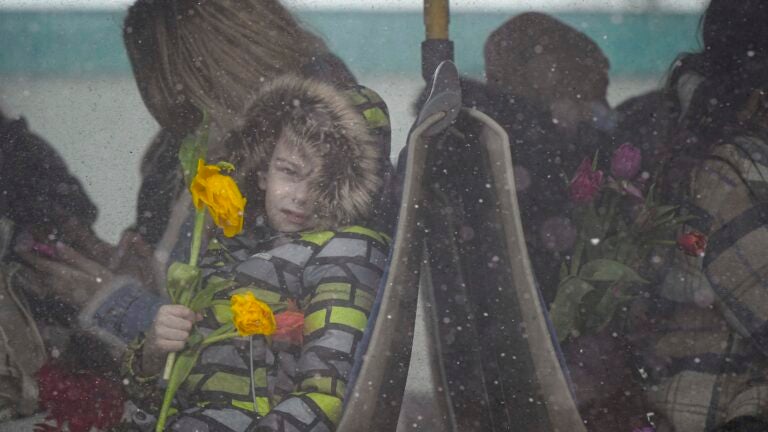