Man o’ war are on South Florida beaches. What you need to know about the health risks 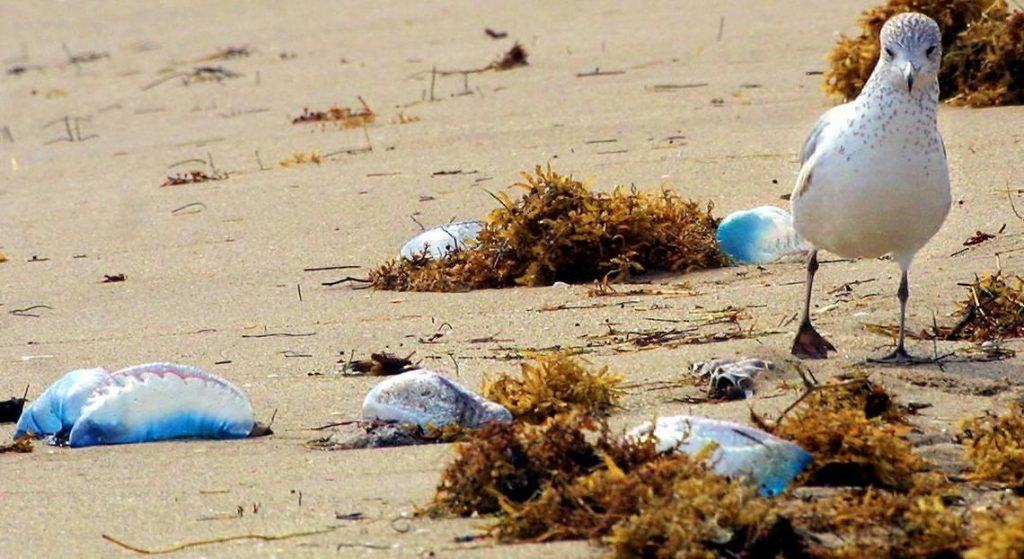 Natives probably know the primary thing to do when they see those pretty blue and purple bubbles that look like partially deflated balloons on the beach.

Don’t pick them up!

Spring on South Florida beaches is not just for spring breakers and swimmers. Spring is also often about the return of Portuguese man o’ war.

These sea creatures are best viewed from afar because they have tentacles — and even when the creatures lie immobile on the beach, they’ve enough juice to sting.

Beachgoers have noticed the man o’ war in Miami-Dade and Broward, including the Crandon Beach, South Beach and Hollywood shorelines.

What is a Portuguese man o’ war?

The Portuguese man o’ war is often called a jellyfish, but is actually a species of siphonophore, a group of animals that are closely related to jellyfish, according to the National Oceanic and Atmospheric Administration.

The Portugues man o’ war resembles 18th-century Portuguese warships under full sail, according to NOAA. They are propelled by the wind and sea currents.

The man o’ war, which likes warmer waters in the tropics, has a balloon-like float and its colors can vary. The float can be blue, violet or pink and looms up to six inches above the waterline or shoreline once washed up on the beach.

What makes them a pain?

Under the floating bubble — a gas-filled bladder — you’ll find long strands of tentacles and polyps that can grow to an average of 30 feet and may extend by as much as 100 feet, NOAA says.

Those tentacles are what you especially don’t want to come into contact with because they contain stinging nematocysts — “microscopic capsules loaded with coiled, barbed tubes that deliver venom capable of paralyzing and killing small fish and crustaceans,” NOAA says.

Our body mass is larger than that of a small fish so the man o’ war sting is rarely deadly to people. That said, the sting, which will cause red welts and sometimes fever and nausea, can cause an allergic reaction in some people and in rare cases, heart failure, MDFR Ocean Rescue warns. Even when the man o’ war washes up on the sand and bakes on the beach for weeks, those long blue tentacles contain venom.

What to do if you’re stung

Here are some tips from American Oceans:

▪ Get the tentacles off your skin. But be careful how you do that. Don’t pluck them off with your bare hands lest you get stung there, too. Instead, wash them off with salt water and not fresh water because fresh could cause the sting to become more intense, according to oceanic experts. You can also use an object, like a stick or utensil, to get the tentacles off and away from you.

▪ Ice the stung area. This will reduce swelling and pain, which generally should subside after 30 minutes or so.

▪ Get medical attention if you are feeling lightheaded, dizzy or having trouble breathing.

▪ Listen to the lifeguards. If they tell you to get out of the water, do so. If you see flags posted on the shore warning of man o’ war, keep alert. Let a lifeguard know if you see them around. Sometimes they look like a blue plastic bag floating on a wave or discarded on the sand. They aren’t goodie bags left behind by a spring breaker.