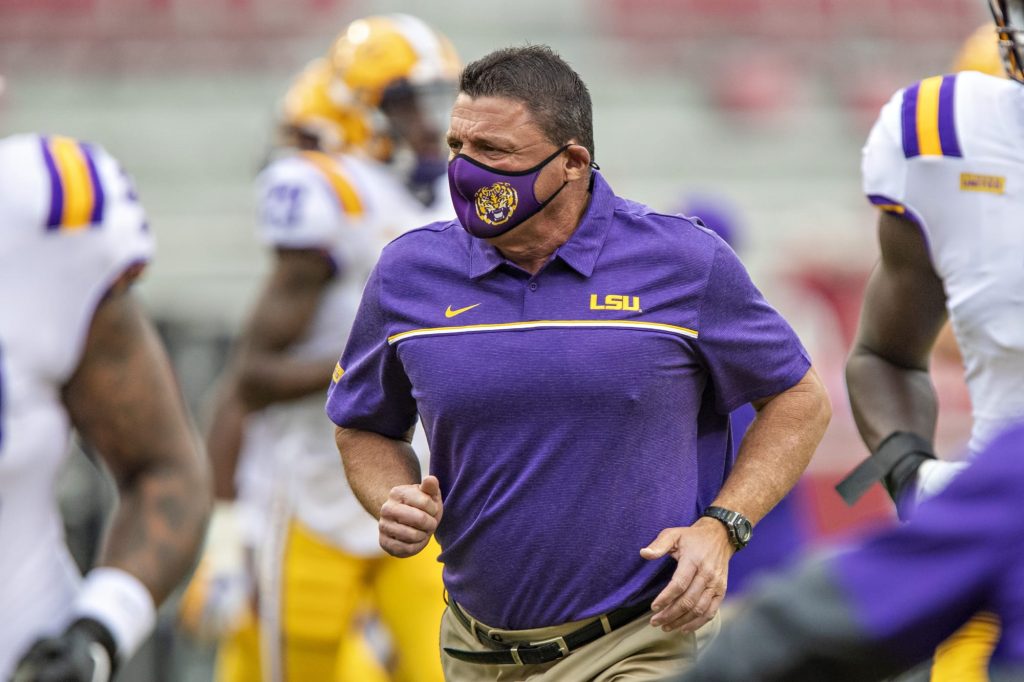 Now that the Ed Orgeron era is officially coming to a close, there is one name on the list of outside-the-box LSU coaching candidates that need to be considered.

Despite the fact that LSU upset the Florida Gators Saturday, it appears as if the Tigers have had enough of Ed Orgeron as the head coach in Baton Rouge. LSU and Ed Orgeron are apparently set to split once this season comes to an end.

#LSU and Ed Orgeron have reached a separation agreement: He will not return in 2022 but expected to complete this season, sources tell @SINow.

It’s unprecedented in the sport – coach & school divorcing 21 months after winning it all.

The LSU job is obviously one many will be interested in and the Tigers will have an abundance of possible coaches available to them.

But if they wanted to look outside the box a bit and find someone with some SEC experience who has a couple of wins over Alabama, Hugh Freeze would be an intriguing option.

Freeze has coached throughout the South with the bulk of his head coaching experience being in the SEC West. He got his start at Arkansas State, won 10 games with the Red Wolves, and then made his way to Oxford, where he eventually guided the Rebels to four winning seasons, four bowl games (including the Sugar Bowl and the Peach Bowl) and back-to-back wins over the Crimson Tide in 2014 and 2015.

During his tenure as the head coach of the Ole Miss Rebels, Freeze went 39-25, steadily improving the program while he was there with an explosive offense and some incredibly highly ranked recruits.

So, why not replace one former Ole Miss coach with another? Why not consider Freeze to be LSU’s next head coach?

Will the LSU Tigers consider an unconventional option to replace Ed Orgeron?

Well, Freeze comes with plenty of baggage. His tenure at Ole Miss ended abruptly while the Rebels were surrounded by some fairly significant scandals. Given that LSU is handling some scandals of its own, it may not be the best idea to court a coach whose previous program attracted scrutiny from multiple angles while he was leading it.

Of all the wins Ole Miss got while Freeze was in Oxford, the Rebels actually had to vacate 27 of them due to NCAA sanctions.

But Freeze is working to distance himself from what happened at Ole Miss while he leads Liberty. And since he’s been coaching the Flames, he’s generally avoided negative publicity while winning. During his first two seasons in Lynchburg, Freeze went 18-6 and won a couple Cure Bowls and Liberty is off to a promising 5-2 start this season.

When it comes to what happens on the field, Freeze is a winner. As long as things off the field are kept clean and quiet, he’s a decent option to have as a head coach. Especially considering his track record of developing explosive offenses that give Nick Saban and Alabama fits.

The Tigers will have a multitude of great coaching candidates interested in the position as they search for Orgeron’s replacement, but if they want to consider someone who has experience beating Saban in back-to-back seasons, Freeze has that on his resume.