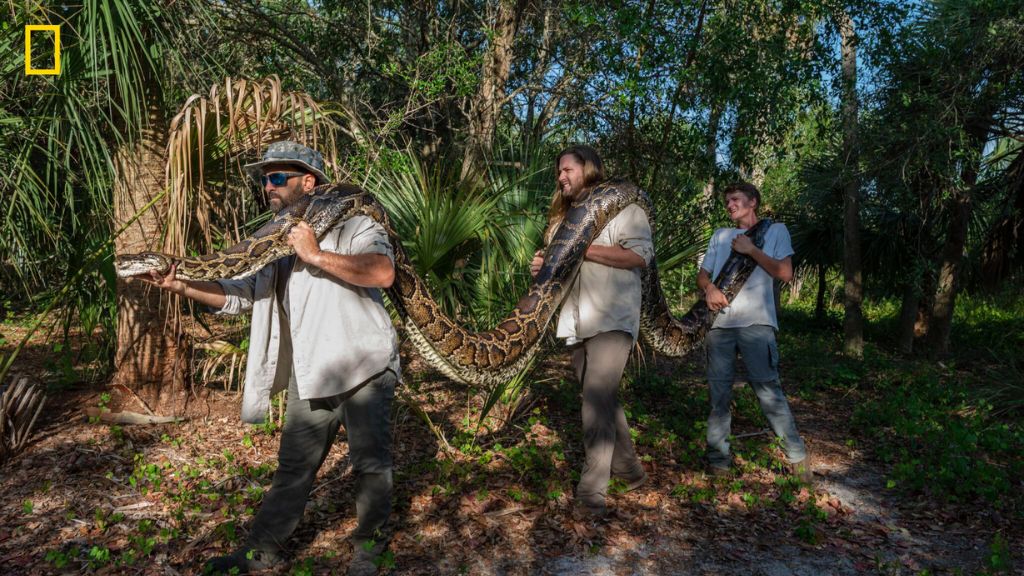 The largest Burmese python ever seen in Florida has been discovered, lured out of its hiding place in the Everglades by researchers who used another python as bait, National Geographic reported (opens in new tab).

The gargantuan snake was a female, measuring nearly 18 feet (5.4 meters) long and weighing 215 pounds (97 kilograms) — 30 pounds (13.6 kg) more than the next-largest python ever found in the state. Most Burmese pythons (Python bivittatus) that are found in Florida range between 6 and 10 feet (1.8 and 3 m) long, although in their native habitats in Southeast Asia, the snakes commonly reach 18 feet long (5.4 m) and the largest can reach lengths of 20 feet (6 m) or more, according to the Florida Fish and Wildlife Conservation Commission (opens in new tab).

Since being introduced in Florida in the 1970s, the invasive pythons have bred successfully in the southern regions of the state, where they prey on many native birds and mammals, as well as the occasional alligator or pet dog.

Despite being larger than most of Florida’s native snake species, Burmese pythons are extremely difficult to spot within the vast marshlands, woodlands and subtropical forests of the Everglades and adjacent areas. In an effort to reduce these invasive populations by drawing reproductively active females out of hiding, python trackers at the Conservancy of Southwest Florida, a Naples-based organization, implant GPS trackers inside male pythons and then send these “scout snakes” slithering into the wild, according to National Geographic.

Related: Watch a python swallow an impala whole in this jaw-dropping video

“Large reproductive female pythons are very important to remove from these ecosystems,” because they are disproportionately capable of producing many offspring, Sarah Funck, a biologist with the Florida Fish and Wildlife Conservation Commission, told National Geographic.

A 12-foot-long (3.7 m) scout snake named Dionysus — nicknamed Dion — served as bait for the record-setting female that the team captured, back in December 2021.

At that time, the team noticed Dion had stationed himself in one particular location near Naples, within the western Everglades’ ecosystem. When they went to check on their scout snake, they found him coiled near a monstrous female; after an intense wrestling match, the researchers managed to wrangle the huge female into a bag, which they then secured in a tub and transported to their research facility. (Dion, meanwhile, survived the encounter and continued scouting for the Conservancy.)

After euthanizing the female snake, the team performed a necropsy on the hefty python. Inside its body, they found a record 122 egg “follicles” — roughly spherical structures that mature into eggs once fertilized. In the snake’s digestive tract, they found bits of fur, clumps of dissolved bone and a chunk of a hoof, evidence that the python’s last meal was an adult white-tailed deer.

Based on similar necropsies conducted in the past, scientists have learned that Burmese pythons prey on an estimated 24 mammal species, 47 bird species and two reptile species in the state of Florida, according to National Geographic.

“These pythons have the ability to totally alter the ecosystem, and I would say they probably already have,” Kristen Hart, an ecologist with the U.S. Geological Survey Wetland and Aquatic Research Center and a collaborator with the conservancy team, told National Geographic.

Read more about the record-breaking python at natgeo.com (opens in new tab).

Nicoletta Lanese is a staff writer for Live Science covering health and medicine, along with an assortment of biology, animal, environment and climate stories. She holds degrees in neuroscience and dance from the University of Florida and a graduate certificate in science communication from the University of California, Santa Cruz. Her work has appeared in The Scientist Magazine, Science News, The San Jose Mercury News and Mongabay, among other outlets.