Kleiman vs Wright Trial in Florida: Did Ira Kleiman just get caught in a lie? 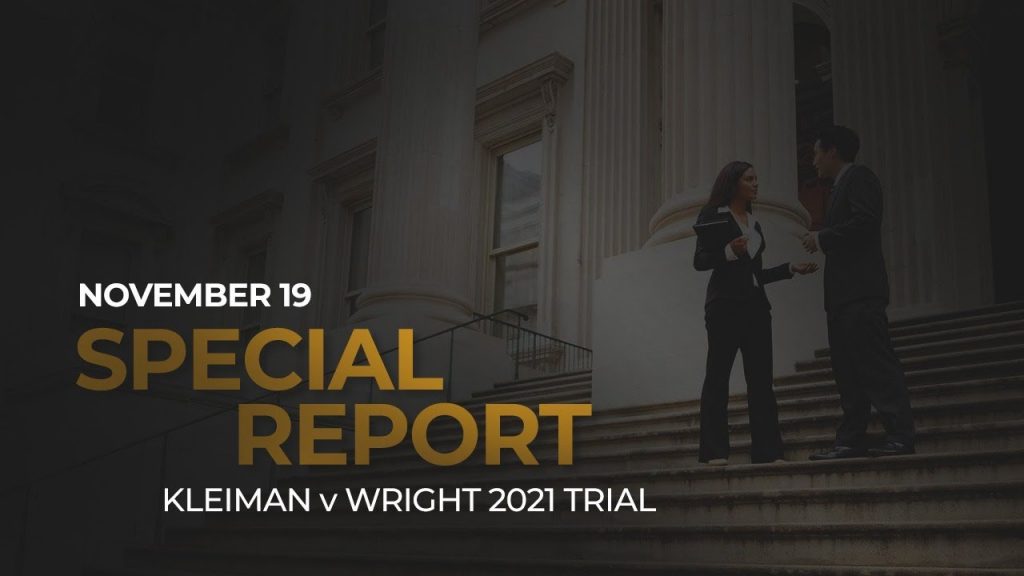 Home » Business » Kleiman vs Wright Trial in Florida: Did Ira Kleiman just get caught in a lie?

With billions of dollars in Bitcoin and intellectual property at stake, it’s fair to say the outcome of Kleiman v Wright is highly consequential. It will be for Ira Kleiman, at least: as the sole beneficiary of Dave Kleiman’s estate, any share of the Satoshi Nakamoto partnership awarded in this case will flow to him.

Safe to say, the outcome of the case means a lot to him. This week, the Miami jury may have gotten a look into just how much.

When Ira Kleiman took the stand back in the first week of trial, he was grilled by Andrés Rivero on a response he’d given in his videotaped deposition back in April of 2019. He had been asked whether he knew of any witnesses who say that Dave owned Bitcoin.

This is a critical question, because despite there being numerous examples on the record of Dave Kleiman excitedly sharing the details of his projects with friends and family, there’s no such examples of him talking about being involved in Bitcoin while he was alive.

At the time of the deposition, Ira confirmed this exact point: he said as far as he knew, Dave had never told any of his friends about anything to do with Bitcoin during his life. The lone exception, of course, is Ira Kleiman’s dubious Thanksgiving dinner conversation in 2009.

But almost three years later, under cross examination by attorney for the defense Andrés Rivero in the Miami courtroom last week, he told the jury something quite different.

Rather than never hearing from any of Dave Kleiman’s friends about Bitcoin, Ira Kleiman began claiming that his brother had in fact had conversations about Bitcoin with at least two of them: Patrick Paige and Kimon Andreou.

According to Ira’s new story, they had both related to him conversations they apparently had with Dave before his death which Ira says ran along the same lines as his infamous alleged Thanksgiving dinner conversation with Dave. He was adamant—even with the benefit of an overnight break—that both Patrick Paige and Kimon Andreou had been told about Bitcoin by Dave during his lifetime.

The ears of the defense immediately pricked up at this testimony, because Patrick Paige had sat in Ira’s exact seat just days before and gave the following sworn testimony:

Q (Andrés Rivero for the defense): So during David Kleiman’s lifetime, despite all the conversations that you had with him, he never told you that he had Bitcoin, right?

Q: In fact, during his lifetime, he didn’t mention Bitcoin at all to you, right?

Q: And during his lifetime, he never told you that he mined bitcoin, right?

Paige was as adamant about never having talked to David Kleiman about Bitcoin as his brother was that he had. Rivero put Paige’s testimony to Ira:

Q: Do you understand that Patrick Paige has already testified here?

Q: And you know that Patrick Paige testified that he never talked with David Kleiman about Bitcoin or anything to do with it?

A: That’s also not correct.

Q: Sir, do you understand that we’re calling Kimon Andreou and he’s going to be in this courtroom?

Q: And your testimony is that you heard Kimon Andreou tell you: I had a conversation with David Kleiman when he was alive, like that one you say you had on Thanksgiving, November 26th, 2009.

A: It’s not the exact conversation. But he said something like: Dave told me something similar, and I chalked it up to that he was just mining Bitcoin.

The mention of Andreou’s impending testimony seems to have caused Ira to offer a slightly less committed answer, but he nonetheless doubled down on his claim.

As Rivero promised, this week, the defense called Kimon Andreou to the stand.

Q: Ira Kleiman claimed you did. Did you ever?

It’s hard to imagine a clearer refutation of Ira’s story than that.

The Thanksgiving 2009 tale is spectacularly convenient for Ira: a conversation no one else heard at an empty Thanksgiving dinner table which supposedly confirms that Dave was working on Bitcoin in its earliest days.

The only thing more convenient than that would be Ira Kleiman suddenly remembering that Dave actually told the same fantastical story to his best friends, thereby filling in perhaps the biggest hole in a lawsuit full of holes: that Dave Kleiman never breathed a word about Bitcoin to any of friends or family during his life.

Less convenient is the fact that neither friend was willing to corroborate it under oath.

CoinGeek features Kurt Wuckert Jr. in recap coverage which will be livestreamed daily at 6:30 p.m. EST on our YouTube Channel.

Check out all of the CoinGeek special reports on the Kleiman v Wright YouTube playlist.