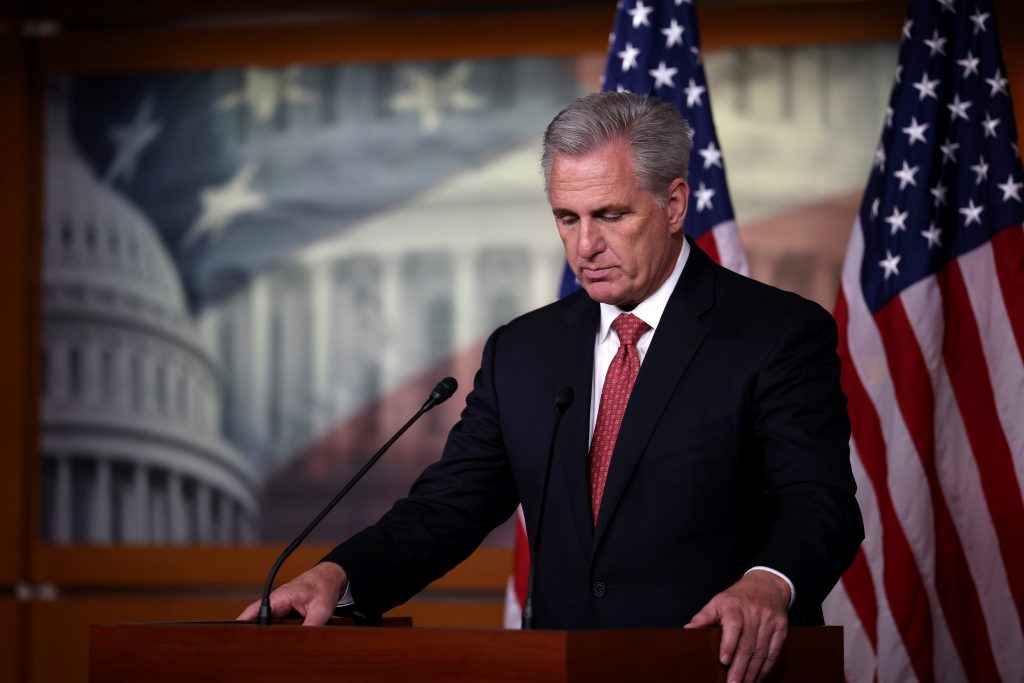 Over the last week or so, congressional Republicans, with increasing audacity, have vowed that there would be repercussions for tech companies that complied with a request by the congressional committee investigating the January 6 attack on the Capitol.

The committee is seeking the phone call records of individuals, including some GOP House members, who are suspected of abetting the insurrection. Republicans, seemingly nervous about what the committee might unearth, are threatening retaliation against the companies if they take the majority in 2023.

And at the vanguard of those threats has been House Minority Leader Kevin McCarthy, who has cited conservative Commissioner Brendan Carr of the Federal Communications Commission to push back on the committee’s demand to preserve call records for about a dozen people in connection to the mob attack. The committee has specifically asked for McCarthy’s own records to be preserved as part of its investigation.

McCarthy and Carr have formed a sort of circular echo chamber pushing back on the demand from Representative Bennie Thompson, chair of the January 6 committee.

Carr was quoted in a Wall Street Journal editorial saying federal law requires telecommunications companies to “protect the privacy and confidentiality of Americans’ call records.” The article was tweeted by the Journal’s Kimberly Strassel and then retweeted by McCarthy. McCarthy’s office also circulated the editorial last week. It was a major rationale the top Republicans and others began using to try and convince the telecom companies not to follow the committee’s request.

The argument is in response to the committee’s broad request for a number of telecom records that relate to the hours leading up to the mob attack on the Capitol. McCarthy is one of the members of Congress whose records the committee is seeking in that request. The list of lawmakers also includes some of Trump’s most avid supporters on Capitol Hill, such as Representatives Marjorie Taylor Greene, Louie Gohmert, and Madison Cawthorn. McCarthy’s office has called the request an “unserious” political stunt, and the lawmakers have tried to preempt the companies by arguing it would be illegal to hand over the records.

The committee has brushed off McCarthy’s argument. In a statement, an aide for the January 6 committee called McCarthy’s claim “baseless.”

“The Select Committee has asked companies not to destroy records that may provide answers to the American people about what happened on January 6th and in the runup to that day. Subsequent requests for production of this material will comply with applicable legal requirements,” the aide said. “The Select Committee is mindful of the privacy interests of all of those involved in the investigation, which is reflected in our desire to maintain the confidentiality of the specific individuals identified in the preservation requests. Numerous outside legal experts have weighed in saying that Mr. McCarthy’s claim is baseless. His own explanation is that Congress can only obtain records if there’s a legislative purpose, which is in fact explicitly stated in the Select Committee’s mandate in House Resolution 503.”

One such expert is Tom Wheeler, who chaired the FCC during Barack Obama’s second term. “Commissioner Carr’s statement would seem to be grounded more in political convenience than telecom policy,” Wheeler said in an email to The New Republic. Wheeler was skeptical about the core argument that Carr and McCarthy are making—that committee Chairman Bennie Thompson is picking and choosing which records he wants turned over to the committee.

“There’s two issues here. Number one, I don’t think this is a single member of Congress, is it?” Wheeler said. “And number two, the data that he chooses? No. This is about an insurrection.”

Conspicuously, Carr, a former telecommunications attorney and aide to former FCC Commissioner Ajit Pai, is married to Machalagh Carr, McCarthy’s general counsel, a position that would give her a major role in writing the statement McCarthy released Tuesday night, which is in line with Carr’s argument.

McCarthy’s office pushed back when asked about any kind of conflict of interest for Carr and McCarthy. “Machalagh is the sharpest legal mind on the Hill, and any indication her work is conflicted is absurd,” McCarthy communications head Matt Sparks wrote in an email, in response to an inquiry from TNR.

Carr has never been press-shy, and in a 1,656-word email to me, he noted that his argument is one he’s been making since long before the January 6 records-preservation request. “I have repeatedly said that government requests for this data can (depending on the circumstances) run afoul of carriers’ section 222 obligation to safeguard this data,” Carr wrote in the email. Carr is arguing that federal law is clear that telecommunications companies are required to protect the data that the committee is seeking.

Carr finds himself on the Republican side of a larger political debate. During the Trump administration, Carr was a regular on conservative cable channels, warning about Big Tech’s partisanship and criticizing Communist leaders in Beijing for mishandling the coronavirus pandemic. On one occasion, Carr tweeted a long thread arguing that “Communist China” really “botched” the coronavirus outbreak.

Public arguments like that got Trump’s attention and won Carr retweets from the White House. It also got Carr more ink. Politico published a profile of him titled “Trump’s unexpected ally in the fight against tech.” In October, The Verge published an article about Carr titled, “Meet the man who could lead the GOP’s war on platform moderation.”

He’s also not a stranger to McCarthy or other top Republicans. In July, he tweeted about a press conference he participated in with Florida Governor Ron DeSantis and other lawmakers, urging President Biden to bring “internet service to Cubans to support their fight for freedom as Desantis called for.” In late June, Axios reported on an idea Carr had to tax large tech companies to subsidize funding broadband programs. McCarthy said the idea was “thought-provoking.”

Carr’s arguments are just one of the ways McCarthy and Republicans are fighting the committee’s work. Eleven House Republicans have written letters to tech companies promising to “pursue all legal remedies” if those companies end up handing over records the committee might subpoena. One of the letters, to Yahoo! Inc., was addressed to Marissa Mayer, who hasn’t been CEO of the company for years.

Similarly, McCarthy himself has warned that a “Republican majority will not forget” which companies followed through with the committee’s request or eventual subpoenas, an allusion to the fact that, if the usual midterm election pattern holds in 2022, McCarthy will be speaker of the House.

In a way, though, that’s the entire point for the Republicans opposed to the committee’s investigation. They want to turn it into another episode of petty gamesmanship on Capitol Hill. What better way to delegitimize an important investigation?