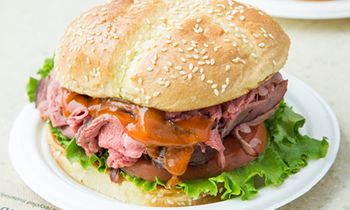 Revere, MA  (RestaurantNews.com)  Since 1951, Kelly’s Roast Beef has been a household name in Boston and throughout the Northeast. The brand has earned national attention in pop culture and has maintained a loyal cult following. Now, the iconic restaurant which proudly lays claim to having invented the North Shore roast beef sandwich aims to bring its authentic taste of New England to new communities throughout the nation with the launch of its franchise opportunity. Kelly’s Roast Beef has recently signed a commitment with three franchisee partners to build up to 43 units. These new units will be located in Florida and New England. Up to 20 restaurants will be located on the west coast of Florida including Naples, Ft. Meyers, and the suburbs of Tampa. Up to 17 restaurants will be located on the east coast including Miami, Palm Beach, and St. Lucie. Kelly’s is planning to open an additional six restaurants within the greater New England area including towns in Massachusetts and New Hampshire.

“Kelly’s Roast Beef has been a staple within the Boston community for over 70 years. During that time, we have perfected the roast beef sandwich and have been able to serve generations of families that love our brand and the delicious food we serve,” said Neil Newcomb, CEO of Kelly’s Roast Beef Franchising. “We think the time is right to offer franchise opportunities nationwide and we are looking forward to welcoming new partners who are ready to bring our revolutionary brand to new communities.”

The history of Kelly’s dates back seven decades when founders Frank McCarthy and Ray Carey first worked together at the Paul Roger House in Revere Beach. The duo instantly clicked and decided to become business partners, opening up a hot dog stand next door while continuing to work at the inn’s restaurant. The iconic roast beef sandwich was created on a whim one night after a wedding was canceled. Taking left over roast beef from the event, they began serving it on a grilled hamburger roll and the rest was history.

Since then, Kelly’s Roast Beef sandwich has become a local legend. The process begins with a carving machine thinly slices 25-day aged, medium-rare roasted sirloin-tip meat. The sirloin is then placed on a buttered, griddled hamburger roll, and topped with any condiments the customer desires plus a slice of cheese. A small sandwich gets five to six ounces of roast beef, while a large can get anywhere from seven-and-a-half to eight-and-a-half.

Today, a busy location during its peak season can sell upwards of 20,000 roast beef sandwiches a month. Across its multiple locations, Kelly’s estimates a staggering one million sandwiches are sold a year. The figures are impressive but equally impressive is that even in the face of tremendous volume, Kelly’s hasn’t gone towards a commissary set-up. Instead, each location roasts its beef in-house all through the day, ensuring that sandwiches can still be carved to order as they have been for decades. That, in and of itself, is the hallmark of a Kelly’s sandwich, said Newcomb, “It’s never sitting. It’s a medium-rare, melt-in-your-mouth, roast beef sandwich.”

The Kelly’s franchise opportunity has been a long time coming. Throughout the years, Kelly’s has gained national attention on the Food Network’s show $40 a Day with Rachael Ray, a PBS Special called “Sandwiches You Will Like”, Robert B. Parker’s Wonderland by Ace Atkins, NBC’s three-time Emmy award-winning 30 Rock, and on the silver screen in Oscar-winning Good Will Hunting. In 2019, Thrillist named Kelly’s one of “11 New England Chains the Entire Country Needs” and Business Insider said travelers shouldn’t leave Boston without trying the roast beef sandwich at Kelly’s.

Including a franchise fee of $40,000, the total initial investment to open a Kelly’s franchise is $1.2-$2 million.

Founded in 1951 and franchising since 2020, Kelly’s Roast Beef is the inventor of the North Shore roast beef sandwich. Kelly’s roasts its beef in-house all through the day, serves everything fresh and made-to-order, and estimates serving a staggering one million sandwiches a year. The brand has become a symbol for Boston and has been referenced in pop culture, including in 30 Rock and Good Will Hunting. Today, there are five locations open in the Boston metropolitan area. For more information, visit https://kellysroastbeeffranchise.com.