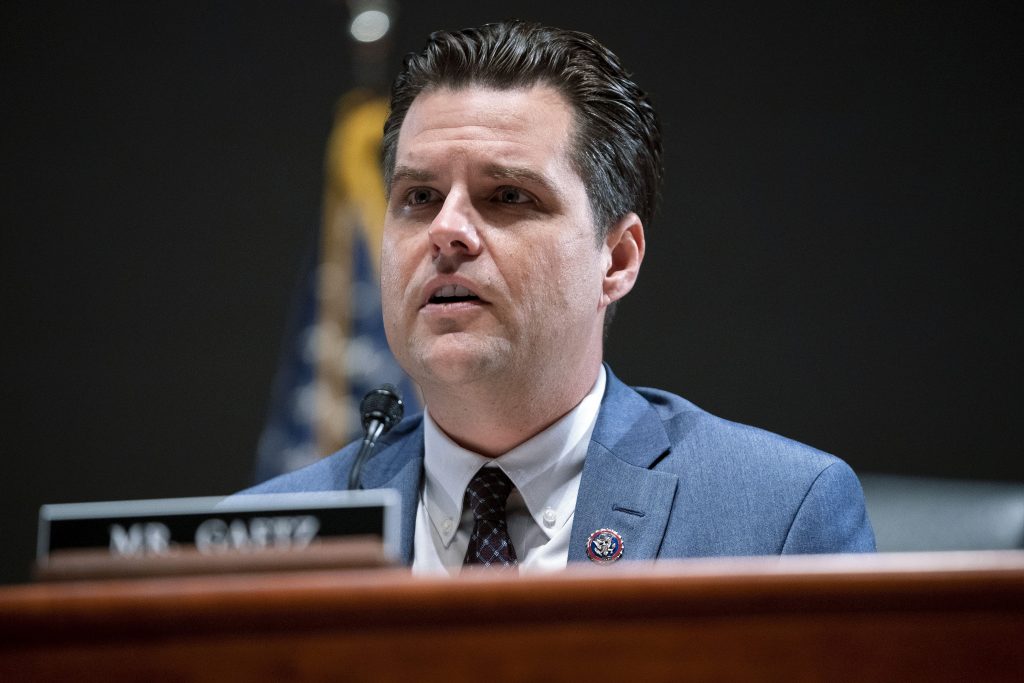 The Justice Department has added two top prosecutors from Washington to the child sex-trafficking investigation of Rep. Matt Gaetz, R-Fla., according to two people briefed on the matter, a sign of the complex and high-stakes nature of the inquiry into Gaetz, one of former President Donald Trump’s closest congressional allies.

The prosecutors — one a public corruption investigator with an expertise in child exploitation crimes, and the other a top leader of the public corruption unit — have been working on the Florida-based investigation for at least three months, the people said.

It is not unusual for prosecutors from the Justice Department in Washington to be added to local teams of federal investigators in high-profile cases that require a deep and specific expertise like sex crimes.

The Washington prosecutors have joined a group of federal authorities in Florida who have been investigating accusations of sex trafficking, fraud and corruption by several people connected to Republican politics in Florida, including Gaetz. Authorities have been examining whether Gaetz violated a federal child sex-trafficking law by providing goods or payments to a 17-year-old girl in exchange for sex.

Despite the wide-ranging nature of the case, only one person has been publicly charged: a former local tax collector named Joel Greenberg. He has pleaded guilty to sex-trafficking the same 17-year-old girl and other corruption and fraud charges. Greenberg agreed to cooperate with the government’s investigation, telling authorities that he saw Gaetz and others have sex with the girl.

In a sign of the ongoing nature of the investigation, the judge overseeing the case granted a motion Monday filed by Greenberg’s lawyer, Fritz Scheller, to have his client’s sentencing delayed until March.

One of the questions the prosecutors will have to wrestle with is whether to charge Gaetz with the same crime that Greenberg pleaded guilty to: sex-trafficking a minor. The law is broadly written and carries a minimum mandatory sentence of 10 years in prison.

Under President Joe Biden, the Justice Department has largely avoided having to directly take on Trump and his allies, leaving investigations of the previous administration to Congress and inspectors general. But moving forward with a case against Gaetz would directly pit the administration against one of Trump’s most vocal allies in a new way.

In August, the department indicted a Florida real estate developer on charges he tried to extort the Gaetz family of $25 million in exchange for a promise that he could get Gaetz a presidential pardon from Biden that would have ended the sex-trafficking investigation.

One of the Washington prosecutors is Todd Gee, deputy chief of the Public Integrity Section, which is part of the Justice Department’s Criminal Division. The section, which oversees public corruption cases, is involved in nearly all major criminal investigations into alleged misconduct by federal, state and local officials.

Gee served as one of the lead prosecutors in the successful conviction in 2020 of a former Navy commander at Guantánamo Bay, Cuba, who covered up a fight with a commissary worker who was found dead in the bay.

He also worked as the chief counsel to Democrats on the House Homeland Security Committee during the George W. Bush administration.

During a congressional hearing Thursday, Gaetz asked Attorney General Merrick Garland whether the department imposed any special vetting processes before it hired former lobbyists or former congressional staffers to work as federal prosecutors, specifically in the Public Integrity Section.

“Is there any prohibition against people who’ve been lobbyists, partisan committee staff or political consultants actually going in and serving in the Public Integrity Section, or is that allowed?” Gaetz asked. He later added, “If someone has been a political operative, to then put them in charge of election crimes, it’s kind of like having the fox guard the henhouse.”

Garland noted that it was against Justice Department policy to consider a person’s political affiliations or views during the hiring process for career civil servants.

Gaetz asked Garland for a list of former lobbyists, former political consultants and former congressional staffers who now worked in the Public Integrity Section. Garland said that he did not intend to create a list of career officials and their previous jobs.

The Justice Department has a history of treating public corruption cases involving high-profile political figures with special care so as to guard against the appearance of politically motivated prosecutions or other improprieties.

When prosecutors decline to bring charges in these matters, they often write detailed memos to defend their decisions should they be questioned by current and future politically appointed department leaders or Congress. In investigations that receive extensive media attention but ultimately do not result in charges, the department often puts out a short statement announcing the conclusion of the inquiry.

Sex-trafficking cases come with their own complexities that involve issues typically not associated with traditional fraud and corruption investigations. One area of expertise that the Washington prosecutors are bringing to the Gaetz case is dealing with children who have been exploited but may not see themselves as having been victimized, which can complicate trials if they are called as witnesses.

Legally, the victim’s state of mind is not a factor that juries should consider when determining whether the law was violated, according to Amanda Kramer, a white-collar defense lawyer at Covington and Burling and former federal prosecutor in Manhattan who supervised sex-trafficking cases for a decade.

Technically, the government needs only to prove that the child was underage when the sexual activity occurred and that the child received something of value in exchange for it.

But, Kramer said, the defense could try to use such witness testimony to confuse the jury or sour the legitimacy of the prosecution, although many judges would most likely shut down such a line of questioning.

“It’s not uncommon for teens who have been trafficked to view themselves as willing participants and not as victims, often as a result of psychological manipulation by their traffickers,” Kramer said. “That’s one of many dynamics that make sex-trafficking cases challenging for prosecutors, but it’s far from fatal to the case.”