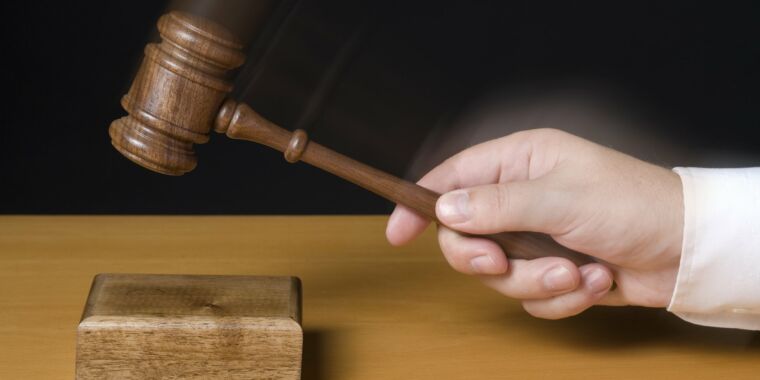 A federal judge has blocked Florida’s new social media law because it violates the First Amendment rights of tech companies that moderate user content on their online platforms. The state law would make it illegal for large social media sites like Facebook and Twitter to ban politicians and impose other restrictions on the tech companies, but the judge’s order means it cannot be enforced while an industry lawsuit against Florida is pending. The law would have taken effect today if not for the injunction.

The preliminary-injunction order issued by US District Judge Robert Hinkle yesterday called Florida’s law “an instance of burning the house to roast a pig.”

“If a preliminary injunction is not issued, the plaintiffs’ members will sometimes be compelled to speak and will sometimes be forbidden from speaking, all in violation of their editorial judgment and the First Amendment,” Hinkle wrote. The tech companies would sometimes be forbidden from speaking because the Florida law’s definition of censorship includes not only deleting content, but also “post[ing] an addendum to any content or material posted by a user.”

For several reasons outlined by the judge, the trade groups that sued Florida “are likely to prevail on the merits of their claim that these statutes violate the First Amendment,” Hinkle wrote. “There is nothing that could be severed and survive.” The judge’s order “preliminarily enjoins enforcement of the parts of the legislation that are preempted or violate the First Amendment,” he wrote.

Trade groups representing Facebook, Twitter, and other major websites quickly sued Florida after the state enacted its law in May. The lawsuit was filed in US District Court for the Northern District of Florida.

Florida Gov. Ron DeSantis claimed the Sunshine State’s law would stop the “censorship” of conservatives on social media websites. The law’s prohibition on kicking politicians off social media platforms would have imposed fines of up to $250,000 per day on social media companies that ban candidates for elected office.

The law also said that online platforms “may not take any action to censor, deplatform, or shadow ban a journalistic enterprise based on the content of its publication or broadcast,” unless the content is “obscene.” Another provision would give Floridians the right to sue Big Tech companies over content-moderation decisions.

The law carved out an unusual exemption for tech companies that happen to also own large theme parks, which would benefit Disney and Comcast, the latter of which owns NBCUniversal including Universal Theme Parks. As Big Tech trade groups pointed out in their lawsuit, “the exemption was added with the undisguised objective of ensuring that certain companies with big economic footprints in Florida—like Disney—are not ‘caught up in this.'”

Judge details everything wrong with the law

Hinkle’s order said that Florida’s law “compels providers to host speech that violates their standards—speech they otherwise would not host—and forbids providers from speaking as they otherwise would. The Governor’s signing statement and numerous remarks of legislators show rather clearly that the legislation is viewpoint-based.”

In addition to violating the First Amendment, Hinkle found that the Florida law is preempted by Section 230 of the Communications Decency Act, which gives online platforms protection from lawsuits over how they moderate user-submitted content.

“[D]eplatforming a candidate restricts access to material the platform plainly considers objectionable within the meaning of [Section 230],” Hinkle wrote. “If this is done in good faith—as can happen—the Florida provision imposing daily fines is preempted by § 230(e)(3). Good faith, for this purpose, is determined by federal law, not state law. Removing a candidate from a platform based on otherwise-legitimate, generally applicable standards—those applicable to individuals who are not candidates—easily meets the good-faith requirement. Indeed, even a mistaken application of standards may occur in good faith.”

Section 230 also preempts the parts of the Florida law “that purport to impose liability for other decisions to remove or restrict access to content” by creating a private right of action against social media companies, Hinkle wrote.

Theme-park exemption laughed out of court

During oral arguments, Florida’s lawyers were unable to mount a convincing defense of the theme-park exemption. Hinkle said the legal standard of “strict scrutiny” must apply to the law even though the state claimed the more permissive “intermediate scrutiny” standard should be used. The law would apparently fail under both tests, however.

“[I]n any event, when asked at oral argument, the State could suggest no theory under which the exclusion could survive even intermediate scrutiny,” Hinkle wrote. Further, “[d]espite the obvious constitutional issue posed by the exclusion, the Legislature adopted it, apparently unwilling to subject favored Florida businesses to the statutes’ onerous regulatory burdens,” he wrote.

State has “no argument” that could pass strict scrutiny

Hinkle then explained why the law doesn’t pass strict scrutiny:

To survive strict scrutiny, an infringement on speech must further a compelling state interest and must be narrowly tailored to achieve that interest. These statutes come nowhere close. Indeed, the State has advanced no argument suggesting the statutes can survive strict scrutiny. They plainly cannot. First, leveling the playing field—promoting speech on one side of an issue or restricting speech on the other—is not a legitimate state interest. Whatever might be said of any other allegedly compelling state interest, these statutes are not narrowly tailored. Like prior First Amendment restrictions, this is an instance of burning the house to roast a pig.

The law is subject to strict scrutiny because it was enacted with a “viewpoint-based motivation.” The plaintiffs asserted “with substantial factual support” that the law was motivated by “hostility to the social media platforms’ perceived liberal viewpoint,” Hinkle wrote.

Thus, for example, the Governor’s signing statement quoted the bill’s sponsor in the House of Representatives: “Day in and day out, our freedom of speech as conservatives is under attack by the ‘big tech’ oligarchs in Silicon Valley. But in Florida, we said this egregious example of biased silencing will not be tolerated.” Similarly, in another passage quoted by the Governor, the Lieutenant Governor said, “What we’ve been seeing across the U.S. is an effort to silence, intimidate, and wipe out dissenting voices by the leftist media and big corporations… Thankfully in Florida we have a Governor that fights against big tech oligarchs that contrive, manipulate, and censor if you voice views that run contrary to their radical leftist narrative.”

Additional factors make it clear the law is content-based, including one provision that “applies to deplatforming a candidate, not someone else,” and one that “imposes restrictions applicable only to material posted ‘by or about a candidate,'” Hinkle wrote. The state also did not provide a good defense “for imposing these restrictions only on the largest providers… even without evidence of an improper motive, the application of these requirements to only a small subset of social media entities would be sufficient, standing alone, to subject these statutes to strict scrutiny,” he wrote.

The law’s provisions on moderation of journalism seemed to strike the judge as nonsensical. “The statute defines ‘journalistic enterprise’ in a manner that covers many entities that are engaged in journalism but many that are not; any retailer who does business in Florida, has a website of substantial size, and fills 100,000 online orders per month apparently qualifies,” he wrote. “A small newspaper, in contrast—one with fewer than 50,000 paid subscribers and fewer than 100,000 active monthly users—does not qualify, no matter how high its journalistic standards.”

Hinkle summarized his findings in the order’s conclusion:

The legislation now at issue was an effort to rein in social-media providers deemed too large and too liberal. Balancing the exchange of ideas among private speakers is not a legitimate governmental interest. And even aside from the actual motivation for this legislation, it is plainly content-based and subject to strict scrutiny. It is also subject to strict scrutiny because it discriminates on its face among otherwise-identical speakers: between social-media providers that do or do not meet the legislation’s size requirements and are or are not under common ownership with a theme park. The legislation does not survive strict scrutiny. Parts also are expressly preempted by federal law.

Hinkle also found that the Florida law “is riddled with imprecision and ambiguity” but wrote that “[t]his order need not and does not decide whether vagueness would provide an independent ground for a preliminary injunction.”

The Computer & Communications Industry Association, one of the trade groups that sued Florida, said the law would have “empower[ed] bad actors to bring abusive lawsuits against digital services trying to protect users,” putting US-based “Internet users at greater risk to foreign disinformation and propaganda and extremism, predators and fraudsters, and viruses and malware, among other threats.”

“This decision upholding the Constitution and federal law is encouraging, and reaffirms what we have been saying: Florida’s statute is an extraordinary overreach, designed to penalize private businesses for their perceived lack of deference to the Government’s political ideology,” CCIA President Matt Schruers said. “The court’s ruling is a win for internet users and the First Amendment.”