Josh Gottheimer Tried to Derail the Democratic Agenda. The Press Rewarded Him. 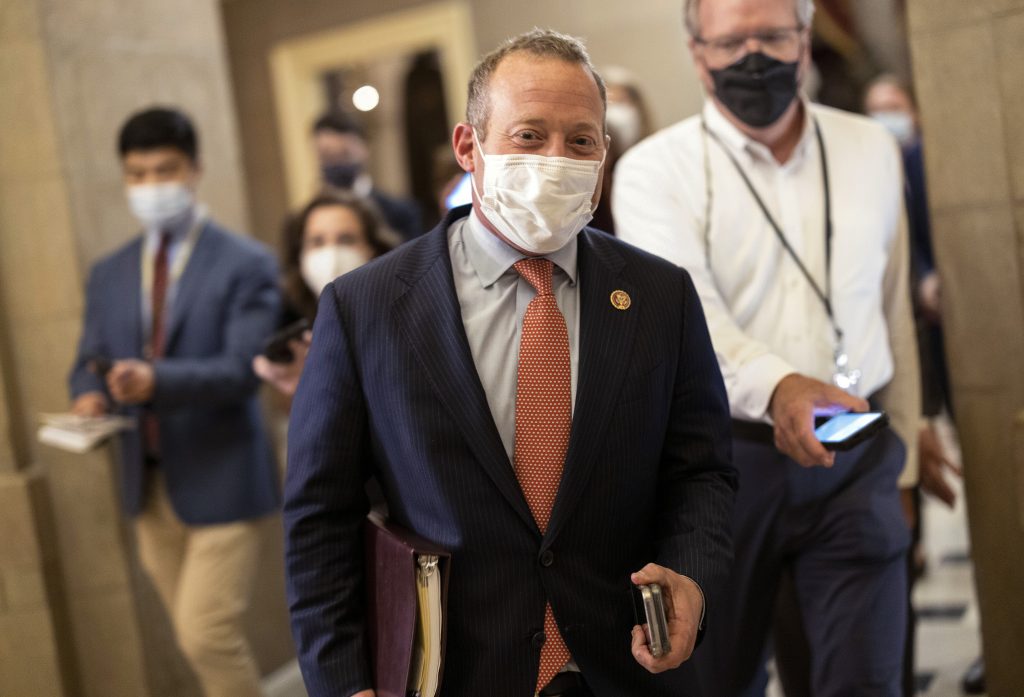 For 10 days, nine opportunistic House Democrats puffed out their chests and tried to derail not only their party’s agenda, but its best chance of passing a transformative budget in decades. They claimed, again and again, to be driven by conviction. New Jersey Representative Josh Gottheimer told The Washington Post that he and his confederates were “holding strong to our principled beliefs.” Another, Florida Democrat Stephanie Murphy, insisted that she was being “constructive” and was willing to “make principled compromises,” but that she could not “in good conscience” vote on the party’s budget until the infrastructure bill that passed the Senate last month came up for a vote in the House.

What, exactly, was this matter of principle and conscience? The rationale, repeated again and again, was simple: The country’s infrastructure was decaying—better not wait another day to start buffing it up! Or to paraphrase Helen Lovejoy, “Won’t someone please think of the roads and bridges?” It was an odd complaint. No one was suggesting that the infrastructure package would be delayed until, say, the end of the year—just until the budget deal was completed in tandem.

The Democrats’ two-track approach was intended to keep everyone happy. For progressives to get the big budget outlays they wanted, they had to vote for a bipartisan infrastructure bill; for moderates and conservatives to get their bipartisan infrastructure bill, they had to return the favor. With Democratic senators unwilling to part with the filibuster, and thus unwilling to send any other bills to President Joe Biden for his signature, these measures represent the entirety of the Biden administration’s legislative agenda—and the crux of his party’s midterm election argument.

But much of the mainstream press has simply accepted the rationale of the moderate rebels in the House Democratic caucus who have decided to hold their party’s ambitions hostage: They simply wanted the bulldozers to start revving their engines. But there was never any genuine principle at stake. Gottheimer and his colleagues wanted to disrupt the two-tier strategy, giving themselves the upper hand when it came to negotiating and undoubtedly whittling down the budget—particularly things like tax increases for the rich—sandbagging the House’s progressive wing along the way.

In the end, Gottheimer and his merry band of mutineers didn’t get much from their lonely stand. On Tuesday, Nancy Pelosi announced that House Democrats had agreed to pass the infrastructure bill by September 27, giving the party five weeks to pass a budget reconciliation package, an infrastructure bill, and—oh yeah—raise the debt ceiling as well. The budget will almost certainly decrease from $3.5 trillion to appease Senate moderates. Gottheimer may have hoped to gain some additional leverage or increase the size of his mod squad, but that hasn’t panned out: Everyone in the House seems to hate him, even people who were once sympathetic to his approach. “Are you just going to dig your heels in and say, ‘I’m not doing anything’?” Susan Wild, a House Democratic facing a tough reelection campaign, told The Washington Post. “That’s just stupid.”

But Gottheimer succeeded in one way. As New York’s Jonathan Chait wrote, “The primary success of Gottheimer’s rebellion has been to seize for himself and his band the coveted ‘moderate’ label.” The New Jersey Democrat also raised his profile: He wasn’t well known in July, and now he is, relatively speaking. But there is nothing “moderate” about trying to scuttle a budget deal so you can undermine potential tax increases. And yet, again and again, that’s how Gottheimer and his crew have been referred to in the press. The Post, for instance, observed that Tuesday’s deal came after “skeptical centrists” stood up because they “feared the infrastructure bill would have been mired in significant setbacks.” A “big if true” moment if there ever was one!

Ultimately, Gottheimer’s rebellion may have been a clever bit of branding, one that may or may not pay dividends back home. (Gottheimer represents a swing district; several of his allies do not.) All it cost was derailing the Democratic agenda for nearly two weeks—and doing so during the Biden administration’s lowest ebb, adding to the perception that the party was losing control. All the while, their objections were always steel-manned by the press, who depicted them as moderates, centrists, and, above all, pragmatists who just want to get America building again.

Those few who saw through this ruse labeled the nine House Democrats the “Suicide Squad” or the “Sabotage Squad,” a play on the “Squad” label that has been festooned on House progressives, including Alexandria Ocasio-Cortez, Rashida Tlaib, Ilhan Omar, and Ayanna Pressley. After the Senate passed a bipartisan infrastructure bill, many looked to these progressives to be the ones to rebel and threaten to derail the deals in order to ensure that a large reconciliation package was passed. Had they done so, the press likely wouldn’t have lionized them to the degree that Gottheimer’s rogues were for their effort. It’s not hard to imagine the scorn that would have been heaped on them for tying up the Democrats’ agenda on behalf of left-wing values not shared by many in the party—never mind, of course, that much of the budget reconciliation bill is popular with voters in both parties. The progressives, however, have instead stood with the team.

Gottheimer’s rebellion was divisive and unpopular and actively damaged the Democrats’ ability to govern at a time of extraordinary vulnerability. It was also futile and stupid and accomplished almost nothing, aside from wasting valuable time at a crucial juncture. Democrats are hoping that a midterm “messaging blitz,” highlighting the “hugely popular” parts of the Biden agenda, will help Democrats retain their legislative majorities. But the things that the Gottheimer cabal sought to achieve, such as blocking tax increases on the wealthy and on corporations, aren’t popular with the public. And beyond general deficit hackery, the group never articulated a substantive reason to complain about the budget bill or Pelosi’s plans to shepherd these deals to Biden’s desk. There are a lot of words that fittingly describe Gottheimer and his fellows. “Moderate”—one of the most popular appellations the media can bestow on a politician—is not among them.