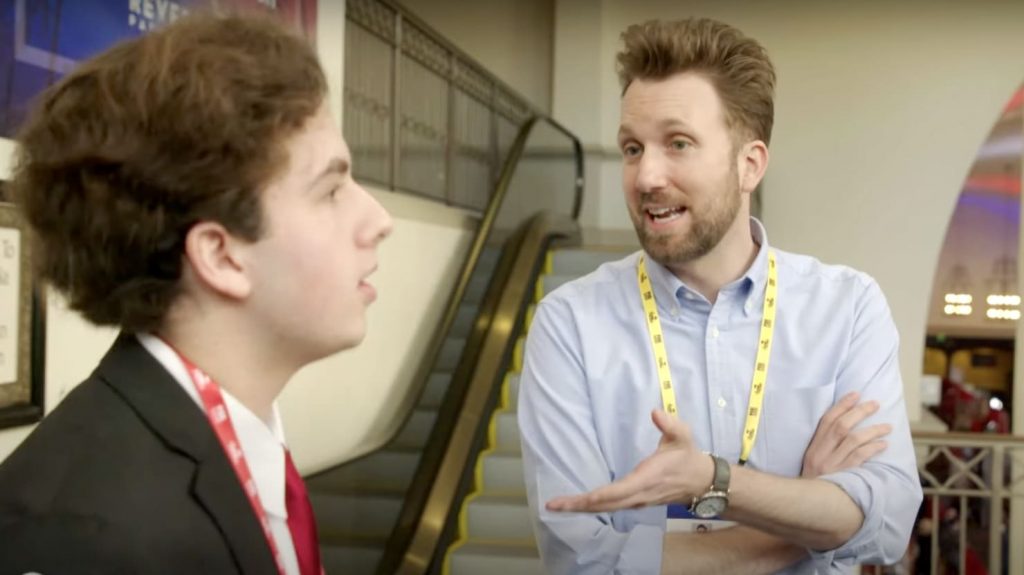 For his latest segment exposing card-carrying members of the MAGA cult, The Daily Show’s Jordan Klepper ventured to this year’s CPAC in Orlando, Florida, where former President Donald Trump still appeared to have conservatives in a stranglehold.

At the conference, Rep. Marjorie Taylor Greene (R-GA) claimed the election was “stolen”; MyPillow conspiracy theorist Mike Lindell had a meltdown after being asked a simple question by a reporter; and Trump called Russian President Vladimir Putin a “genius” for invading Ukraine. But Klepper was more interested in those who worship the former reality-show host.

“I like how he’s funny,” one younger-looking fellow in a blazer said. “The 2015 debate, he was like… ‘Little Marco,’ ‘You’re fat,’ ‘You’re stupid.’ I just loved it. I felt like his personality was my personality.”

“He had a 15-year-old’s sense of humor,” replied Klepper.

“Exactly. But that is… I loved that,” the guy said.

“So you wanted a 15-year-old as president and you got one,” added Klepper.

“A hundred percent,” he responded.

Another woman alleged that the Democratic Party “want to destroy the neutral [sic] family,” claiming that “you can’t use the words ‘mother,’ ‘father.’”

When Klepper asked the woman, “Am I gonna get in trouble if I use the word ‘mother’ or ‘father?’” she explained, “They’ll try to correct you.”

After observing a Trump sex swing and a gold statue of the ex-president, Klepper encountered an animated guy in a white “Make America Great Again” hat and a “Biden Loves Minors” T-shirt who said he’s worried about schools “indoctrinating” kids into being transgender by placing the transgender pride flag in classrooms. He went on to say that the “colors” of the flag could be confusing to young kids, before admitting he had no idea what the colors of the flag are.

Then a man in a red MAGA hat was pressed by Klepper: “When [Trump] called Vladimir Putin a ‘genius,’ was that him being tough?”

“I think he has a way of playing with words… and then he gets the media riled up,” the guy rather unconvincingly replied.

Toward the end of the segment, Klepper found himself fascinated by CPAC attendees’ obsession with Hungary, which has moved far to the right under leader Viktor Orban. So Klepper traveled to Budapest to found out what the deal is.

For that, you’ll have to wait till his special “Hungary for Democracy,” airing April 21 on Comedy Central.

For more, listen to The Daily Show’s Jordan Klepper on The Last Laugh podcast.