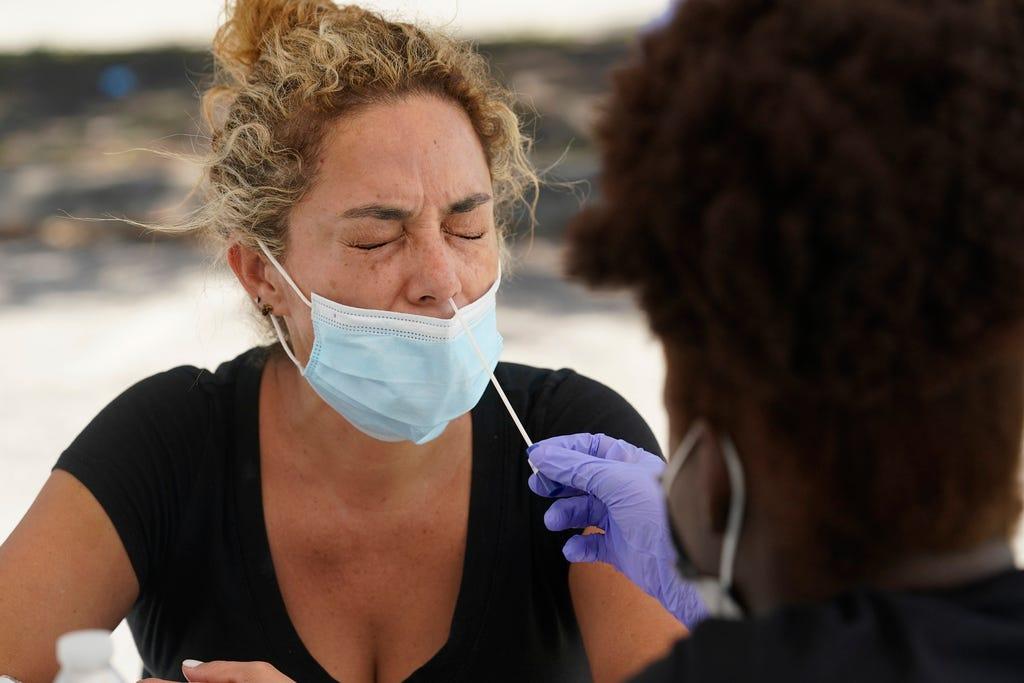 The U.S. likely won’t see the lockdowns that plagued the nation last year despite surging infections, but “things are going to get worse,” Dr. Anthony Fauci warned Sunday.

Fauci, making the rounds on morning news shows, noted that half of Americans have been vaccinated. That, he said, should be enough people to avoid drastic measures. But not enough to crush the outbreak.

“We are looking, not I believe to lockdowns, but to some pain and suffering in the future,” Fauci said on ABC’s “This Week.”

The U.S. reported more than 1.3 million new infections in July, more than triple the number from June. Fauci acknowledged that some breakthrough infections are occurring among the vaccinated. No vaccine is 100% effective, he noted. But he stressed the Biden administration’s recurring theme that vaccinated people who do become infected are far less likely to become seriously ill than unvaccinated people who become infected.

“From the standpoint of illness, hospitalization, suffering and death, the unvaccinated are much more vulnerable,” Fauci said. “The unvaccinated, by not being vaccinated, are allowing the propagation and the spread of the outbreak.”

The CDC has brought back guidelines recommending masks for vaccinated individuals in areas of substantial spread of the virus.

“That has much more to do with transmission,” Fauci said of the new guidelines. “You want them to wear a mask, so that if in fact they do get infected, they don’t spread it to vulnerable people, perhaps in their own household, children or people with underlying conditions.”

The director of the National Institutes of Health said Sunday that federal guidance urging vaccinated people to wear masks indoors in communities of high COVID-19 spread is aimed at mostly protecting the unvaccinated and immunocompromised.

Dr. Francis Collins, head of the NIH, urged Americans to wear masks but stressed that they’re no substitute for getting vaccinated.

The virus is “having a pretty big party in the middle of the country,” Collins said.

The return of some local mask mandates in schools and elsewhere is drawing resistance similar to what vaccine mandates have drawn. In Texas, where daily new infections have tripled in the last two weeks, Gov. Greg Abbott has prohibited local governments and state agencies from mandating vaccines or masks. Florida Gov. Ron DeSantis, despite experiencing record-breaking infection numbers in his state, also has imposed limits on local mask rules.

Both governors say protection against the virus should be a matter of personal responsibility, not government intervention.

“We have a lot of push from the CDC and others to make every single person, kids and (school) staff have to wear masks all day,” DeSantis said. “That would be a huge mistake.”

The Biden administration’s new policy requiring federal workers to wear masks has drawn some blowback from unions, including those that encourage their rank and file to wear masks.

“Our union plans to negotiate the particulars before any new policy is implemented,” tweeted the American Federation of Government Employees, which represents 700,000 government workers.

Also in the news:

►Hospital and health officials across Texas are pleading for residents to get vaccinated amid a dramatic increase in COVID patients that is straining an already decimated health care system. “Nearly every COVID patient admission is completely preventable,” said Dr. Bryan Alsip, chief medical officer at University Health System in San Antonio. “Staff witness this every day and it’s very, very frustrating.”

►The Lazio region of Italy, which includes Rome, says its website has been hacked, making it temporarily impossible for residents to sign up for vaccinations. About 70% of Lazio residents 12 years or older and eligible for the vaccine have been vaccinated.

►Despite every other U.S. swimmer wearing a mask during interviews with journalists, the U.S. Olympic and Paralympic Committee has allowed unvaccinated swimmer Michael Andrew to not wear a mask. Citing the Tokyo playbook of COVID-19 protocols released in June, the USOPC said athletes can remove their masks for interviews.

📈Today’s numbers: The U.S. has had more than 34.9 million confirmed COVID-19 cases and more than 613,100 deaths, according to Johns Hopkins University data. The global totals: More than 198.1 million cases and 4.2 million deaths. More than 164.7 million Americans – 49.6% of the population – have been fully vaccinated, according to the CDC.

📘What we’re reading: Evidence is mounting about the dangers of the delta variant and how mask-wearing is essential to bring it under control, according to a government slide show dated Thursday. The delta variant is considered far more contagious than other variants of the virus. Read more.

Keep refreshing this page for the latest news. Want more? Sign up for USA TODAY’s Coronavirus Watch newsletter to receive updates directly to your inbox and join our Facebook group.

Another day, another dark record as virus surge sweeps over Florida

A day after Florida recorded the most new daily cases since the start of the pandemic, the state on Sunday broke its record for current hospitalizations. The Sunshine State had 10,207 people hospitalized with confirmed COVID-19 cases, according to data reported to the U.S. Department of Health & Human Services. The previous record of 10,170 hospitalizations was from July 23, 2020 – more than a half-year before vaccinations started becoming widespread – according to the Florida Hospital Association. Florida leads the nation in per capita hospitalizations for COVID-19.

Still, Florida Gov. Ron DeSantis has resisted masking orders and imposed limitations on local officials’ ability to require masks. He also signed an executive order Friday to issue emergency rules for “protecting the rights of parents,” making face masks optional across the state in schools and leaving it up to parents.

The boom in gun sales during the pandemic has fueled a shortage of ammunition for law enforcement agencies, people seeking personal protection, recreational shooters and hunters. Manufacturers say they’re producing as much ammunition as they can, but many gun store shelves are empty and prices keep rising. The pandemic, social unrest and a rise in violent crime have prompted millions to buy guns for protection or to take up shooting for sport, experts say.

Officer Larry Hadfield, a spokesman for the Las Vegas Metropolitan Police Department, said his department also has been affected by the shortage. “We have made efforts to conserve ammunition when possible,” he said.

Tenants saddled with months of back rent are no longer protected by the federal eviction moratorium. The Biden administration let the moratorium expire Saturday night, saying Congress should take legislative action to protect renters while urging for the distribution of billions of dollars of relief to help those facing the loss of their homes. The administration has stressed that it wanted to extend the moratorium, but that its hands were tied after the U.S. Supreme Court signaled in June that it couldn’t be extended beyond the end of July without congressional action.

House lawmakers on Friday attempted but failed to pass a bill to extend the moratorium even for a few months. Some Democratic lawmakers had wanted it extended until the end of the year.

This article originally appeared on USA TODAY: COVID cases surging and ‘things are going to get worse,’ Fauci says