I Know What It’s Like to Be a Florida Teen Who Can’t Say Gay. I Was One 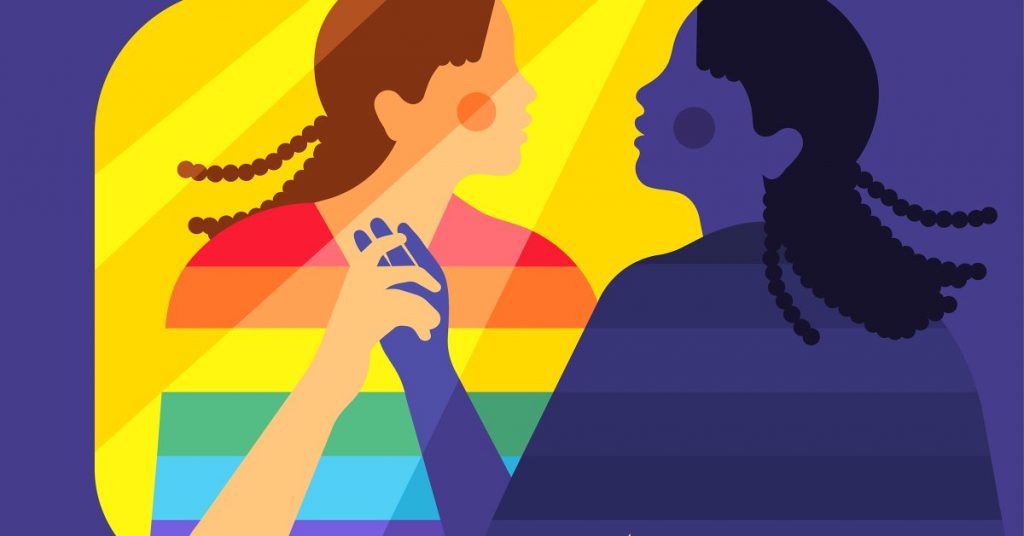 Growing up, I never kept a diary. There were no journals hidden beneath my twin mattress, no spiral-bound collection of ruffled notebooks stuffed with private confidences. I was a voracious reader who devoured books in secret, in defiance of my strict evangelical parents, but when it came to my personal feelings, I allowed nothing of myself to migrate onto the page. Writing felt treacherous; a way to accidentally reveal too much. The few times that I did manage to pen any of my feelings, I immediately shredded everything, crumpled papers stuffed at the bottom of the garbage can, hidden beneath scraps of the previous night’s dinner.

Those scribblings were too unruly, I thought at the time, unwilling to let any of it live outside the privacy of my head. Regardless, my hopes and fears sometimes erupted from the watched pot of my brain, boiling over to reveal truths I was desperate to hide. A swirl of images spit and hissed steam beneath the lid: friends changing out of wet bathing suits after a pool party, the heart-shaped sweat mark on a girl’s back during gym class on an especially sweltering Central Florida afternoon, the sun tracing shiny golden tinsel into a woman’s plaited hair. The memories flickered neon red at the edges, warning of danger. There was something unacceptable about them. Something scary.

I know now why I couldn’t write them down. My words were too gay.

As an adult, I can see that the smothering of the queerness that lived inside me led to long, tumultuous years of depression and misery. So much of that overwhelming despair could have been abated by the simple act of voicing the unsaid thing. All those times I cried myself sick and prayed for death, I needed the words. Whenever I sliced at my skin, or when I pulled the hair from my head in order to feel something other than the self-loathing of my secret burden, I needed that frustratingly inaccessible language. If only I were allowed a sentence. Even a word. If I could tell someone, anyone, without fear of repercussion, then I’d have found relief. I’m gay, I would have said. And the immediate follow-up: I’m gay and I’m scared.

Read More: After Fleeing Ukraine, LGBTQ Refugees Search for Safety in Countries Hostile to Their Rights

It was fear that kept me silent. Because I knew that the things I felt were not acceptable. Not to my parents or my friends, and certainly not in Orlando. I found places online where I could hide, small hubs of support. But there was none of that relief in high school in the late ’90s. The few teens I knew who had the label “gay” attached to them suffered through continuous shame and abuse. Most of them fled after graduating, out of Central Florida to anywhere with an existing LGBTQ+ community. Young people, already faced with the stress and anxiety of coming out, knew that the additional obstacles placed in front of them by the edicts of our conservative state meant they wouldn’t be able to thrive. It took years of stewing in anguish for me to finally come out. It took finding the words. Those words led me to queer community, allowing me to understand that I wasn’t alone. Only then did the fear begin to dissipate.

It’s been more than 20 years since I graduated high school, yet the repression of LGBTQ+ youth in Florida remains much the same. With the passage of the Parental Rights in Education bill—more commonly (and accurately) called the “Don’t Say Gay” bill—which bans public schools from teaching kindergartners through third-graders about sexual orientation or gender identity or “in a manner that is not age-appropriate or developmentally appropriate for students” and allows parents to sue the school districts for violations—the state is trapped in the same cycle of wordlessness, with queer and trans people unable to speak the truth of our lives. It is a blanket meant not to comfort, but to stifle and to smother. It wants to eradicate us by denying our voices. The young people affected by this are in the same position I was in as a teenager. They are left with nowhere to turn, denied the language necessary to their continued survival and growth.

Though Central Florida is home to many queer people, there are only a handful of LGBTQ+-designated establishments. Last year the nonprofit Come Out with Pride in Orlando held one of its biggest festivals yet, but the community struggles to find space and funding and room to grow. We’re offered Gay Days, Pride-themed Mickey Mouse ears, a parade float. We’re told that the little we get has to be enough to last, because we won’t be given more. The new legislation tells educators not to say gay, not to acknowledge the lived experiences of our queer and trans children, but those people who work to silence us will offer up their thoughts and prayers after a mass shooting kills and injures dozens at one of our only gay nightclubs.

Disney CEO Bob Chapek initially refused to condemn the bill, claiming “our diverse stories are our corporate statements,” and yet the corporation has spoken in other ways about its priorities—donating to some of the bill’s backers, an action that would harm its own extensive pool of LGBTQ+ employees. Backlash from staff was immediate, and many went online to voice their anger at the decision. Chapek reached out to Governor Ron DeSantis to express “disappointment and concern” over the bill only after a significant amount of pressure was applied from the community. He later apologized for his failure to speak out and said Disney would pause political donations in Florida. Meanwhile, employees of Pixar, a subsidiary of Disney, have accused the company of censoring same-sex affection in its movies.

It is a disconnect of morality; a space where the people who most need assistance are shunted to the side, left voiceless. We have been provided conflicting stories—you are accepted and loved, but you cannot speak about it, ever—and are expected to believe that these narratives can exist simultaneously.

We know that they cannot.

There is no hope in trusting corporations who would take our money and give us rainbow-hued T-shirts instead of investing in our community. It is one thing to tweet the word gay in a measure of actionless solidarity; it is another thing entirely to put in the work of supporting queer communities. It’s those small spaces, the underfunded nonprofits in Orlando, that are doing the real, lasting labor. Zebra Coalition in Central Florida has worked tirelessly for years to help LGBTQ+ youth, working to combat teen homelessness and providing crucial access to mental-health care and education. They do this all on a shoestring budget, while Disney, with its billions, has made it abundantly clear that we’re supposed to take the facsimile of a possibly queer cartoon character and feel supported.

As a writer, I think about communication a lot. How we think and speak and act. I dig my fingers into the meat of text and massage it, poking at the gristle and fat, seeking to somehow tenderize it. To be tender, I think, means to be vulnerable. And there is wild vulnerability in speaking the truth, regardless of our fear; a blessing to open our mouths and speak the hard thing into existence. I think back on the closeted lesbian teenager I used to be, crying and frightened, alone with my silence, and I want tenderness for her. I want it for every queer and trans youth. I want it for Florida, my community; my home. To love a place that refuses to love you back is a heavy burden to bear. But this place is mine, which means it is queer too. How could it not be? I have helped make it. Our LGBTQ+ community has shaped it.

If I say the words aloud, I am doing the harder work. The tender, vulnerable work. The loving work. I’m gay, I say, but now I follow it with something that’s not fear. It’s outrage. It’s a call to action, one that means throwing out the disingenuous narratives that have made Florida complicit in denying our voices. We’re gay and we’re still here, Florida. Even if you choose not to hear us.

If you or someone you know is struggling with self-harm, text HOME to 741741 to reach the Crisis Text Line. In emergencies, call 911, or seek care from a local hospital or mental health provider.