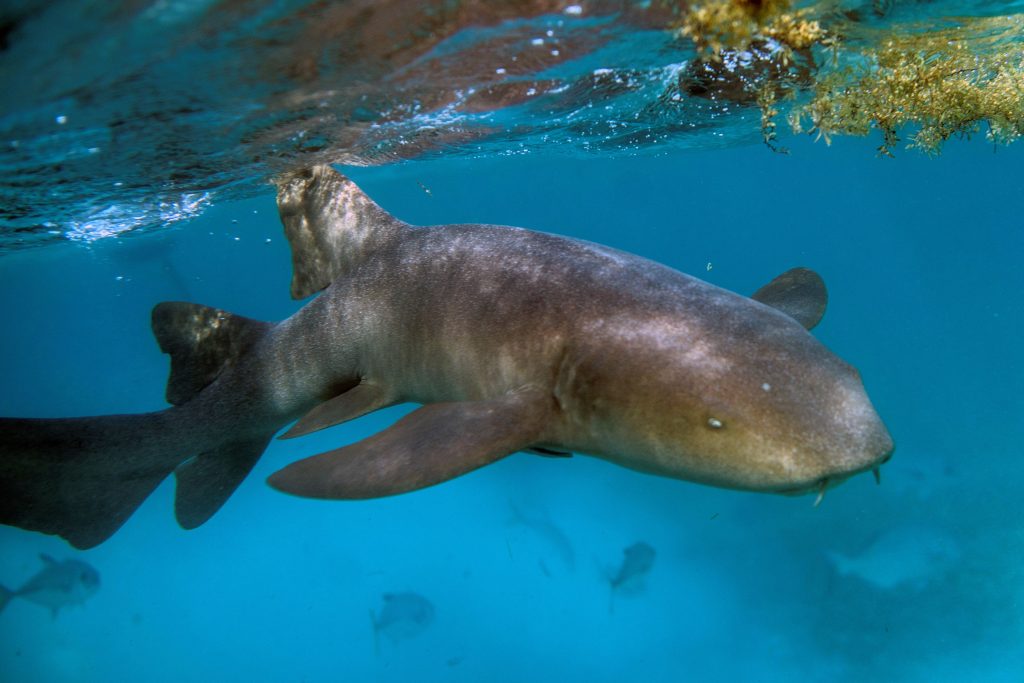 A nurse shark on a coral reef. (PEDRO PARDO/AFP via Getty Images)

Want the best of VICE News straight to your inbox? Sign up here.

Hundreds of sharks swarmed into people’s backyard canals in Longboat Key, Florida, this week to avoid a toxic algae bloom in the ocean known as “red tide,” which irritates the animals.

“You literally could have walked across the canal on the backs of sharks,” Longboat Key resident Janelle Branower told local station WFLA. “That’s how many there were.”

Bonnethead, black tip, nurse, and lemon sharks have all been spotted in Florida canals over the past month during the red tide, an overgrowth of microorganisms that can turn ocean water tangerine red, deplete oxygen levels in the water, and concentrate toxins in the water. The changes in the water can severely harm marine life, especially sharks, and cause congestion and rashes in humans—or even more serious reactions like paralysis and death—especially when consuming seafood.

In Florida, the blooms happen annually, but they’re getting worse every year.

“Red tide is getting much worse, and it’s largely because of land-based toxins, primarily agricultural runoff and fertilizer runoff from lawns going into sewage systems, septic tanks, things like that,” said Larry Brand, a professor who specializes in phytoplankton at the University of Miami Rosenstiel School of Marine and Atmospheric Science. “And as a result of climate change, we get more intense rain storms, and that means more of this runoff from land.”

In fact, few red tides, if any, bloom during the dry season.

Troves of dead fish have been washing up on beaches as oxygen levels plummet in the water and toxins build up. That leads to a chain reaction in Florida’s marine food web that harms species as large as sharks and as small as sea grass. But experts say sharks are particularly sensitive to the algae.

“You saw fins at first just like popping up,” Longboat Key resident John Wagman told the WFLA. “And then you would look down the canal and with a little bit of the sun, you just saw more and more and you were like ‘Oh, that is not good.’”

Brand said he and his colleagues suspect it’s because of evolutionary divergence from bony fish; sharks have cartilage. That breakaway made it possible for sharks to survive blooms like red tide but still be sensitive to it. Instead of outright dying, sharks just want to get away.

“Sharks diverged from bony fish a long, long time ago,” Brand said. “I suspect that, basically, sharks have different types of neurons than these bony fish. That might be why they’re less susceptible.”

Sharks encroaching on human territory is also a key indicator of habitat destruction, according to marine biologist and scuba diver Hailey Vaughan, who grew up in Tampa and now works at the Mote Marine Lab in Sarasota. She said she’s personally seen the red tide intensify. Dead fish washing up on the beaches are now being bulldozed and scooped up by heavy machinery so they don’t spread the algae toxins further.

“There’s no more time for ‘out of sight out of mind,’” Vaughan said. “The proof is now washing up in our backyards.”

Humans are hurting, too. Not only can the algae’s toxins be passed to humans through eating fish, clams, and other seafood, but tourism is declining.

“Charter captains are out of work, restaurants are empty due to the stench, hotels are seeing more vacancies because no one wants to be around the water,” Vaughan told VICE News. “I think red tide should be a wake up call to tell the blindfolded policy makers that the way we treat the environment does matter, it does affect us, and it needs more attention.”