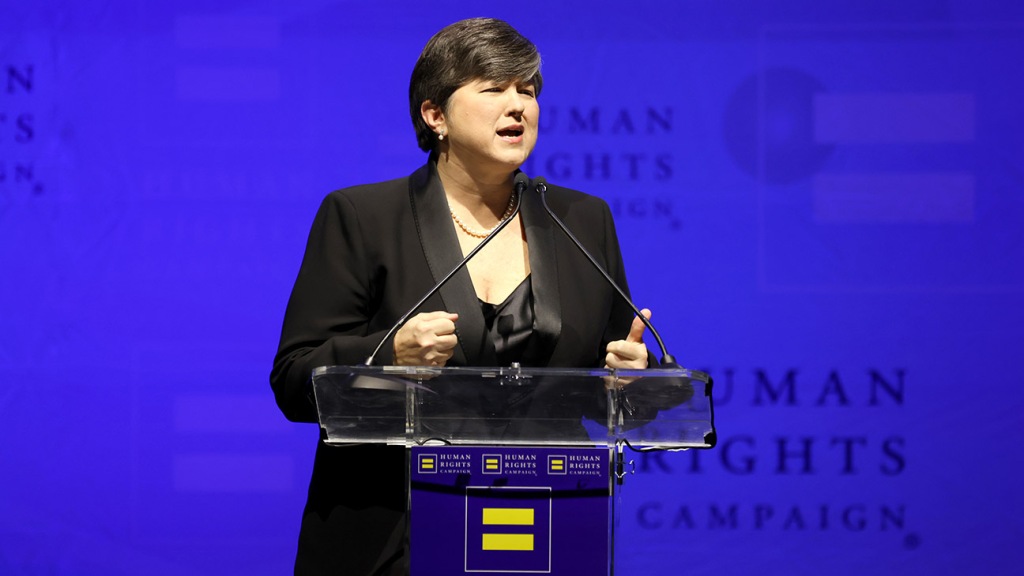 Human Rights Campaign interim president Joni Madison says the LGBTQ organization has already been in touch with Bob Chapek after the Disney CEO committed to pausing all political donations in Florida following internal backlash over its initial silence around the “Don’t Say Gay” bill.

Madison addressed The Walt Disney Company’s latest pledge during the LGBTQ advocacy group’s annual Los Angeles dinner, held Saturday night at the JW Marriott LA Live Hotel. Chapek and Disney’s past public silence on the controversial HB 1557/SB 1834 bill ignited an internal revolt among the company’s LGBTQ employees and their allies, leading to the CEO apologizing Friday for not being “a stronger ally in the fight for equal rights.”

“You may have seen the news earlier this week that HRC is not going to take any funding from Disney until we see them take real action to defeat hateful legislation in Florida,” the HRC interim leader said during her speech at the Saturday event. “I was glad to speak to Bob yesterday afternoon, and we had a very productive conversation about the need for Disney to put real muscle into stopping what’s happening to their employees and to their fans.”

“We need Disney’s partnership in getting the bills heading to [Gov. Ron] Desantis’ desk vetoed. And if that doesn’t happen, to get these bills repealed,” she added.

During the evening, Charlee Corra also took the stage and announced that he along with parents Sheri and Roy P. Disney, the great-nephew of Walt Disney, would match $250,000 in donations to HRC.

In addition to pausing political donations to all Florida state representatives “pending a review,” Chapek also told employees in a company-wide memo that Disney would increase its support for advocacy groups to combat similar legislation in other states and is working on a new framework for its political giving “that will ensure our advocacy better reflects our values.”

Friday’s move came after Chapek announced in a Disney shareholder meeting Wednesday that the company would pledge $5 million to LGBTQ organizations focused on legal protections for the community —  a donation HRC rejected the same day. A source familiar with the situation told The Hollywood Reporter that HRC is still in active discussions with Disney around Chapek’s initial financial pledge as well as the company’s ongoing action around state legislation.

In addition to addressing Disney directly, Madison also acknowledged that the issue is much larger than the single company.

“This is not just about Bob Chapek and Disney,” she told the audience. “It’s gut-check time for every CEO and company [in] America. The tech companies and entertainment companies here who have an influential presence across the country and around the world have an important role to play in fighting state-sanctioned discrimination wherever it exists.”

Madison said the country is “at a tipping point,” similar to the 2016 HB2 anti-trans bathroom legislation, or the “Public Facilities Privacy & Security Act,” in North Carolina and pointed to how companies that “refused to expand business in the state, they pulled out of conferences, they canceled events” impacted the fate of that bill. (It was fully repealed in December 2020.)

The HRC president went on to say that companies need to deliver “more than inclusive employment policies and a clever Pride campaign” and that corporate values should be “guiding principles” in how a company shows up for the marginalized, instead of being “marketing materials.”

“I promise you, states’ lucrative tax laws won’t matter much to your employees and consumers who are being criminalized for supporting their kids and being pushed back in the closet by the legal system,” she said. “We need you to be there for us when it is hard and when it counts.”

HB 1557/SB 1834, dubbed the “Don’t Say Gay” bill, would seek to ban classroom discussion on sexual orientation and gender identity in kindergarten through third grade and has been labeled a government censorship bill by the ACLU of Florida. It would allow parents to sue school districts for what it perceives to be violations of this law.

On Monday, Disney and CEO Bob Chapek sent an internal memo following reports that the company had donated thousands of dollars to Florida representatives that supported and voted for the “Parental Rights in Education” bill. In it, the Disney leader said the company had not released a public statement condemning the bill, which was passed by the state legislation Tuesday and has been sent to DeSantis’ desk to be signed, because “they are often weaponized by one side or the other to further divide and inflame.”