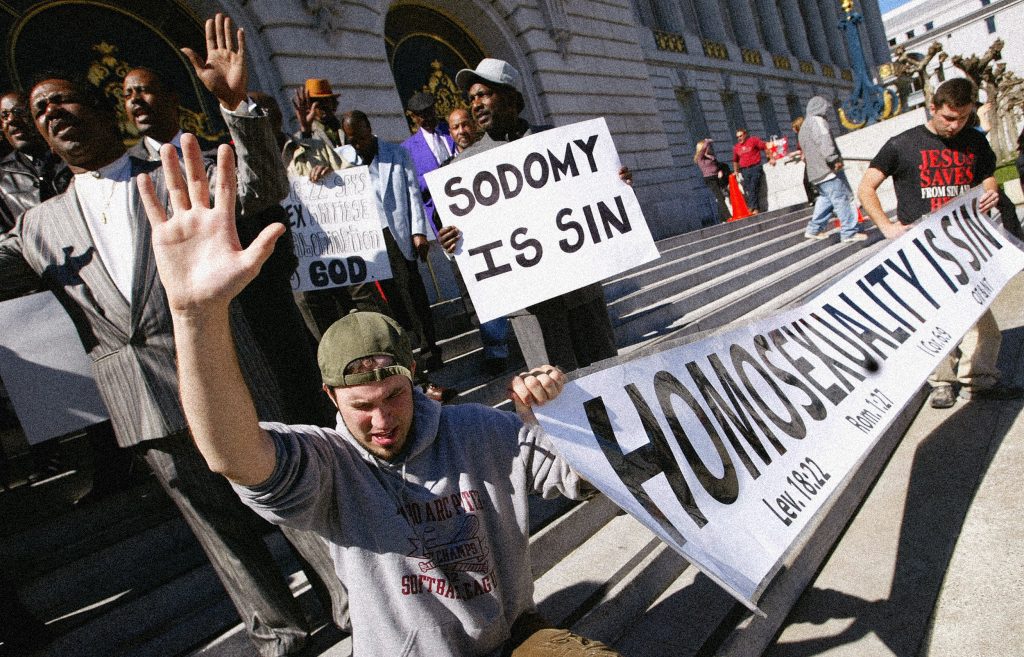 Florida Gov. Ron DeSantis on Monday signed what’s become known as the “Don’t Say Gay” bill, thus codifying in state law a prohibition that doesn’t promote the well-being of Florida’s children but instead drags dangerous, homophobic lies back into the mainstream.

The rise of the QAnon conspiracy theory has brought latent fears of pedophilic pederasts back to the forefront of the GOP base’s concerns.

DeSantis and his fellow Republicans insist that the Parental Rights in Education bill, as it is officially known, is all about protecting children from “age inappropriate” material. That includes an explicit ban on teaching about sexual orientation or gender identity to kids in kindergarten through third grade and a softer ban for older students on materials that are “not age appropriate or developmentally appropriate for students in accordance with state standards.”

The legislative text doesn’t define what is appropriate for older students. Nor does it say specifically that kindergarten teachers can’t read books such as “And Tango Makes Three” — which is about two male penguins who raise a chick — to their class. But as we’ve already seen with the vague bans on “critical race theory” that state legislatures have been passing, the vagueness is the point. Legislators have managed to dodge defending strict censorship by simply steering educators and librarians toward self-censorship instead.

In this way, the law is part of a larger crusade against progressive ideologies gilded in the language of “parental rights.” Supporters claim the state is merely stepping in to correct the “indoctrination” that is occurring in public schools against parents’ wishes.

That includes parents like January Littlejohn, who introduced herself as a “licensed mental health counselor … and stay-at-home mom” and thanked the governor at Monday’s signing ceremony for his focus on this issue. She said she and her husband, Jeffrey, had been cut out of discussions about their child’s gender at their school, which “sent the message that she needed to be protected from us, not by us.”

This lawsuit is mostly about Littlejohn being mad that her child’s feelings were considered over her own.

The Littlejohns sued the Leon County School Board and system administrators in October, alleging they were cut out of meetings with their 13-year-old about their child’s gender. But their lawsuit made clear that their child, A.G., had tried to talk to them about being nonbinary and was rebuffed. Littlejohn even told her child’s teacher that “she thought A.G.’s gender confusion was a direct result of her friend group,” in which three other kids came out as transgender, the lawsuit said.

When the school continued to work with A.G. and tried to accommodate them, the Littlejohns threw a fit at being excluded from the school’s meetings with A.G., according to the suit. When they finally were given the chance to attend an interaction between A.G. and school counselors, the Littlejohns instead demanded that all future meetings be canceled, and at a meeting with the superintendent, they seemed to insist that their child actually had caught “rapid onset gender dysphoria” from their friends, the suit showed.

The Littlejohns’ reaction and their rejection of what A.G. told them is why, in similar cases, some school districts have dealt directly with students. Littlejohn and her husband tried to tell their kid (in so many words), “No, you are not allowed to be nonbinary,” but school officials chose to listen to the child. In effect, this lawsuit is mostly about Littlejohn being mad that her child’s feelings were considered over her own. Similar lawsuits are now explicitly authorized under the “Don’t Say Gay” bill’s provisions.

As that case illustrates, at the core of this new law is the toxic belief that there is no such thing as a gay or transgender minor, only adults who “recruit” a child to the gay or transgender “lifestyle.” According to this belief, the agenda behind that encouragement can be ideological (e.g., the liberal destruction of American family values) or personal (e.g., “grooming” the child to be sexually violated.)

In a tweet from earlier this month that was somehow still up Monday, DeSantis’ press secretary, Christina Pushaw, wrote: “The bill that liberals inaccurately call ‘Don’t Say Gay’ would be more accurately described as an Anti-Grooming Bill.” Pushaw followed that mind-bendingly homophobic statement with the claim that if you oppose the bill, “you are probably a groomer or at least you don’t denounce the grooming of 4–8 year old children.”

That’s the kind of hateful language that for an all-too-brief moment seemed to have fallen out of the mainstream of Republican politics. Despite the GOP spending the better part of the 2000s warning that same-sex marriage would force teachers to promote sodomy, today a slim majority of Republicans support same-sex marriage. Many of the party’s leaders have given up on opposing gay rights as a wedge issue and have at least superficially embraced LGBTQ causes.

But the rise of the QAnon conspiracy theory has brought latent fears of pedophilic pederasts back to the forefront of the GOP base’s concerns. Teaching the very existence of LGTBQ people to children is now being framed as step one on the road to child abuse, assault and molestation — and that framing is receiving either minimum pushback from GOP leaders or its active embrace from the party’s demagogues. We saw as much last week in the appalling performance from GOP senators falsely accusing Supreme Court nominee Ketanji Brown Jackson of not being sufficiently tough in child pornography cases.

DeSantis knows that despite the backlash from LGBTQ advocates and companies including Disney, the bill polls well among former President Donald Trump’s voters. It doesn’t matter to him that it spreads the dangerous idea that being gay or being transgender is something that is taught, and, conversely, that if it isn’t taught, it can be stamped out. It doesn’t matter to him that it promotes a debunked lie that gay men rely on actively recruiting children for future predations.

What matters to him is that he gets to be the first governor in the country to endorse this specific wave of bigotry with his signature, hoping it will pay off for him come 2024. He’s counting on parents like Littlejohn to support a presidential run — even if it means more suffering for kids like A.G.

Hayes Brown is a writer and editor for MSNBC Daily, where he helps frame the news of the day for readers. He was previously at BuzzFeed News and holds a degree in international relations from Michigan State University.