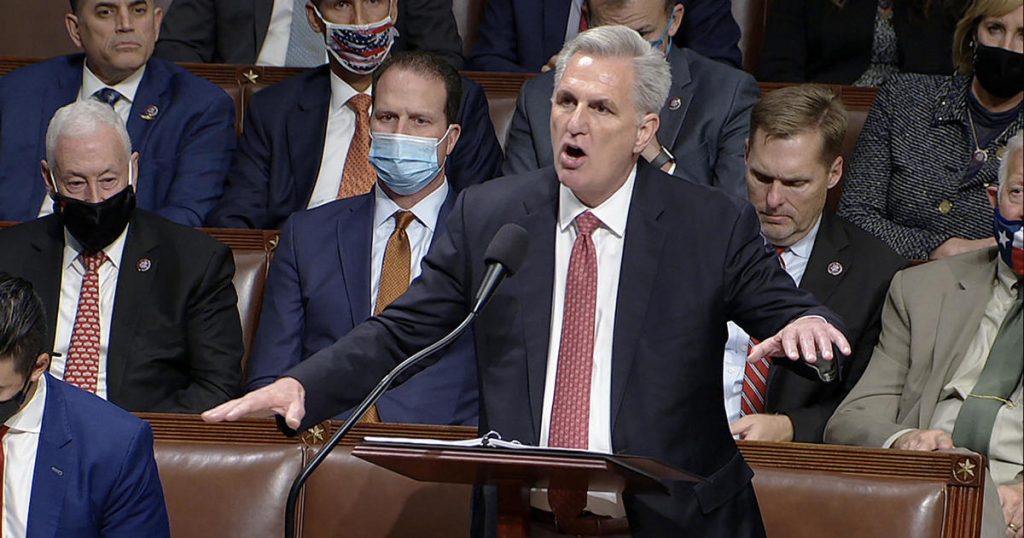 Hoyer says the House will reconvene Friday for vote

Hoyer said the House would recess when McCarthy finishes his remarks.

A senior Democratic aide said McCarthy is “welcome to continue his raving as late into the night as he wants. The House will return and vote first thing Friday morning so the American people know heading into Thanksgiving week that House Democrats are fighting with President Biden to Build Back Better. We thank the Minority Leader for helping us maximize the coverage of our efforts.”

House Speaker Nancy Pelosi issued a statement calling Minority Leader Kevin McCarthy’s lengthy speech on the floor as a “temper tantrum” and disputed some of his comments. Just after 10:30 p.m. ET, McCarthy’s speech had lasted for more than two hours — and he was still going.

Senate Minority Leader has been stalling the vote on Build Back Better by speaking on the floor. Just after 10 p.m. ET, McCarthy had passed the 90-minute mark.

The Republicans also plan to introduce a motion to further debate Build Back Better. Although that motion is certain to fail, it will delay the passage further into the night.

Senate Minority Leader Kevin McCarthy is giving a lengthy speech on the floor ahead of the expected vote on Build Back Better. At one point, he quoted Democratic Congresswoman Abigail Spanberger, saying “nobody elected Joe Biden to be FDR.”

Congresswoman Alexandria Ocasio-Cortez shouted “I did!” and another Democrat said “me too!”

Two moderate Democrats say they will support Build Back Better, but one writes in his local paper that he is a no

Representative Kurt Schrader said he, like fellow moderate Representative Stephanie Murphy, tweeted Thursday that he would be voting for Build Back Better. Schrader, like Murphy, had wanted to see the CBO score before committing to a vote.

Congressman Henry Cuellar of Texas, another moderate, nodded when asked if he would support it. Cuellar was not one of the moderates who signed the letter about the CBO score, but he is one of the more moderate Democrats in Congress.

But Representative Jared Golden of Maine, another moderate, told the Bangor Daily Times that he would not be voting for the bill, citing the SALT deduction.

“Many of my colleagues argue this major line item is worth accepting to pass the rest of the bill,”  Golden said in a statement to the Bangor Daily Times on Thursday night. “I disagree: the SALT giveaway in the Build Back Better Act is larger than the child care, pre-K, healthcare or senior care provisions of the bill.”

With Democrats’ narrow majority in the House, they can only afford to lose three votes unless any Republicans cross the aisle, which is unlikely.

Treasury Secretary Janet Yellen welcomed the CBO’s analysis: noting that the Treasury Department estimates that the crackdown on tax evaders would raise $400 billion, she said in a statement that the combined CBO scores, Joint Committee on Taxation estimates and her own department’s analysis “make it clear that Build Back Better is fully paid for, and in fact will reduce our nation’s debt over time by generating more than $2 trillion through reforms that ask the wealthiest Americans and large corporations to pay their fair share.”

Murphy, one of the moderate holdouts, says she will vote for Build Back Better

Congresswoman Stephanie Murphy from Florida, one of the moderate holdouts on Build Back Better, said she would be voting for it. She had said she wanted to see the full CBO score before committing to a vote.

“While I continue to have reservations about the overall size of the legislation—and concerns about certain policy provisions that are extraneous or unwise—I believe there are too many badly-needed investments in this bill not to advance it in the legislative process,” Murphy said I will work with my Senate colleagues to improve this bill, and I hope to vote on—and enact—a more streamlined version of the bill once it returns from the Senate.”

The White House released toplines on the CBO’s cost analysis, calling it “good news for Democrats.” The White House highlighted that the savings from the prescription drug reforms came in at $300 billion compared to the White House’s estimate of $250 billion.

The White House also continued to insist “that means the bill is fully paid for.”

“As long understood, CBO’s numbers on tax enforcement are lower than the Treasury’s estimates. Democrats have long known and anticipated this – will not be an issue,” the White House said.

The nonpartisan Congressional Budget Office on Thursday released its much anticipated cost estimate of President Biden’s signature social spending plan, Build Back Better. The analysis — commonly referred to as the CBO score — said passage of the legislation would increase the deficit by more than $367 billion over ten years. But the estimate does not include the revenue that could be generated from increasing IRS enforcement.

Over the past several weeks, the Congressional Budget Office had been releasing estimates on individual components of the Build Back Better Act, but the section dealing directly with how much money the legislation would raise as well as its total cost was not released until Thursday.

On Wednesday, the CBO estimated the legislation would include $1.63 trillion in spending. At the same time, changes to the tax code and other provisions would generate more than $1.26 trillion in revenue.

Some of the CBO figures have come in lower than what the Biden administration estimated. The cost of universal pre-K and affordable child care would cost roughly $382 billion, the agency found. Both estimates put affordable housing related costs at roughly $150 billion. Other measures like the cost estimate for expanding Medicare to include hearing was nearly identical, with the CBO saying $36 billion and the White House saying $35 billion.

The CBO also estimated that a four week paid leave included in the House version of the bill would cost $205 billion. That provision was not included in the revised White House framework.

The White House has argued the legislation would be fully paid for and even claimed it would reduce the deficit over time, generating more than $2.1 trillion over 10 years.

In a letter to Democratic lawmakers, House Speaker Nancy Pelosi hinted that there could be a vote on Thursday night, after the CBO office releases its final score. The Rules Committee is meeting to discuss amending a rule that would make some technical changes to the bill so that it complies with Senate requirements.

After the Rules Committee meeting, there will be one hour of debate, a vote on the rule and then the remaining 20 minutes of debate on the bill, she said.

“At the close of the debate, all that remains is to take up the vote – so that we can pass this legislation and achieve President Biden’s vision to Build Back Better!” Pelosi wrote.

If her timeline is followed, the vote on Build Back Better will be Thursday night.

CBO releases last IRS cost enforcement estimate, but it’s only about half the revenue the Biden administration said it would generate

The Congressional Budget Office has released the last IRS cost estimate before it releases the full score. The CBO said passage of the legislation would increase spending by more than $411.5 billion.

The CBO estimated the spending would generate $207 billion in new revenue, far less than the Biden administration claims. Earlier this week, CBO Director Phill Swagel explained ultimately the IRS will determine what additional resources are put toward. But he said research on how increased enforcement acts as a deterrence for tax evasion is mixed, so his office comes down closer to the middle on its impact, whereas others have taken more optimistic positions.

Manchin spotted at the White House, but not for meetings

Senator Joe Manchin, one of the two Senate holdouts on Build Back Better was spotted at the White House on Thursday, but White House press secretary said he was not there for meetings.

Psaki told reporters that Manchin was there for the swearing in of Rahul Gupta, director of the White House Office of National Drug Control Policy.

“And daily reminder that the agreement was never for a CBO score, just more fiscal information–which has now been largely received. Let’s get the vote done,” Jayapal wrote.

House Speaker Nancy Pelosi told reporters on Thursday she hopes the lower chamber can move to a vote on the package known as the Build Back Better Act, later in the afternoon.

“As we think of all of this progress, it’s pretty exciting. This is historic, it is transformative, it will help us build back better with women and all those who have not previously had the full advantage,” the speaker told reporters during her weekly press conference.

CBO says it will release score on Thursday

The Biden administration estimates tax provisions in the framework targeting corporations and the wealthy would bring in more than $2.15 trillion, and the legislation would be fully paid for. But a number of centrist Democrats in the House have said they won’t vote for the $1.75 trillion bill until they know the CBO score.

The White House has already been preparing for a bad score, with deputy press secretary Andrew Bates on Wednesday saying that “there has been wide agreement on the part of everyone involved —  moderates, liberals, et cetera —  that CBO does not have experience analyzing revenue amounts gained from cracking down on wealthy tax cheats who are taking advantage of every honest taxpayer.”