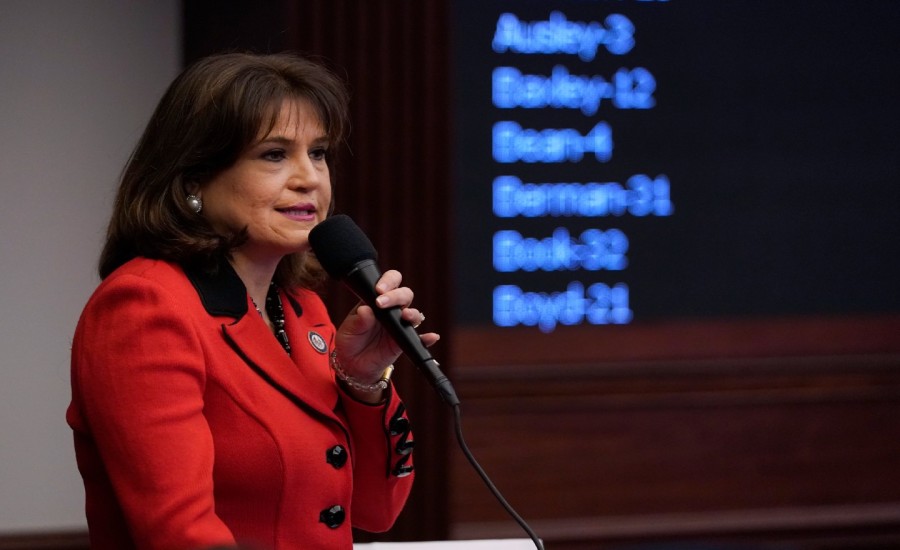 The Congressional Hispanic Caucus campaign arm on Monday will endorse Florida state Sen. Annette Taddeo (D) in a congressional race that is a key Democratic pickup opportunity in the Sunshine State, The Hill has learned.

Bold PAC, the Hispanic Caucus campaign arm, picked Taddeo over two other potential Democratic challengers — including another Latino — vying for the opportunity to run against Rep. María Elvira Salazar (R-Fla.).

“I’ve known Annette for years and have witnessed first hand the kind of public servant she is and the passion that has always driven her to represent her community. As a state legislator, Annette has fought hard to improve the quality of life of working Americans of all stripes in her district,” Bold PAC Chair Rep. Ruben Gallego (D-Ariz.) said.

“As a Member of Congress, she will continue defending a woman’s right to choose and fighting to increase opportunities for American small businesses so they can create better paying jobs,” Gallego added.

The endorsement is the latest in a string of Bold PAC picks in key primaries, often selecting one Hispanic candidate over another.

Taddeo last week dropped out of the Democratic race to challenge Gov. Ron DeSantis (R), and instead opted to run for the nominally competitive Miami-area district.

Her decision to run in a seat that’s flipped parties twice in as many elections could give Democrats a rare chance to unseat a Republican in Florida.

Still, Salazar is the early favorite in the race, as the GOP has taken a stranglehold on Florida politics.

Taddeo is a well-known Florida politician who in 2014 was Democratic Rep. Charlie Crist’s running mate in the gubernatorial race against Sen. Rick Scott (R), who served eight years as governor.

After bowing out of the gubernatorial primary, Taddeo endorsed Crist, who served as Florida’s Republican governor from 2007 to 2011, ran against Scott as a Democrat in 2014, and has served in the House since 2016.

Taddeo said her switch from the statewide race to the House race was largely stoked by the massacre in Uvalde, Texas, where a gunman killed 19 students and two teachers in an elementary school last month.

“Uvalde happened and that is really the moment when I realized I needed to do this. Look, I have a daughter in public school, there has been already at least three instances at her school where we have gotten a threat and the parents had been told with the option to send the kids to school the following day or not,” Taddeo said.

“It was actually my daughter who had a conversation with me and she said, ‘Mom, you need to run for Congress. Your voice is needed. Your leadership is needed,’ and she’s the one that did it,” Taddeo added.

Taddeo said she received support to run from both sides of the aisle, with friends encouraging her to take on Salazar, whose unorthodox rhetoric has at times come under criticism from Democrats and Republicans alike.

Still, Salazar is an incumbent running in a district rated as “solid Republican” by the Cook Political Report, in a red state, in a year where Democrats face tough headwinds.

Taddeo is the first high-profile Democrat to announce a 2022 House run in Miami, where former Democratic Reps. Donna Shalala and Debbie Mucarsel-Powell were voted out of office in 2020.

“It is really important to have a Latina versus Latina [race]; it makes a huge difference. But more importantly, a Latina that has quite a record like me, of working across the aisle getting things done, being there for our constituents, those that vote for us and those that don’t, unlike what we currently have,” said Taddeo.