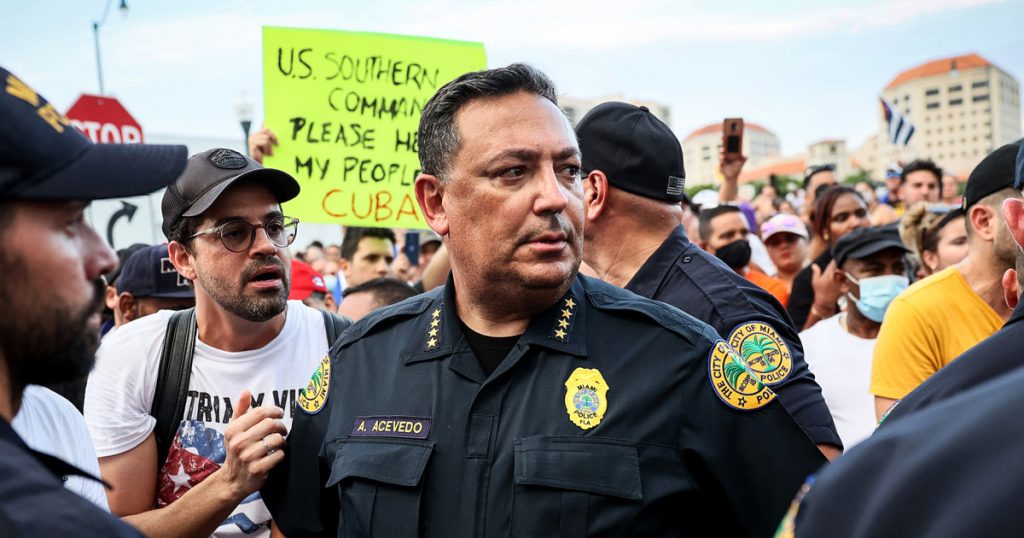 MIAMI — The tumultuous end to the tenure of Miami’s high-profile police chief has left many outside South Florida’s political circles wondering what happened after he arrived on the job six months ago, hailed by many as a nationally distinguished leader in law enforcement.

Mayor Francis Suarez offered a blunt take Tuesday on why Police Chief Art Acevedo’s time in Miami has come to an end.

“While it is clear that Chief Acevedo has the qualifications and the experience to be an effective chief of police, it is also obvious that his personality and leadership style are incompatible with the structure of our city’s government,” Suarez told reporters as he announced support for Miami City Manager Art Noriega, who made the decision to suspend Acevedo and recommend that the City Commission terminate him.

Acevedo, the former Houston police chief, had once seemed a perfect fit to lead the Miami Police Department. He was born in Cuba and would be overseeing the police force of the city with the largest number of Cuban Americans.

In Houston, he had won national praise for being vocal about police reform. After the police killing of George Floyd in Minneapolis last year, he marched with protesters and called for officers to be held accountable when they kill without jurisdiction. He was among the first big-city police chiefs to speak out about police violence.

And he was an outspoken critic of former President Donald Trump, even though he is a Republican himself.

Suarez once praised him as “America’s best chief.”

But the honeymoon was short.

Acevedo clashed with powerful Miami City commissioners who were annoyed by his unexpected appointment by Noriega.

“There were commissioners who didn’t like Art from the beginning and set out to undermine him,” said election lawyer Juan Carlos Planas, a former Republican state representative-turned-Democrat.

Acevedo accused a majority of the commissioners in a scathing memo last month of interfering with an internal investigation and of retaliating against him by eliminating the budget for top positions in the police department.

In the letter to Suarez and Noriega, Acevedo wrote that were he or the police department to “give in to the improper actions described herein, as a Cuban immigrant, I and my family might as well have remained in communist Cuba, because Miami and MPD would be no better than the repressive regime and the police state we left behind.”

The letter was released before a commission meeting at which commissioners scrutinized Acevedo’s background during his tenures in Houston and Austin, Texas. At one point, Commissioner Joe Carollo called Acevedo out for performing as Elvis Presley at a fundraiser in Austin and drew attention to his tight pants in a video.

Commissioners demanded an investigation into Acevedo and the way he was hired, putting pressure on the city manager to fire him.

NBC Miami reported that Acevedo did not officially apply for the position and that he was chosen over more than 50 applicants, including internal candidates.

Noriega, the city manager, said he hired Acevedo after an introduction from Suarez, who said in March, “It was a wonderful recruiting job by our manager to get essentially what is America’s police chief here to Miami.”

He has previously described Acevedo as the “Tom Brady or Michael Jordan of police chiefs.”

Eduardo Gamarra, a professor of political science at Florida International University, said: “You have a very conservative political environment that was opposed to this gentleman before they hired him. Here’s somebody coming in promising to reform the place with a political class that didn’t think it needed reform.”

He added, “It’s very difficult to bring in someone who promises reform into a system that does not welcome it, and especially police reform.”

Suarez said the hostile dynamic between Acevedo and the commission was “unforeseeable” but “simply untenable and unsustainable.”

During his brief tenure, Acevedo also drew criticism from inside the police department and within the community.

He angered some officers when he told a radio station that officers should get vaccinated against Covid-19 or risk losing their jobs.

Acevedo was also caught posing for a photo with a prominent member of the Proud Boys; Acevedo said he did not know who the man was.

Commissioners were particularly angered when Acevedo told about 100 sworn staffers that the 1,300-member police force was run by the “Cuban Mafia.”

He apologized in a tweet, saying that he intended it as a joke and that he did not realize that the late Fidel Castro had used the same phrase to refer to Cuban exiles in Miami.

Planas said he believes the use of the term was “blown out of proportion” and that the commissioners used it as an excuse.

He blamed what he called “dysfunction in the city” for the way the city operates — Miami has neither a strong-mayor government, in which the elected mayor has almost absolute administrative authority, nor a government operated jointly by a commission and a city manager. Miami has a “mayor-city commissioner plan,” or what Planas said was a “hybrid” system “that just doesn’t work.”

“Obviously, the personalities on the commission also contribute to the dysfunction,” he said.

“I just don’t see how anyone from outside Miami will ever want to take a job here ever again. And I’m not just talking about police. I’m talking about any department. … No one is going to want to come here and deal with this dysfunction. And that’s what it is. It’s a highly toxic and dysfunctional environment.”