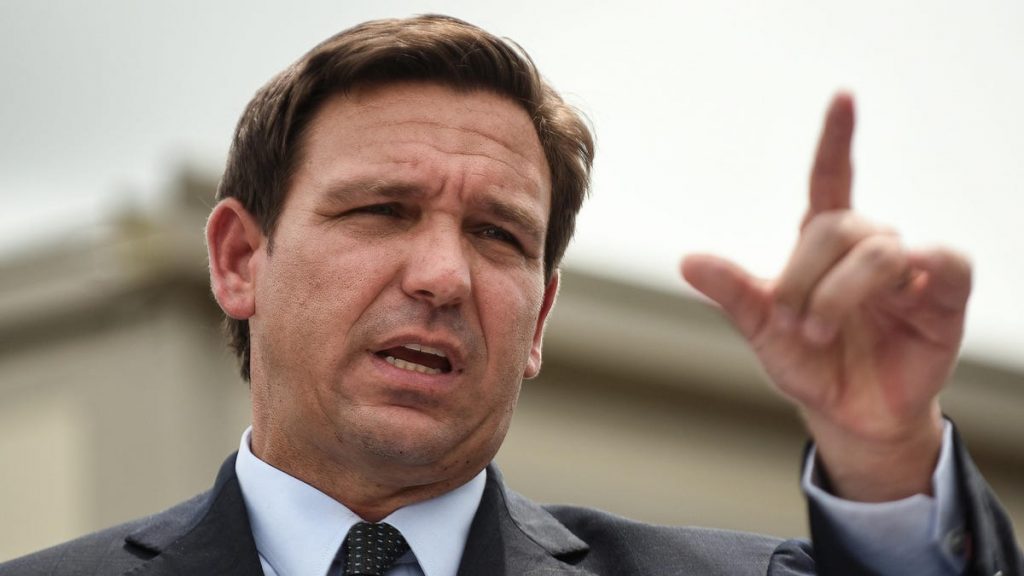 Florida Gov. Ron DeSantis announced Thursday the state is suing the Biden administration over its Covid-19 vaccine mandate for federal contractors—one of a growing number of Republican state leaders who are trying to get around the federal government’s vaccine requirements for both public and private workers.

DeSantis said Thursday the lawsuit would specifically target the Biden administration’s requirement federal contractors get vaccinated—but noted it was likely they could also take further action against other mandates—saying it was “not right” for the federal government to “come in and rewrite” its contracts to “shoehorn” in vaccine requirements, and the state doesn’t believe the federal government has the authority to do so.

South Dakota Gov. Kristi Noem signed an executive order Wednesday allowing any state employee not to comply with a vaccine mandate if they say they have a medical or religious exemption, and the governor said she would work with state lawmakers to pass legislation to extend similar protections to private sector employees.

Alabama Gov. Kay Ivey enacted an order Monday that prohibits the state government from requiring vaccines for its employees and contractors, and stipulates no state official can impose a penalty on a business or individual because they didn’t comply with a Covid-19 vaccine mandate.

Arizona was the first state to sue the federal government over its mandate for private sector employees, and multiple states including Georgia and Missouri have said they also intend to sue the Biden administration over its vaccine requirements for federal employees, which could happen as soon as this week.

“South Dakota is fighting back against President Biden’s illegal vaccine mandates,” Noem said in a statement Wednesday. “Our state has many contracts with the federal government, and President Biden is attempting to use those contracts to force state employees to be vaccinated against their will.”

President Joe Biden has defended his administration’s mandates against the GOP criticism, noting in September he was “disappointed” by their objections and saying about their threats to sue: “Have at it.” “We’re playing for real here. This isn’t a game,” Biden said.

While many states are taking steps to oppose mandates in direct response to the Biden administration, some had already taken action against vaccine requirements by the time the federal government announced its mandates in September. Arizona Gov. Doug Ducey signed an executive order in August that bars local governments from imposing Covid-19 vaccine mandates and says individuals can sue them if they do, for instance, and Montana became the first state to bar private employers from requiring the shots in May.

How successful the GOP-led states’ efforts will actually be, including whether their lawsuits will succeed or if they can actually ban private employers from complying with the federal government’s vaccine mandate. Multiple major companies in Texas like American Airlines and Southwest have already said they would ignore the state’s vaccine mandate ban because the federal government’s requirements take precedence, and legal experts told the Pew Charitable Trust states have little recourse to oppose the federal government’s moves given its sovereignty over state policy. “If the federal law is valid, it’s the supreme law of the land—end of story,” University of Montana law professor Anthony Johnstone told Pew’s Stateline publication.

President Joe Biden ordered in September that all federal government employees and contractors must get vaccinated—strengthening a previous requirement that allowed either vaccination or regular Covid-19 testing—and imposed a vaccine-or-test mandate for all employers with more than 100 workers through OSHA. Neither of those requirements has yet taken effect: Federal workers must be vaccinated by December 8, though the White House has said there’s some flexibility to that deadline, and the private employer mandate will take effect whenever a government review of OSHA’s rule is completed, though business groups have asked the Biden administration to wait to impose it until after the holidays. Vaccine mandates have become a significant controversy since governments and private companies started imposing them as a way to combat vaccine hesitancy, with critics claiming the measures are governmental overreach that violates people’s personal liberties. The measures are popular with a majority of Americans, however, with a September Gallup poll finding approximately 60% of respondents were in favor of both government mandates.