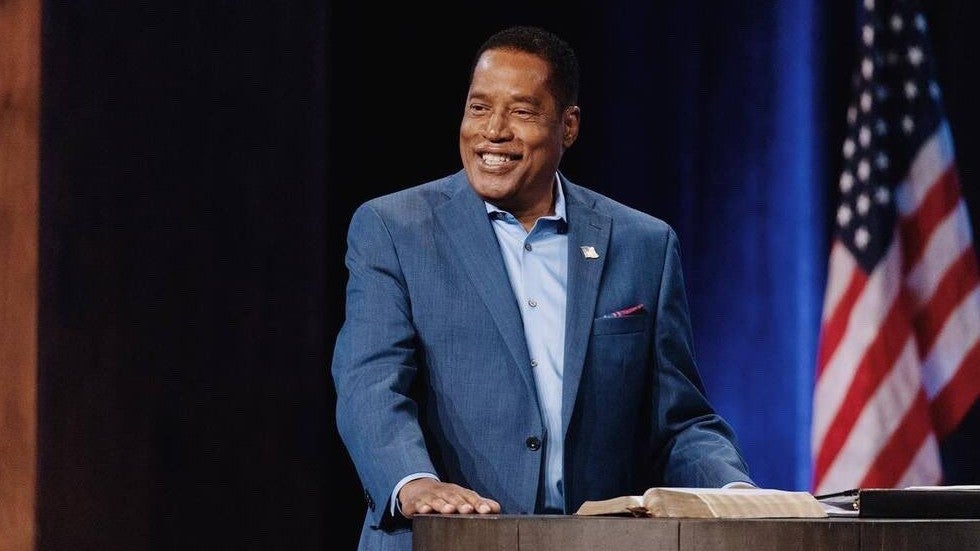 A flood of scrutiny over conservative radio host Larry Elder’s California gubernatorial recall bid over past conduct and controversial remarks is giving Republicans headaches and Democrats hope in the surprisingly close contest.

Elder, who boasts broad name recognition from his radio career, burst into the race in July, becoming a leading contender among the candidates seeking to replace Gov. Gavin Newsom

Gavin NewsomHillicon Valley: Coronavirus content moderation complaints come to Reddit Harris drops plan to campaign with Newsom after Kabul attack Elder’s ex-fiancée files complaint with police over domestic abuse allegations MORE (D) if he gets booted. But allegations that he brandished a gun at his ex-fiancée and made offensive remarks about women are threatening to derail Republican efforts to oust Newsom and could end up providing a lifeline to the governor.

“I think if people are scared of the fact that Larry Elder is going to become the next governor, they’ll just vote ‘no,’ ” on recalling Newsom, said Randy Economy, an early organizer of the recall effort. “Sure, there’s a concern.”

The controversy surrounding Elder is throwing an eleventh-hour curveball into the months-long effort by Republicans to boot Newsom.

The recall election is being held on Sept. 14, and voters will answer two questions on their ballots: first, if Newsom should be ousted, and second, who should replace him. A majority is needed on the first question to remove the governor, while a plurality is needed on the second to anoint his replacement.

Republicans had been riding high for months over their chances of recalling Newsom. The campaign was started last year over a slate of issues, including his handling of the coronavirus and wildfires, but swiftly gained traction earlier this year over backlash against school and business closures and pictures showing Newsom hobnobbing with political allies at an indoor restaurant.

That enthusiasm culminated in recent surveys showing the contest surprisingly close in the deep-blue state. In a CBS News poll, 52 percent of likely voters said Newsom should not be recalled, while 48 percent said he should be.

But the brewing controversy surrounding Elder could hand Newsom a lifeline.

“I’m kind of afraid that he’s going to mess everything up,” longtime GOP activist Allen Wilson said of Elder.

The scandal around Elder, whose campaign did not respond to requests for comment for this article, landed last week when Politico interviewed Alexandra Datig, an ex-fiancée who said Elder displayed a gun during an altercation.

CNN followed up with a report detailing his controversial remarks about women, including him once saying that “women exaggerate the problem of sexism.”

Datig on Wednesday ramped up the pressure, filing a formal complaint with the Los Angeles Police Department over “several incidents of domestic violence,” including when he allegedly brandished his gun.

Beyond those controversies, Elder is the subject of an investigation by California’s Fair Political Practices Commission over allegations he did not properly disclose aspects of his finances and business.

Elder has largely kept his head down but did issue a tweet accusing his opponents of employing “politics of personal destruction.”

“These are salacious allegations. People do not get into public life precisely because of this type of politics of personal destruction. I am not going to dignify this with a response—it’s beneath me,” he added in a statement after Datig filed her complaint.

Datig told The Hill that “I’m not the one who has to come clean, he does,” while Democrats are leaping at the chance to make Elder the face of the recall.

Operatives say such a controversy around a figure with broader name recognition than any other candidate hands Newsom an opportunity to run against a specific person rather than a sprawling field of candidates who are either unknown or noncompetitive.

And with former President Trump

“Larry Elder seems to be the gift that keeps on giving in that department,” said Steve Maviglio, a former aide to former Gov. Gray Davis (D), who was the last California governor to be recalled in 2003. “Because his views are so extreme, the Newsom campaign has been able to really use it as a foil about what could happen if there’s a recall.”

Besides giving Newsom a clear opponent, Elder could also serve to gin up enthusiasm among Democrats. While the first million ballots show a strong showing for Democrats, the party has been concerned over polls showing Republicans more likely to vote in the recall election.

“I’ve always thought the recall would fail just because it’s just such a mathematically challenging hill to climb,” said Maviglio, referencing the overwhelming blue tint in California. “But the question always was, could you get Democrats motivated to vote? And I think Larry Elder has been a big part of the equation in making the answer to that yes indeed.”

To be sure, Republicans stress the recall effort is alive, pointing to polls showing the results surprisingly tight on recalling Newsom on the first question.

“I don’t think there’s any doubt in my mind that this recall will pass,” Economy said, despite his concerns.

Among the reasons Republicans are hopeful is that the reasons the recall was launched in the first place still plague Californians. The coronavirus is making a comeback in the form of the delta variant, the debates over school and business closures and mask mandates rage and wildfires still wreak havoc.

“Larry Elder’s views on women are of a critical nature, but they don’t impact people’s self-preservation like the rest of these issues do,” said Anne Dunsmore, campaign manager of Rescue California.

Still, Democrats say it is precisely those issues that could lead voters to back Newsom if they think Elder is the alternative.

“We want to motivate them, make it clear that ‘Hey, you may not be thrilled with how things are going right now, whether that be because of COVID or forest fires, but you do not want Larry Elder to be the governor because he would be far worse at dealing with them,’ ” said California-based Democratic consultant Tyler Law.

The help Newsom could get from Elder only compounds the structural advantage he enjoys running in the Golden State.

Democrats hold a nearly 2-to-1 advantage in voter registration, and while Newsom has caught flack, that edge has kept his approval ratings from tanking into the 20s and 30s.

And beyond the recall, Elder could lend Newsom a hand should he run for reelection in 2022 by kneecapping some of his would-be successors who are also eyeing runs next year.

“I mean, if they come out of the recall in single digits, how do you pose yourself as a viable candidate against Newsom in 2022,” said Garry South, who served as the senior adviser to Davis and has been an adviser to Newsom.

Still, Newsom is not technically running against Elder, and his efforts to tag him as his opponent may be limited. And if the governor is indeed recalled, Elder could remain in a strong position.

Other replacement candidates have been mired in the single digits in polls, and with such a short runway until Sept. 14, Elder’s scandals may not be able to sink into the electorate enough to hurt him in a race where he needs a simple plurality.

“Probably the people who have known and followed the work of a candidate over a long period of time, revelations aren’t going to make a big difference,” said Mark Baldassare, president of the Public Policy Institute of California.

That dynamic has some Republicans worried, because as much as many want to oust Newsom, they’re skeptical Elder has what it takes to lead the world’s fifth largest economy.

“I’m concerned because I don’t know if he’s actually ready to be in office,” Wilson said. “I’m concerned for the Republican Party of this state because, I mean, how low can we really go? I think he might be the lowest.”