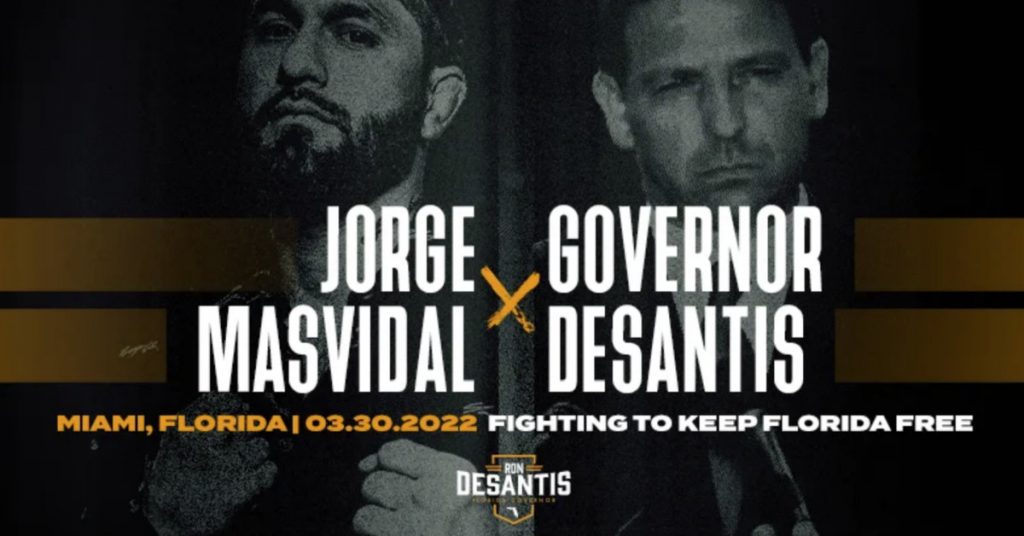 According to Florida Politics, DeSantis’ campaign advertised a “DeSantis x Masvidal VIP Experience” for early arrivals who contribute $250 to his gubernatorial re-election bid. Each guest will reportedly an opportunity to “mix and mingle with Jorge Masvidal before the event begins.”

The campaign event takes place less than a week after Masvidal was arrested for allegedly attacking his ex-teammate, Colby Covington. The police report, which did not name the victim of the suspected attack, revealed that Masvidal approached him wearing a hoodie and blue surgical mask outside a Miami restaurant and blindsided him with two punches to the face, which resulted in a fractured tooth and a wrist abrasion.

Masvidal surrendered himself to the police and has since been charged with aggravated battery causing great bodily harm. He entered a written plea of not guilty and was released later that same night after posting a $5,000 bond.

If found guilty, Masvidal could face up to 15 years in prison and/or a $10,000 fine for second-degree felony aggravated battery with additional penalties possible for the criminal mischief charge.

Wednesday’s campaign event is not the first time that Masvidal will be featured at a political event. The UFC fighter repeatedly campaigned for former president Donald Trump, including headlining a “Fighters Against Socialism” bus tour with Donald Trump Jr. During the tour, Masvidal espoused the “horrors” of communism and socialism.

“Obviously I am not a politician,” Masvidal told the crowd during one of campaign stops. “I may not be schooled in a lot of these political issues like some of you, but I do know Latinos. Latinos are not lazy people looking for a handout. Latinos don’t want free stuff, we want freedom.”

“Welcome to Florida,” DeSantis said at the UFC 261 pre-fight press conference. “You guys aren’t the only ones looking to come to this oasis of freedom.”