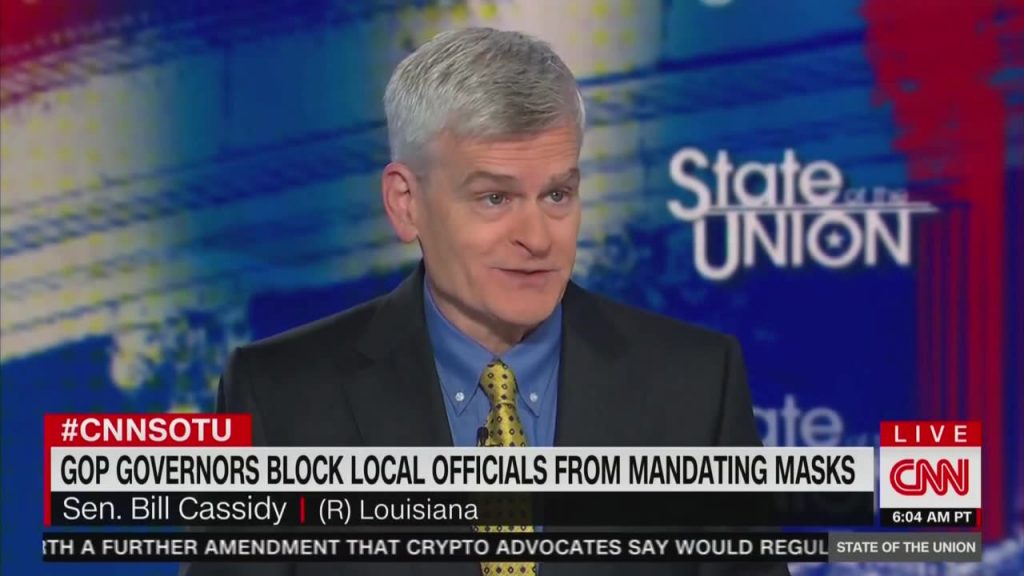 Sen. Bill Cassidy (R-LA) distanced himself from one of his party’s biggest stars on Sunday, saying he disagrees with Florida Gov. Ron DeSantis’ decision to ban local mask mandates amid a dramatic surge of coronavirus infections and hospitalizations.

Despite Florida representing one in every five new COVID-19 cases in the country and the state’s ICUs and hospitals reaching capacity, DeSantis recently pushed Florida’s health and education departments to issue a rule barring school districts from implementing mask mandates. The executive order has already been met with multiple lawsuits, with parents noting that many children are currently too young to receive a coronavirus vaccine.

With his own state of Louisiana currently facing record-high hospitalizations and cases, largely due to the state’s low vaccination rate, Cassidy was asked by CNN anchor Dana Bash if he felt it was the “right move” by Louisiana Gov. John Bel Edwards to issue a new mask mandate.

“Now I’m going to speak as a doctor,” Cassidy, who is a physician, replied. “If you have a large percentage of your population that’s not vaccinated and your infection rate is going up, you’ve got one or two choices. If you’re inside, you’re vaccinated or have to wear a mask. Otherwise, you’re at too great a risk to further spread infection, to further pack those emergency rooms, to further prevent people who have terrible accidents from getting cared for because the hospital is full of COVID.”

Bash then noted that Republican governors such as DeSantis and Texas’ Greg Abbott have blocked local COVID-19 restrictions despite their states’ rising cases, asking the conservative lawmaker if he felt local officials should be allowed to implement mask mandates.

“I’m a conservative. I think you govern best when you govern closest to the people being governed,” he said. “If a local community is having—their ICU is full and people at the local schools see they’ve got to make sure they stay open because otherwise children will miss out for another year of school and they put in policies, then the local official should be listened to. That is a conservative principle.”

Bash wondered aloud if Cassidy was explicitly disagreeing with DeSantis, prompting the Louisiana senator—who has become increasingly critical of the Trump wing of the party—to acknowledge he was indeed.

“I do disagree with Gov. Desantis,” Cassidy added. “Local officials should have control here. I don’t want top-down from Washington, D.C. I don’t want top-down from a governor’s office. Sometimes in cases of national defense, things like that. But if my hospitals are full, vaccination rate is low and infection rate is going crazy, local officials should be allowed to make those decisions.”

The CNN host also wanted to know if Cassidy felt DeSantis was playing politics with this decision. While the senator said he didn’t want to “guess other people’s motives,” he did say that “whenever politicians mess with public health it doesn’t usually work out well for public health and ultimately doesn’t work out for the politician.”