Giroux traded to Panthers by Flyers for Tippett, first-round pick 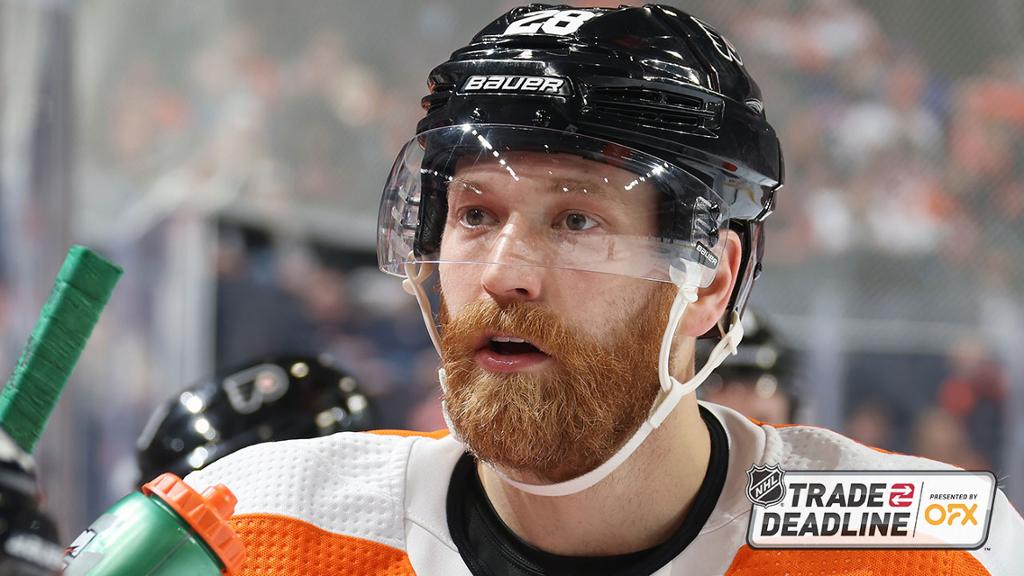 Claude Giroux was traded to the Florida Panthers by the Philadelphia Flyers on Saturday.

“Claude has been one of the most complete talents in the National Hockey League for over a decade,” Panthers general manager Bill Zito said. “He has demonstrated his elite leadership and work ethic during his tenure in Philadelphia and we are thrilled to be able to welcome a player of his caliber to our lineup. Additionally, we are excited to receive Connor and German into our Panthers pipeline and look forward to their growth within our system.”

Giroux is in the final season of an eight-year contract and can become an unrestricted free agent after the season. The contract contained a no-move clause. The Flyers retained 50 percent of Giroux’s remaining salary.

“Any day that you trade your captain is a tough day, and with how much Claude has meant to this organization and how he has represented himself for 15 years, makes it all that more difficult to say goodbye,” Flyers general manager Chuck Fletcher said. “Claude is one of the best players to ever wear a Flyer uniform.”

Giroux played his 1,000th NHL game Thursday and was honored in a pregame ceremony. Afterward, he spoke as if he’d be moving on and recalled that Philadelphia traded forward Wayne Simmonds to the Nashville Predators on Feb. 25, 2019.

“To be honest, I’ve seen a lot of players that I played with that I liked (leave),” Giroux said Thursday. “I know it’s tough when you leave a team, but I actually didn’t realize how tough it is. I wish I knew back then, but it’s not something that is really fun. But at the same time, we were just all day telling stories and [remembering] things that happened the last few years, and it was great.”

He was not with the Flyers for a 3-1 loss at the Ottawa Senators on Friday. Philadelphia (19-31-11) is tied for last in the Metropolitan Division with the New Jersey Devils.

“I think that everybody sort of knew it was coming,” Flyers coach Mike Yeo said Sunday. “It was almost like every day was different. I think Friday, you kind of knew it was coming. Knew what that game meant. Then you go into Ottawa and it kind of hits and sinks in that he’s not there.

“I’m happy, sort of, for everybody that it’s done. I’m happy for ‘G.’ I think it’s going to be a great situation for him. Great opportunity for him to hopefully go win that Stanley Cup. A very deserving player. I know he’s going to a great situation there. I’m also happy for our group. I think Chuck did a great job. I think Owen is going to be a great fit here for us. Really help us get going here in the right direction.”

Philadelphia reached the Stanley Cup Final in Giroux’s second full season (2009-10, lost to the Chicago Blackhawks). The Flyers have made the Stanley Cup Playoffs four times since 2011-12.

“It’s impossible to put into words just how much Claude Giroux has meant to the Philadelphia Flyers organization. He is the longest serving captain in Flyers history, only the second Flyer to play 1,000 games in the orange and black, and a seven-time All-Star, but all of that still doesn’t fully capture what he has meant to this city and this proud franchise,” Flyers chairman Dave Scott said. “This is a difficult, bittersweet day, but we are excited to watch Claude compete in the playoffs for Florida this year, and there is no question that Claude will always be a Flyer.”

“Been a difficult season, to put it mildly,” Fletcher said. “I don’t think neither Claude nor (we) thought it would get to this point. I think we had higher aspirations for this season. We are where we are. It’s been a lot of work the last few weeks. This is where we arrived at.”

Florida (42-14-6) is first in the Atlantic Division and Eastern Conference.

Tippett is in the final season of a three-year, entry-level contract he signed with the Panthers on July 19, 2017, and can become a restricted free agent after the season.

“I’m really excited for this new opportunity to join a team, build with them and get a fresh start,” Tippett said. “I’m still working on trying to round out my 200-foot game, but overall I think I can bring offense, size (6-foot-1, 207 pounds) and speed to the lineup. I’m really excited to get going and meet everyone.”

Tippett, who was the No. 10 pick in the 2017 NHL Draft, is in his second full season with the Panthers and has scored 33 points (14 goals, 19 assists) in 94 NHL games. He scored four points (one goal, three assists) in six playoff games last season.

“We’re very excited to have Owen join our team,” Fletcher said. “He is a young forward who already has NHL experience and will bring power, speed and skill to our group. He is someone we expect to fit into our lineup immediately.”

Bunnaman has no points in 15 NHL games this season and scored 11 points (six goals, five assists) in 41 games with Lehigh Valley of the American Hockey League. The 23-year-old is in the final season of a two-year contract he signed with the Flyers on Aug. 20, 2021, and can become a restricted free agent after the season.

Selected by Philadelphia in the fourth round (No. 109) of the 2016 NHL Draft, Bunnaman has scored three points (one goal, two assists) in 54 NHL games.

Rubtsov has not played in the NHL this season; he has scored six points (two goals, four assists) in 37 AHL games. The 23-year-old signed a one-year contract with the Flyers on June 14, 2021, and can become a restricted free agent after the season.

Selected by Philadelphia in the first round (No. 22) of the 2016 draft, Rubtsov has no points in four NHL games.