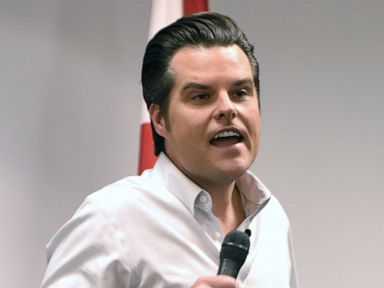 As the federal investigation into Florida Rep. Matt Gaetz continues into the summer, sources tell ABC News that Gaetz’s one-time wingman has been steadily providing information and handing over potential evidence that could implicate the Florida congressman and others in the sprawling probe.

Former Seminole County tax collector Joel Greenberg, as part of his ongoing cooperation with prosecutors, has provided investigators with years of Venmo and Cash App transactions and thousands of photos and videos, as well as access to personal social media accounts, sources said.

Private messages exclusively reviewed by ABC News potentially shed new light on the process by which Greenberg allegedly met women online who were paid for sex, and introduced them to the Florida congressman and other associates.

Greenberg pleaded guilty in May to multiple federal crimes, including sex trafficking of a minor and introducing her to other “adult men” who also had sex with her when she was underage. Greenberg agreed to provide “substantial assistance” to prosecutors as part of their ongoing investigation.

Gaetz, who currently sits at the center of the ongoing federal sex trafficking investigation into allegations that he had sex with a minor who he also met through Greenberg, has vehemently denied any wrongdoing and has not been charged with any crime.

ABC News has reviewed Google Voice text messages from September 2018 that appear to show Greenberg texting with a woman he met online. In the texts, Greenberg appears to discuss payment options and asks the woman, who was of legal age, if she would take drugs; he then sets up a get-together with himself, Gaetz, the woman, and one of her friends.

“I have a friend flying in and we are trying to make plans for tonight. What are your plans for later,” Greenberg wrote to the woman, whose identity ABC News is withholding for privacy purposes. “And how much of an allowance will you be requiring :)” Greenberg added.

The woman responded by telling Greenberg she has “a friend who introduced me to the website that I could bring” and said she “usually” requires “$400 per meet.”

Greenberg then sent the woman a photo of Gaetz taking a selfie with students at Pea Ridge Elementary from a 2017 visit, and wrote, “My friend,” indicating that Gaetz would be the friend joining him.

Greenberg then replied that Gaetz was “down here only for the day,” adding “we work hard and play hard,” before asking, “Have you ever tried molly,” referring to the drug MDMA, or Ecstasy.

As Greenberg was discussing payment for the get-together, the woman asked if Gaetz used the same website Greenberg had used to meet her. Greenberg replied, in part, “He knows the deal :),” referring to the Florida congressman. The former tax collector then said he would book a “suite Downtown” for the gathering.

Asked about the allegations reported in this article, Harlan Hill, a spokesperson for Gaetz, told ABC News, “After months of media coverage, not one woman has come forward to accuse Rep. Gaetz of wrongdoing. Not even President Biden can say that. That others might invite people unbeknownst to a U.S. Congressman to functions he may or may not attend is the everyday life of a political figure. Your story references people the congressman doesn’t know, things he hasn’t done and messages he neither sent nor received.”

“Rep. Gaetz addressed the debunked allegations against him — and their origin in an extortion plot — during his Firebrand podcast episode last week,” Hill added. “People should download and watch.”

Gaetz himself has also forcefully pushed back against reports of the investigation. After the self-described “sugar daddy” website Seeking.com released a statement claiming to have “no knowledge of Mr. Gaetz ever having an account on the website,” Gaetz said on Twitter that “we are seeing the collapse of the Fake News media’s lies.”

However, The New York Times reported in April that investigators believe it was Greenberg who initially met women through online sugar daddy websites — which connect people who go on dates in exchange for gifts and allowances — and then “introduced the women to Mr. Gaetz, who also had sex with them.”

Additional Facebook messages reviewed by ABC News paint a similar picture, showing Greenberg appearing to organize a gathering in July 2018 that included Gaetz and women the former tax collector had allegedly been paying for sex, at the home of Jason Pirozzolo, a Florida hand doctor who founded a medical marijuana advocacy group and, according to reports, allegedly accompanied Gaetz on a 2018 trip to the Bahamas that investigators are scrutinizing.

The Facebook messages also appear to show Greenberg offering to introduce a Florida media entrepreneur at the meet-up at Pirozzolo’s home, which Greenberg described as “our safe place.”

“You should come meet the group,” Greenberg wrote to the entrepreneur, according to the messages. He then mentioned the names of two girls repeatedly featured on the former tax collector’s Venmo transactions, which ABC News has reviewed.

“I think it would be a wise investment of time. You might already know Jason Pirrazolo … but I’d like for you to meet Congressman Matt Gaetz,” Greenberg wrote. “Gaetz is a wild man, but great dude.”

Greenberg said in the message that the party would have “6-7 chicks” and “just 3-4 guys.” He then provided directions to Pirrazolo’s house, adding, “It’s our safe place, all things considered.”

A few days after the date of the July gathering, the entrepreneur posted a photo on Instagram that appeared to come from a separate get-together and includes the two young women Greenberg had mentioned in his private messages. ABC News is withholding the names of the two women for privacy purposes.

It’s not immediately certain if the gatherings Greenberg was working to arrange in July and September of 2018, over the private messages reviewed by ABC News, ultimately took place around those specific dates. Greenberg had arranged similar gatherings at hotels in the Central Florida area and at friends’ houses, including Pirozzolo’s, with the congressman in attendance, multiple sources who attended the gatherings in the past told ABC News.

Contacted by ABC News, Greenberg’s attorney, Fritz Scheller, said, “The only comment I can make is Joel Greenberg has executed a plea agreement with the government and will continue to honor his obligations pursuant to that agreement.”

Last month, a judge granted a request by Greenberg to delay his sentencing for three months, citing the breadth of his continued cooperation with federal prosecutors.

“Mr. Greenberg has been cooperating with the Government and has participated in a series of proffers,” Scheller wrote in a filing requesting the delay. “Said cooperation, which could impact his ultimate sentence, cannot be completed prior to the time of his sentencing.”

Prosecutors did not oppose the delay and a judge approved it a day later.

While Gaetz has appeared to distance himself from Greenberg since news broke regarding the investigation, he previously described Greenberg to acquaintances as his “wingman” and also publicly floated the former tax collector as a potential congressional candidate.

“Joel Greenberg has gone into the Seminole County Tax Collector’s Office, he’s taken it by storm,” Gaetz said in a radio interview on WFLA in June 2017, in which he pushed Greenberg to run for Florida’s 7th congressional district.

“He’s been a disrupter,” Gaetz said of Greenberg. “And if you look at what people want in the country right now, they want that disrupter. And they want someone who is not going to adhere to the dogma that has strangled progress in Washington, D.C., for a generation.”