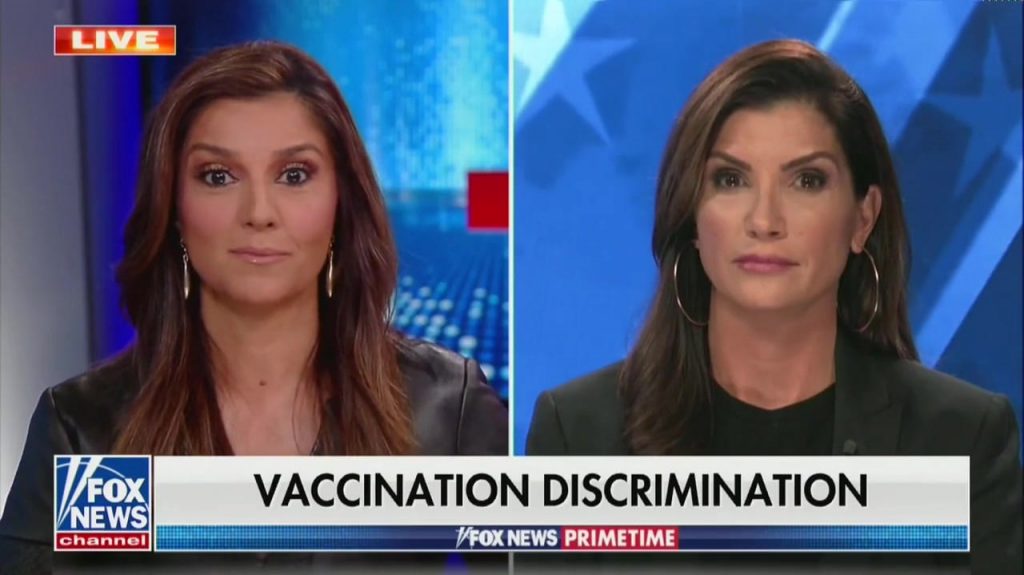 Fox News host Rachel Campos-Duffy compared COVID-19 vaccine mandates and restrictions to “apartheid” on Tuesday night, even though the network that employs her currently has a system in place to track their employees’ vaccination status.

Sitting in as this week’s host of Fox News Primetime, Campos-Duffy complained that it was “creepy” that doctors are now advocating for stricter restrictions on unvaccinated Americans as the Delta variant continues to run wild, especially in areas with low vaccination rates.

She specifically took issue with remarks made by former Baltimore health commissioner Dr. Leana Wen, who said recently that it “needs to be hard for people to remain unvaccinated” and that the “point is to make vaccination the easy choice.” The Fox host also cited another Florida doctor who said she won’t treat unvaccinated patients in person.

Turning to right-wing talk radio host Dana Loesch for reaction, Campos-Duffy then claimed businesses, schools and localities mandating vaccines was akin to South Africa’s policy of segregation and discrimination based on race.

“We are starting to see this sort of apartheid-type vaccination system where, you know, if you are vaccinated you get certain privileges,” the former Real World star declared. “If you are unvaccinated because, you know, you don’t want to take the vaccine or you have natural immunities because you already had COVID, you’re going to be denied certain privileges, including seeing your doctor.”

Agreeing with Campos-Duffy, Loesch said that “coercion and bullying is not science” before parroting the Fox host’s comparison.

“Really, ultimately, having this apartheid, this quasi-apartheid system where—instead of answering questions that still absolutely do linger because I have issues within my family—I have people in my family who cannot get vaccinated because they have a health issue,” the conservative pundit continued. “They are cancer survivors and they can’t go get the vaccine. I have other individuals that fit into a certain demographic in my family that are looking at organ tissue inflammation.”

Campos-Duffy and Loesch aren’t the first right-wing media figures to liken vaccination guidelines to apartheid, as pro-Trump provocateur Charlie Kirk told Fox News’ Tucker Carlson in July that vaccine requirements resemble an “apartheid-style, open-air hostage situation.” Carlson and other Fox News personalities, meanwhile, have loudly railed against vaccine mandates and passports, claiming they are a form of “social control” while downplaying or questioning the shot’s efficacy.

Yet, while its on-air personalities decry vaccination efforts, Fox News’ parent company has put in place a system that is similar to a vaccine passport that even the Biden administration has applauded. Fox has also ordered all Fox News staff members to reveal their vaccination status in a company database, with vaccinated employees able to avoid certain COVID-19 restrictions.